‘BJP-SP Down Down’ Reverberates In Bangalore Protest Against Section 377 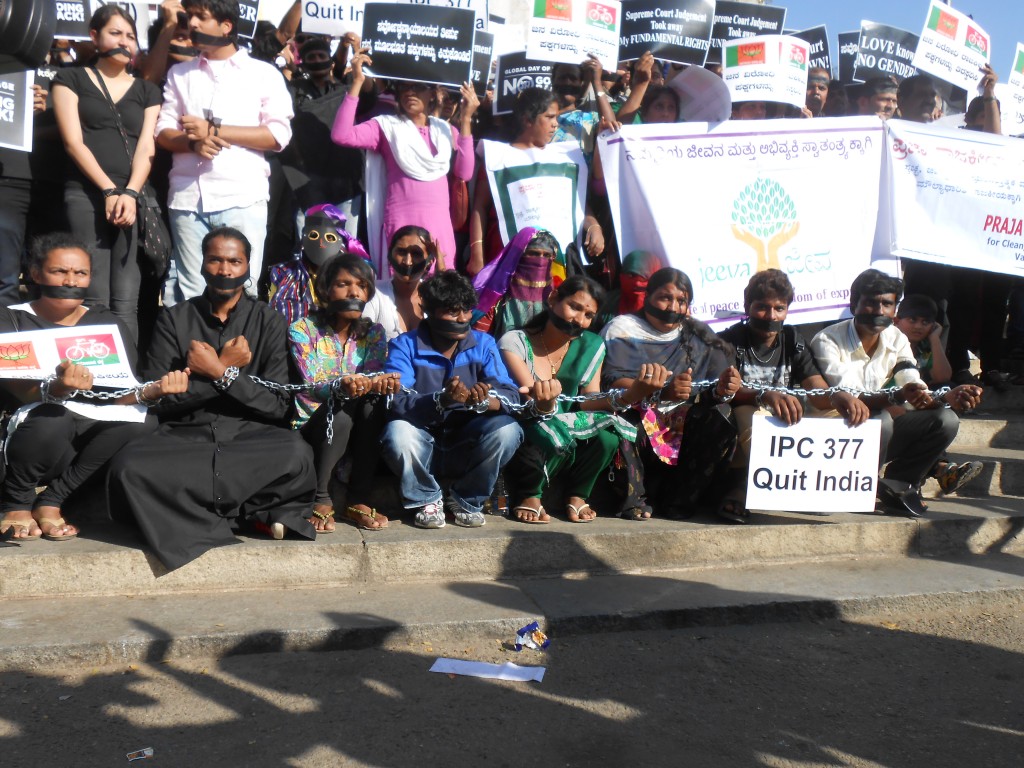 Protesters chain their hands in Bangalore

Nearly 1000 people protested against the recent ruling of Supreme Court on Section 377 of the Indian Pencal Code, in effect re-criminalising homosexuality. The protest, which began at 3:30 pm in Bangalore, was part of a worldwide movement which marked Dec 15 as Golbal Day of Rage against the Indian Supreme Court verdict.

For the first one hour, protesters tied black clothes around their mouth and tied their hands too with black clothes. A few of them even chained themselves to show how the law now chains their freedom. This was followed by sloganeering for the next one hour. People present there shouted slogans like “We Want Justice”, “LGBT Zindabad”, “377 Repeal Karo” and “Awaz Do Hum Ek Hain”. The recent stand taken by Bharatiya Janta Party (BJP) and Samajwadi Party(SP) to oppose any amendment to Section 377 attracted the ire of protesters, who shouted “BJP Down Down”, “SP Down Down” and “BJP Shame Shame”.

Later, protesters also burned an effigy of IPC 377 and Manusmirti, which they said was a regressive text that encouraged inequality and oppression based on caste, sexuality and other social hierarchies. They later sat down and sang songs like “We shall overcome”, “Tayab Ali pyaar ka dushman” and “Jab pyaar kiya toh darna kya?”

Famous writer and actor Girish Karnad too joined the protests in the city. The protest ended around 6pm, with organizers asking those present to brace up for more demonstrations to be held soon.