Kolkata all set to march on July 15th

Come this Sunday and the City of Joy will turn into a City of Colours, with the LGBT community of Kolkata all set to walk under the rainbow flag. Preparations for the walk have been underway for a month now, with a poster making workshop being held in the American Center in Kolkata. The walk will take place on July 15, 2012 and will start from Hazra More at 4.30 pm and end outside the Academy of Fine Arts, with a public meeting and few cultural performances planned after the parade. 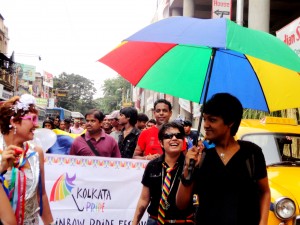 Kolkata has the distinction of being the first city in India to hold a gay pride march in 1999. “Kolkata has always been about tolerance and celebration of liberty. Over these two decades of the movement, several wings of civil society, including academia, artist community, human rights workers and the media have been a beacon of support towards reaching out and lending courage to the voice for equal rights,” reads a statement by KRPF (Kolkata Rainbow Pride Festival)- organizers of this year’s parade.

Students of the New Gender Studies course taught by the Dept. of English, University of Kalyani, around 50kms from Kolkata, have already got T-shirts printed that read “Endanger Gender”. The march has received support from outside the city, with two online groups- Jub We Talk and Desiboys- sending in around 600 masks for those who would like to walk without revealing their identity.

While last year the march was preceded by two weeks of celebrations, which included movie screenings, panel discussions and a small fair (mela), this year the celebrations have been mostly low, with only an Art Exhibition being organized in June.