Nepal to Celebrate Pride along with Gai Jatra Festival in August 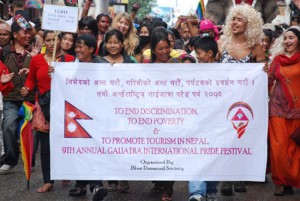 With Indian cities hosting gay pride marches recently, it is time for neighbouring Nepal to paint the streets in rainbow hues. The 3rd Gaijatra International Pride Festival will be held on 3rd August 2012 in Lakeside, Pokhara, Nepal.

This annual festival has become one of Blue Diamond Society’s (BDS) premier events and draws crowds of local supporters as well as tourists, to join in on the fun and enjoyment of the festivities. Although BDS has been celebrating this unique festival for the last 10 years, they have been especially promoting it as an International Pride Event for the last two years. The theme for this year’s Gai Jatra is “Bringing Friends and Families Together for Solidarity towards Equality, Protecting Mountain Eco-systems and Promoting ‘Visit Lumbini Year 2012’ in Nepal.”

The festival of “Gai Jatra” is one of the oldest and most unusual of the many festivals celebrated by the Hindus/Buddhists of Kathmandu Valley. Some say the custom goes back more than a millennium, to the time of the Licchavi kings. Falling on the day after Janai Purnima, the full moon day of August, Gai Jatra is a day for remembering those who have died in the past year. In addition to praying for their departed loved ones, family and friends of the deceased commemorate them in great processions, which wind their way through the streets of the ancient Newar towns of Bhaktapur, Patan, Kathmandu, Pokhara, Bharatpur, Bandipur, Gorkha, Dhulikhel, etc.

Despite its associations with the dead, the festival procession is not a dour or solemn event. In fact, there is a great deal of merry-making connected with it. Many of the participants wear outlandish costumes. Traditionally, a good number of the young Newar men in the procession dress in women’s clothing. Over the centuries, the Gai Jatra Festival developed a second purpose. In the days when political expression of any kind was outlawed, Gai Jatra was the day when ordinary citizens could vent their frustrations through political and social satire, without fear of reprisal from the rulers.

Given this history, Gai Jatra seemed to be a ready-made occasion for the Blue Diamond Society, the Nepali sexual and gender minority association, to stage Nepal’s Pride march. Blue Diamond Society will organize a candle lit memorial in memory of those LGBTI who have died, and will also hold a candle lit memorial in honor of the victims of the Seti River flood, triggered by a, what is believed to be, global warming induced avalanche on Machhapuchre mountain last month.