Kolkata’s 12th Rainbow Pride Walk To Be Held On July 7, Inspires Walks In Smaller Towns Too 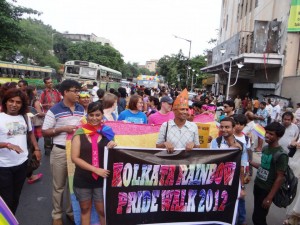 The 12th annual Kolkata Rainbow Pride Walk 2013 will be held on Sunday, 7th July 2013 at 3:00 pm. The walk will commence from Hazra crossing in South Kolkata and culminate at the Academy of Fine Arts with short speeches and cultural performances.

“The pride walk is an open forum and anyone is welcome,” said Souvik of the Kolkata Rainbow Pride Festival, a non-profit collective of individuals and organizations who have come together to organize the walk since 2011.

“We will raise our voice against gender based violence,” he said. The Pride Walk will be a platform against the various forms of violence through which the patriarchal, homophobic and transphobic society stifles both women and other people who challenge social norms of gender and sexuality.

Kolkata, which hosted South Asia’s first pride walk in 1999, has emerged as a hub for queer activism over the years, embracing people who challenge normative structures of gender and sexuality, particularly transgender, kothi, hijra, lesbian, gay and bisexual people. The Pride Walks too have grown in strength from the handful of people in 1999 to more than a thousand last year.

In recent years, the walk has inspired rallies not just in big metropolises but in smaller cities like Bhubaneshwar and Patna. This year smaller towns in Bengal like Chandannagar and Islampur have also held their own pride walks, proving that LGBT issues have far greater reach than metropolises and the upper middle class sections of society. The walk will also commemorate the landmark Stonewall riots in New York where the LGBT community fought police violence, harassment and extortion. In anticipation of the much-awaited verdict of the Supreme Court relating to the decriminalization of homosexuality in India, this year’s Kolkata Rainbow Pride Walk will renew the demands for decriminalization, equal rights, and the freedom from persecution or harassment on the basis of gender and sexuality.

The run up to the event has seen a fund-raising party on the 22nd of June and a workshop at the American Center on the 28th. “There are no separate logos. Everyone will walk under the Kolkata Rainbow Pride Walk logo. The only demand we have of the people is to give everyone their due respect,” Souvik said.