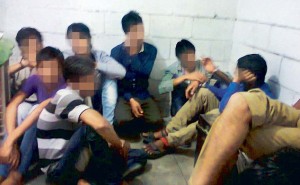 In a story that appeared on the Daily Mail on 10th July, the UK based newspaper has alleged that Delhi Police personnel are torturing and sexually abusing juveniles and illegally detaining them as well. In a report titled “Exposed: Secret prisons where Delhi Police ‘torture and sodomise child detainees with full knowledge of senior officers’” the paper writes that Delhi Police runs “make-shift jails” in an unoccupied four-storey building in Vijay Vihar, with full knowledge of senior officers.

A photograph, leaked to a correspondent of the Daily Mail by a policeman working in the building where children are illegally detained and abused, shows young boys hauled up in a small room. “According to the policeman, who works in the same building, lower-ranking police use the space for everything from keeping the accused illeg 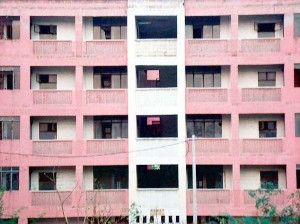 The four-storey building in Vijay Vihar in Delhi where juveniles are illegally detained and tortured. (Pic Source: Daily Mail)

ally to torturing them,” the paper writes. “There are many such children and adults illegally confined in this building. Those who have been inside say children are being tortured and sodomised in this place, which is being used as an “illegal lock-up” by local policemen,” it further reports.

The building where the juveniles are kept is an empty building taken up by police. One of the detained boys is quoted as saying, “Me and my six other friends are locked up inside a room. Policemen tie our hands and legs with a chain and allow us to move only for using the toilet and eating food.” Another one says that a policeman snatched his mobile phone and Rs 3200 when he was brought to that place. While one juvenile had been sentenced to a remand home by the court, another one had been granted bail!

Deputy Commissioner of Police (Outer) Sanjay Kumar, however, feigned ignorance about any such activity being carried out by the policemen. “Legal action will be taken against the policemen if I get any such complaint,” he told the Daily Mail.

In the meantime, a three-member probe committee of the Delhi Commission for Protection of Child Rights (DCPCR) has began an inquiry and six policemen already and six policemen, including a station house officer, were suspended on Tuesday pending further investigations for allegedly keeping seven boys in custody for three days in connection to two theft cases. The DCPCR has asked the police commissioner to submit an action taken report by July 17th.