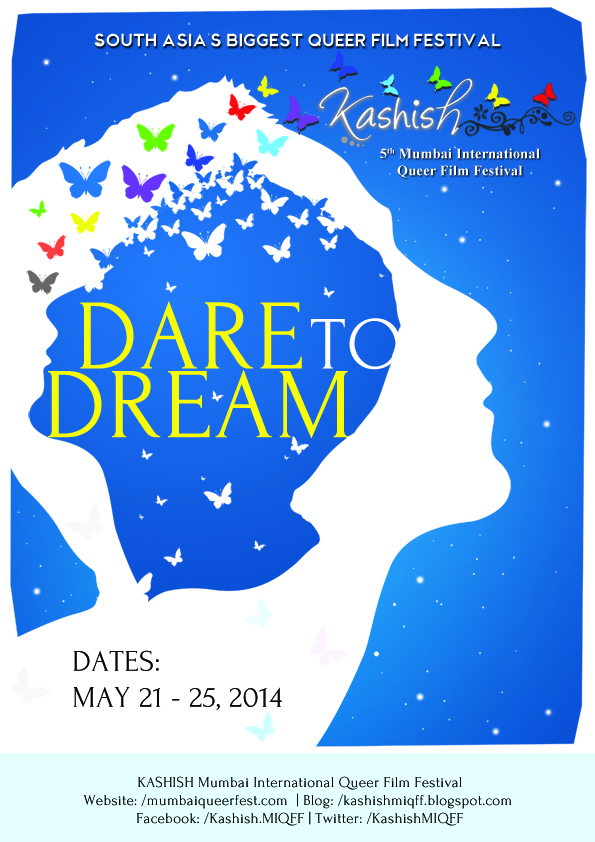 India’s top fashion designer Wendell Rodricks has picked the poster submitted by Hyderabad-based graphic designer Punith Mahesh as the winning design of the KASHISH International Poster Competition. The poster design contest was truly international this year, with entries from across India – Mumbai, Hyderabad to Chandigarh, Goa and Shillong; and even outside India from several countries such as Malaysia, Indonesia and Estonia.

The poster will be the look of the fifth edition of KASHISH Mumbai International Queer Film Festival, scheduled to be held from May 21-May 25, 2014. The competition asked designers to creatively interpret this year’s festival theme ‘Dare To Dream’.

Wendell Rodricks said of the winning design, “The stark graphics and the concept of exploring the mind makes this poster a winner. At a time when we need a change of mindset over Section 377 and new concepts of expression in queer cinema, this poster makes for a refreshing think tank. The overall impact of the poster is unforgettable and easily identifiable. Congratulations to the winner.” Wendell Rodricks has instituted a cash prize of Rs 20,000 for the winner of the contest.

Punith Mahesh said he was ‘shocked’ and ‘overwhelmed’ when he heard that he had been chosen the winner.  “It feels great to win a prestigious national level award. This award will be a great boost to my future and hope there are many more to come. I profoundly thank KASHISH and Wendell Rodricks for choosing my art as the winner,” said Punith, who claims he lives by the quote “I dream my design, and then I design my dream”. Punith says he perceives designs from scribbles and describes his style as “sort of modern, free hand and sketching.”

Explaining his design Punith said that the butterflies represent the flight of human ideas, imagination and innovation, while the stars depict the infinite world out there for the ideas to soar.

“Exploring the theme Dare To Dream in several unique ways, the diversity of designs were astounding. Coming from students, to professional designers, to young people from the LGBT community, it reflected every artist’s interpretation of what it means to dream,” says Rangayan, “We are really happy with the simple enigmatic design that Wendell Rodricks has chosen and it almost mirrors what is going on in our minds as we prepare for KASHISH 2014 to be held in May.”

KASHISH 2014, South Asia’s and India’s biggest and only mainstream queer film festival, will be held between May 21-25, 2014 in Mumbai at a multiplex and at Alliance Française de Bombay. KASHISH Mumbai International Queer Film Festival is the first and only gay & lesbian film festival in India to be held in a mainstream theatre and the only queer festival to receive clearance from the Ministry of Information and Broadcasting.