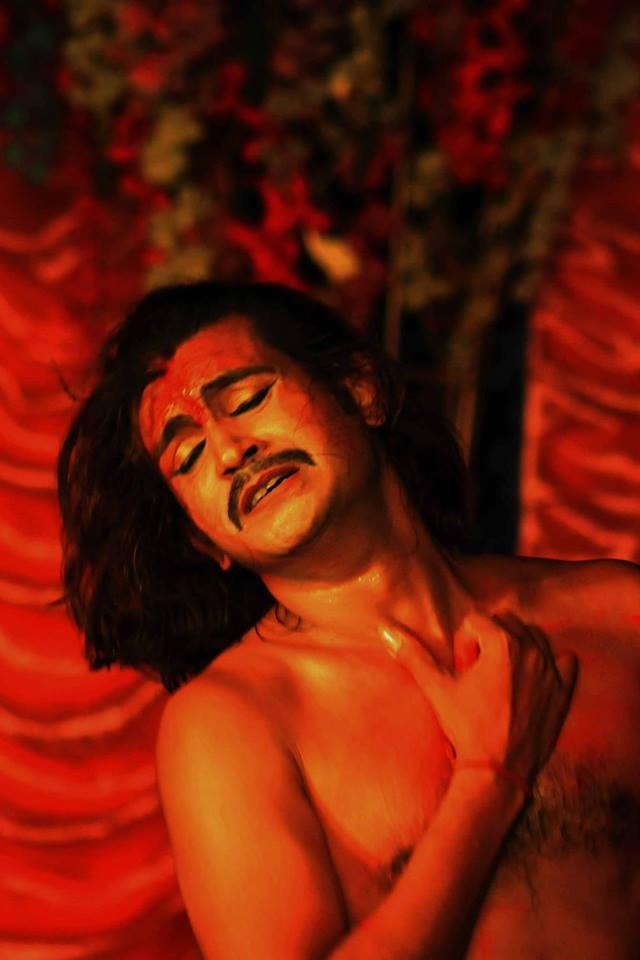 You can read Part 1 of this story here

Agni boarded the bus to his college for the play rehearsal under an evening sky that looked dark and sulky, unable to decide whether to continue the hot spell or gratify Mumbai with a cool shower. Last week had been hot and stuffy, without a drop of rain, which was rather unusual in the month of September. But today the sky had turned progressively black and angry, ready to take revenge, to make up for the unexpected dry interlude. Agni picked up the distinct smell of rain in the air, as he walked from the bus stop to St. Xavier’s college. Right before he could reach the rehearsal hall, big fat drops of rain pelted down on him like ruthless, piercing bullets. A quick glance at his reflection in the big hall mirror revealed how soaked he was in such less time. He always carried a raincoat in his backpack, but had forgotten all about it today. Playing Draupadi had made him unusually nervy, pushing out all other thoughts from his mind.

Gautam let out a low whistle as he came near to get a better look at him. “Here comes Draupadi, rain-drenched sexy Draupadi…” Gautam had a sharp tongue and an opinion about everything in the World but he cared for Agni a lot.

Agni shoved him aside playfully, looking for something to wipe his hair with. “Shut it, you moron! And why are you here so early?”

Gautam handed him a tiny towel. He always carried a paraphernalia of useful items in his huge rucksack. “Wipe down your hair quickly and then I will show you how well prepared I am for the role of Duryadhan. I have been practicing on my own for a while. The antagonist has to match up to the protagonist in every way, right?” he said squinting his eyes at the script in his hands. His chunky face looked podgier and his double chin protruded when he focused on the script. It seemed different from what Agni had been carrying around in his hands for the last few days.

Agni stopped in his track as he stared at the script. “What? Are you using a different script?”

“No, this is the latest script. The director emailed it last night. You should check your email more often,” yelled back Gautam.

“How can he make a last-minute change? Now that is wonderful. I spent the entire morning learning the dialogues from a script that is not even current.” Agni shook his head in frustration.

Gautam looked at him, his deep-set eyes suddenly tender with concern. “That’s okay. It’s not that different, especially your parts.”

He continued looking at him, his gentle gaze turning more intense. “You know what…you will look nice as Draupadi. You are quite pretty,” he said.

Agni let out a lazy smile. “I am handsome, you mean.” He looked at his naked torso, smiling at his shapely, fair skinned self.

“You…you are beautiful,” said Gautam and stood behind him a bit too close. There was a look of longing in his face, for something he was unable to define or express. “You are so beautiful,” he repeated as if words were too limited to articulate what he wanted to say.

“What…what are you doing?” said Agni noticing Gautam’s frozen expression, turning towards him.

“I am trying to tell you something but…failing miserably,” said Gautam lowering his eyes and a moment later he wrapped his fleshy arms around him. Before he could react, Gautam planted a sloppy awkward kiss on Agni’s lips, making him almost leap in surprise.

Agni was astounded about what had just happened and could not trust himself to speak for a long moment and then there was a sudden rustling noise behind them. Standing in the shadows near the door was Mrinalini, her mouth hanging open in surprise. She had not realized how audible her bag slipping from her shoulders had been. Agni put his wet shirt on hurriedly and strode towards her, but she stood motionless as if she had grown roots into the spot below her feet. Agni’s heart started galloping as he noticed the shock on her face change into a slight shade of disappointment as her mouth tightened into a grim line. Her gaze danced around restlessly over his face unable to focus when the rest of the production team arrived, complaining loudly about the sudden spell of rain.

The rehearsals started promptly after but Agni could not concentrate on his part. He felt so mad at Gautam and pretty upset with himself as well. He should have explained to Mrinalini immediately that it was not what it might have looked like, but somehow the moment flew out of his hands and she did not wait a single moment after the rehearsals wrapped. Before Agni could collect his thoughts and turn to her, she was gone.

Mrinalini avoided Agni after that. Whenever he tried catching her on campus, she seemed to be in a tearing hurry. She walked away from him as fast as she could with her long shapely legs, her naturally sparkly eyes, sheathed in reserved coldness each time they took in his form. It broke his heart to see her react like this. If only she would give him a chance to explain.

His frustration with not being able to resolve the stalemate with Mrinalini made him lash out at Gautam more severely than he had intended, but as he confronted his best friend, Gautam looked so low, as if he had been meted out a terrible retribution for a crime he had not intentionally committed. Gautam was not delusional, nor was he unintelligent so, how could he have misunderstood? Gautam admitted having special feelings for him and had thought for the longest time that Agni felt the same way about him.

“I thought you loved me…I love you so much. Didn’t you know about that already?”

Agni did not. He didn’t have the slightest idea that his best friend was romantically in love with him.

“But why would you think like that, Gautam? What have I done to give you that idea?” He felt annoyed with what Gautam had deduced about him.

“I…I had assumed that it was obvious, given the fact that your parents…” He had deliberately not completed his statement and coughed uncomfortably instead.

Agni felt a wave of fury ride through his insides. “My parents…what? Finish what you started saying!”

Mohini heard the commotion and came rushing to Agni’s room.

“What is going on here?” she said looking at the two boys with concerned eyes.

“Gautam assumed that I am gay because of you and Dad. He…he ruined everything. He…he behaved like an idiot and made sure that Mrinalini never takes me seriously again…” Agni looked down at his feet, filled with a sense of defeat.

Gautam looked wretched as well, his eyes filling with tears. “I am so sorry,” he said in a choking voice and fled as fast as his legs could carry him.

That night, Mohini watched Agni fiddle with his food pretending to eat instead of really eating. His healthy appetite had disappeared, making him pick at his food uncharacteristically. She had called Gautam and learned what had happened on the rehearsal night to make Agni so upset. She wanted to help, but Agni was rather tight-lipped about it for he knew what she would say. Agni did not like her bringing up the fact that their family was special and that it affected his life unintentionally at times.

“We are a family like any other!” he had emphasized firmly every time Mohini started on those lines, and she knew that he believed in it with all his heart, but she felt responsible for his unhappiness none the less. Mohini took in her son’s unhappy face and pledged silently to fix the situation, with or without Agni’s help.