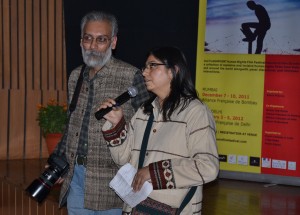 Filmmakers Nandan Saxena and Kavita Bahl, of 'Cotton for My Shroud' at Flashpoint film festival 2

“This is the time in History when advocacy of Human Rights is most needed as personal rights are in danger of erosion the world over with the rise in conservatism and fundamentalism,” Max Claudet,  Counsellor for Culture and Cooperation, French Embassy of India,  said in New Delhi while inaugurating Flashpoint – the 2nd Human Rights Film Festival on 3rd Feb. He said showcasing human values and basic rights was an important initiative and the European Union Countries and particularly France fully supported Human rights.

Feroze Gujral – former super model and eminent media personality said being a conservative society which is fast liberalizing, people in India go through a myriad of emotions in their day to day life while negotiating these contradictions. “It is important to make everyone aware of their rights through displays like the Flashpoint Film Festival,” she said. Ms Gujral is also Director of Philanthropic Art Foundation and works for many social causes.  She also released DVDs of Project Bolo – a collection of stories of Lesbian Gay Bisexual and Transgender persons of India. Project Bolo documents individual profiles and reconstructs the unique history and progress of the Indian LGBT community from the early 70s. It is produced by Humsafar Trust, Mumbai.

The three day festival screened 16 films that took a critical and empathetic look at several human rights issues – from religious fundamentalism, communal violence, political authoritarianism, war crimes, homophobia, surrogacy, migrant rehabilitation, women empowerment, corruption and poverty. The films highlighted  human rights violations in, as diverse countries as, Kenya, Senegal, Columbia, Israel, Iraq, Kurdistan, Thailand, Indonesia, Sri Lanka, Cameroon, USA and India. “It is interesting to see how Human Rights are perceived in different parts of the world. What may be more acceptable as a basic human right in one country may be looked upon with anxiety in another. An example of this is surrogacy, which is finding acceptance in India but not so in many western countries,” said Sridhar Rangayan, Festival Director of Flashpoint.

On the concluding day of the festival, a panel discussion titled “Roots of  War: Gender and sexual exploitation”  was also held, with noted LGBT activists and feminists on the panel. The panelists called for creation of a joint space for fighting discrimination against both LGBTs and women.