Hadi: What was the inspiration behind writing this novel?

Dr. Roy: To be open and closed about my world, sufferings and pains, abuses and discrimination, acceptance and denial by family and relatives, friends and foes that I personally felt in life, was the main inspiration for writing the novel. The lives of a few of my close friends were also an inspiration behind it.

Hadi: “Travails of Entrapment” has a huge palette of human emotions on display, it’s more like an epic tale, how do you feel about it? Was it deliberate?

Dr. Roy: Thanks for terming it an ‘epic tale’, I would say that’s the best compliment ever that I have received from anyone. I don’t know how much emotional portrayal and justification of it I could do, but yes, it’s definitely deliberate. Believe it or not, most of the gays in this country undergo severe psychological turmoil at every phase of life, still they ruthlessly survive in the heteronormative society of India, with just one thought in mind, ‘One day will come when I will be liberated’. This hope leads them to struggle through all odds. Keeping that in mind, I fictionalized as much as I could. To be frank enough, most of it is the crude reality of being gay in this country.

Hadi: Rohan De was brought up in a small city and then moved to Delhi, is it in some way autobiographical?

Dr. Roy: (Laughs) Most of you have asked me this question. I mustn’t at all deny that. Yes it’s partly autobiographical, I also did move from a small town to this big metropolitan. But the main reason behind it is that we gays tend to think if we live far away from our family, we can live the way we want to. This escapist mindset, is the main motive in portraying the story that way. Moreover coming back to my family, my parents accepted me when I was a teenager. So it’s not totally autobiographical you see.

Hadi: At times, writers do develop an attachment with the characters they are infusing life into. So tell 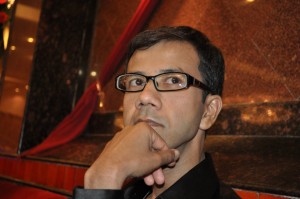 us who is your favourite character and why?

Dr. Roy: That’s a tough question! It would be sheer injustice if I support one and leave the others. They are all dear to my heart from Rohan to Vaibhav, from Paras to Kunal, from Monisha to Ruchika, from Gonika to Meena, everyone is a part of the same family. But yes within the domain of the family, we all human beings tend to love one a bit more than the other, in this case, as I’m the creator of all these characters, I prefer not to choose out one. Many of my readers did like one character to the other; they find lots of similarities between their life and the character they adore. Tell me, how can I create an imbalance between them and prefer one? Won’t my readers feel hurt?

Hadi: When you have been passionately writing a story for so long, it tends to become a part of yourself. How did you deal with these feelings when you had finished Travails of Entrapment?

Dr. Roy: Yes, I do feel passionate about each character, sometimes I cry like Rohan, sometimes I feel jealous like Nikhil, sometimes I feel excited like Paras, or even sometimes I crave the pangs of separation like Meena. Being my debut novel, this book is very close to my heart. My readers sometimes call me and say, ‘Please read these lines from so-so page.’ I do follow like an obedient person and read those mentioned lines, and you know what? I feel exactly that emotion which is undermining in them. That’s how I deal with the characters now.

Hadi: Do you think that Travails of Entrapment has been able to break stereotypes or is it strengthening them?

Dr. Roy: I’m not a rebel, so I’m not here to revolutionize anything. Yes, definitely I wanted to break some stereo-types, at the same time, I did create some stereotypes. For example, breaking the stereotypical thought that your parents won’t be able to accept you or deny you, if you disclose your sexual identity. I have both the characters- Paras who was accepted, while Rohan who was denied. On one hand, Nikhil changes his emotional bondage with Rohan, while on the other Vaibhav accepts him more sentimentally; now how does one compartmentalize these stereotypicality? It’s all on my readers to think about, it would be very selfish if I do so, isn’t it?

Hadi: What are your thoughts about Queer fiction and writings in India? How do you think Travails of Entrapment is different or similar to them?

Dr. Roy: Queer fiction or writing is a relatively new genre post-independence in this country. The pioneers Hoshang Merchant and R. Raj Rao are those writers whom you can consider bringing the global focus on Indian queer writings, later many writers joined their group. I always have considered it to be marginal writings in Indian Literature in English, same as Dalit writings. How many of them are widely read?

We as readers in this country are more fascinated by Hollinghurst or Easherwood than our Rao or Merchant – there is a saying that the white monolith and the West attracts us, and it’s even true when Literature is considered. You have to win a global prize to be a good writer, that is why many of us know Vikram Seth’s writings so well, in comparison to Rao or Merchant.

They all talk about the reality of life, many new writers do focus on the same thought, and somehow I also follow the same path. But as you said, this is an epic tale, so it stands apart, doesn’t it make all the difference?

Hadi: Don’t you feel you will be labeled as a ‘gay writer’ or a writer writing ‘gay literature’? What are your thoughts about it?

Dr. Roy: What’s the harm in being labeled? Don’t we tend to label writers as Bengali or Marathi, instead considering them as just writers! Take the example of bestsellers, Grisham or Asimov, are also tagged as writers with particular genre. Genre-based writings are exactly what each writer does, I also followed that. Until and unless we writers take a strong voice and retaliate against everything through our writings, we cannot avoid being categorized into generic groups.

Hadi: Do you consider Travails of Entrapment as a real portrayal of Indian society and culture?

Dr. Roy: Yes, I do consider that it’s a portrayal of typical Indian society. Otherwise, why such discrimination– Rohan undergoes sodomy but keeps silent, Vaibhav undergoes expulsion, still he cannot voice his real feelings. But there are some extreme points where Meena accepts Paras as Rohan’s life partner, same with Paras’ family.

Here I drew such fictional portrayals which might seem as unrealistic, but just think once, aren’t the rural or pahadi people (as in the novel) more tolerant when sexuality is considered? They see the love and purity of the bondage. So I think it’s portrayal of real India.

Hadi: What was the most important message you want your readers to come across through Travails of Entrapment?

Dr. Roy: Two important messages I wanted to give. The first and foremost is no gay person should lose hope in life, because that will ultimately lead you to be liberated. And the second one is respect the purity of relationship whether heterosexual or homosexual. The bondage matters more than anything.

Hadi: How are you feeling about the response you have received from your readers?

Dr. Roy: One word- ELATED. I feel a divine bliss when my readers become so frank in their responses personally sent to me through emails. Recently when I went to the airport to book my ticket, the counter boy, as he filled up my name and email, stared at me, and within few seconds came out and asked for an autograph on my book. Believe me, nothing better can happen than this. I’m not a celebrity writer but such reactions from my readers touch my heart.