To enter the theater and watch a cinema from a culture one has no idea about is a revealing experience. Yesterday I went to watch a Peruvian production called Retablo. Directed by Alvaro Delgado Aparicio, it is a story of a closeted folk-artist Noe, who makes devotional miniature arts, and his artist-in-training son, Segundo. It is a coming of age story with almost predictable plotline, but is also a lesson in toxic-masculinity and hatred.

From the beginning of the movie we see that the father and son have a very comfortable and loving relationship and despite monetary issues, the mother is content too. They go to city to deliver the finished products;
they happily devour the same fruit while talking about supplies in the city. When they return home they share the same washing cloth. At workshop Noe is a Maestro, who sweetly caresses his son’s hand when the fourteen year old boy is in a rush to master the art of Retablo. That for an artist his hands are everything gets established in one scene as they prepare artefacts for one affluent family. Later, after the feast in at the clients resident, Segundo cuddles to sleep with his drunk father – a beautiful and innocent
relationship is portrayed through their everyday lives. 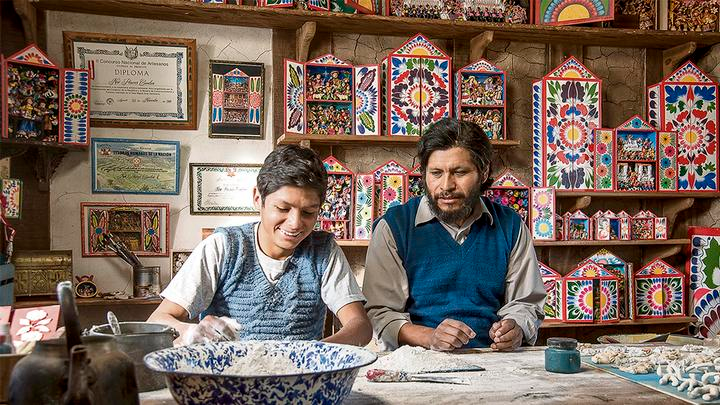 The innocence is broken on their way to the Church, when Segundo peeps through the backseat of the truck they took lift from. He looks into the familiar hand engaged in vigorous stimulation of the truck driver’s phallus. In other words, Noe is giving a handjob to the driver. From that moment we see this boy suffer internally as he can’t pinpoint and explain his emotions. He stays aloof from his father; when he hears his parents engage in sex, he looks betrayed. He stops going to the workshop, loses his appetite, becomes rude to his mother. From a literal poor but content boy, he becomes a poor and miserable boy.

The more Noe tries to ask him, the more distant the boy grows, to the point of a physical confrontation where, Noe is helpless and clueless about what he did.

Here is where I loved the cinematography, while at sports Segundo is wearing a sweater, while boys of his age and his best friend Mardonio are bare chested, bloated with testosterone and dream of having sex with beautiful voluptuous women. Incapable of understanding his father’s sexuality, feeling guilty to stare at his friends; his own naïve crush on local lady breaks on his face. In this toxic environment to be a man who takes the woman he desire; ‘motherfucker’, ‘wet pussy’, ‘big tits’ and ‘big arse’ are
common terminology to these young boys. In their imagination of ‘having sex’ we see the ingrained violence born of religious intolerance towards the ‘Other’ and ignorance. So while a drunk Mardonio mocking Segundo about his crush on Felicita- the vegetable seller- and telling how he would ‘Fuck and Satisfy her’ if Segundo fails, is horrifying, the next scene is what scares the audience most. A drunk humiliated fourteen year old enters Felicita’s home and removes her quilt with every intention to rape her, but doesn’t as he breaks down, crying later and wandering to home. 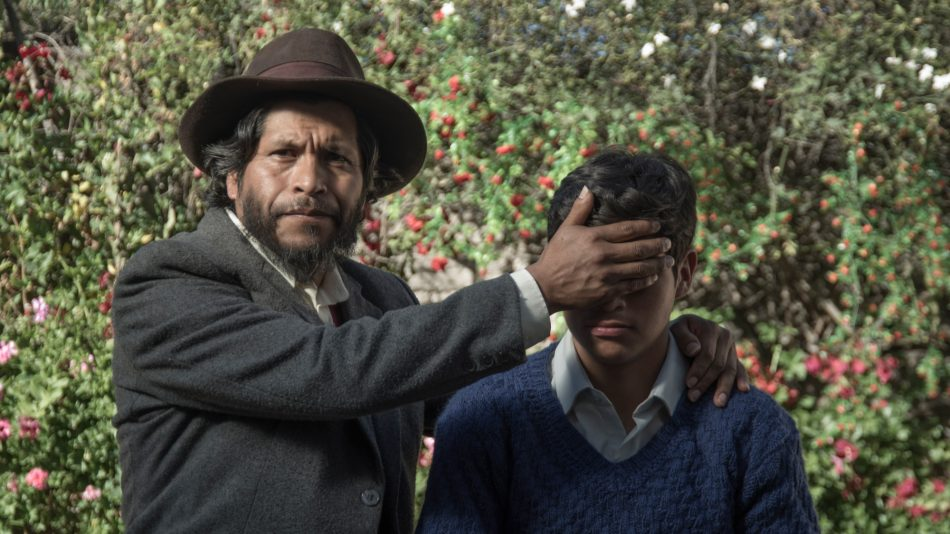 Meanwhile Noe has been caught by the village people who flog him, and drop him home, which end up revealing his orientation to his wife. I loved the outrage the wife had.

Often in coming out stories and films we forget that the closeted person not only harms themselves but the people they get involved with to protect themselves. Anatolia’s outbreak is the cry of every betrayed woman. She breaks down the entire workshop with her walking stick and cries.

Segundo, does what is very common to the narrative trope, he chooses to live with his injured father. While Anatolia leaves, she also puts the question ‘Doesn’t a mother’s suffering count in man’s world?’

We soon see another physical confrontation between Segundo and his peers, who tease and bully him for having a gay father. Eventually the narrative takes the most common climax ever to happen to LGBTQIA cinemas.

But against the vibrant culture, music, food and lush green locations of Peru, one thing proves universal – hate. Hate is a common practice, it doesn’t need cultural rooting or history, it just needs ignorant and intolerant people who are threatened by that minority of different individuals. Navigating this hate in one’s self and community becomes the task for Segundo. We find him flogging himself because he is tool-less in this world of binaries, from objectifying women as sexual commodity to hating his father for being gay, to finally consoling his mother’s breaking heart to appreciating the uniqueness of his father beyond his sexuality, the boy grows up against his will and hopefully into a sensible adult.