It is a Cosmic Dance, Not Cross-Dressing! Understanding the Culture and Festivals of Nepal

I grew up in a remote village of Gorkha district, north west from Kathmandu, in Nepal. Fortunately or unfortunately, from where the famous term, the Gurkhas (as brave warriors), originated, after they fought WWI and WWII along with the British Empire. As I have no interest in wars or weaponry, I will talk about the cultures I have been exposed to since my childhood. Every year I used to get amused and enjoyed myself during the festivals, whether it is Lakhe Dance or Ropain Jatra or Gai-Jatra or Indra-Jatra, watching the few young men prepare themselves, which the ‘West’ calls ‘such thing’ a cross-dressing, and these days the rest of the world have so easily adapted this term “cross-dressing” without thinking much of the implication. But for us it is never cross-dressing, rather, it is a symbol and process of transformation. The young men take hours to put make-up, wear colorful dresses, long hair, bangles, outlandish traditional jewelries, some also wear mask and most importantly they practice the effeminate body languages and gestures. Both, the performers and onlookers, play with light mischief, pranks, humors and jokes. It is all fun and remarkable.

I know it is difficult for me to explain, why this is such, to the world; and even more difficult for the world to understand, a world which today is obsessed with Macho-culture and Gym-going-“masculine-body” image. Some may even ridicule such cultures of Himalayan Mountains and Hills. But it is, in fact, a philosophical and spiritual journey, which, according to Hinduism/ Buddhism, everyone must complete, if not in this life, then in one of your many lives yet to come. 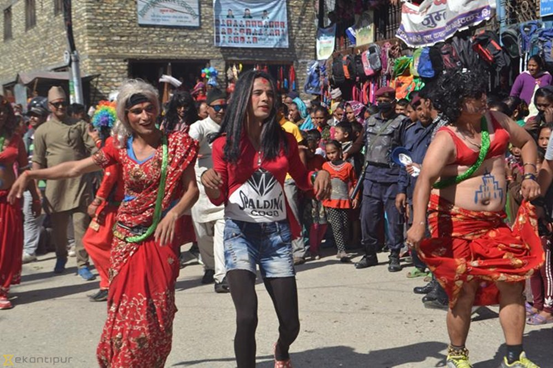 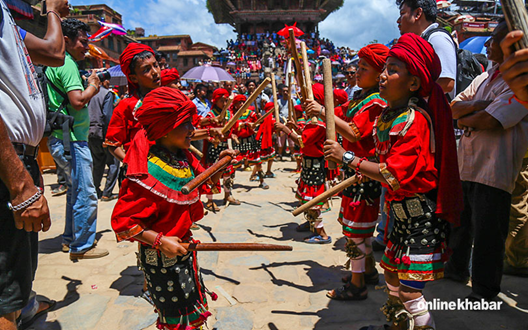 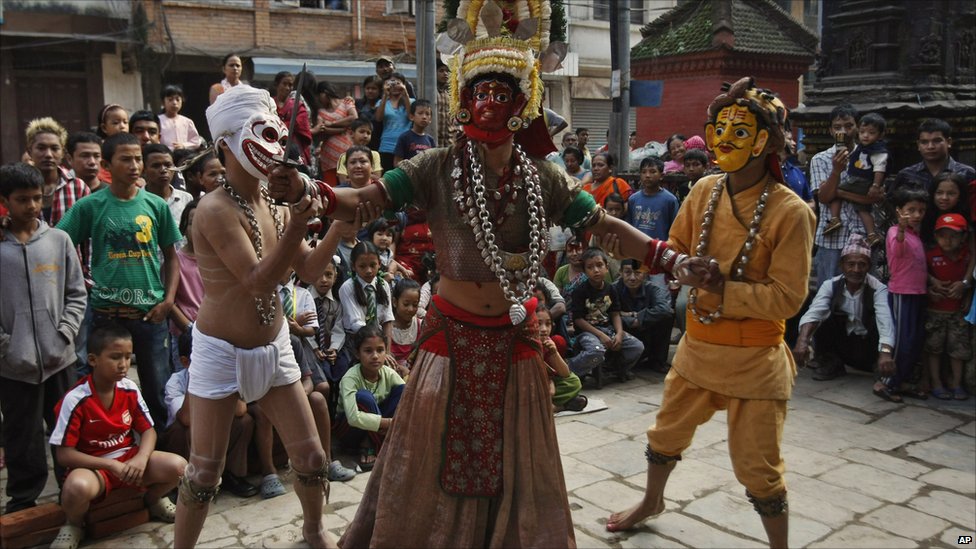 Most of these Jatras (Yatra in Sanskrit, means Journey), in the Hills and Mountains of Nepal, India, Bhutan and Tibet, are performed by young boys/men in a feminine attire, are not just about the outfit but an inner transformation too. As the Jatra/Yatra, as a pilgrimage, is supposed to take you to your desired destination (for both the Hinduism and Buddhism, the ultimate destination is Mokshya or Nirbana, the ultimate Liberation), without inner transformation the journey is impossible, is incomplete. Hence many young boys/men often try their best to get a chance to perform, and not everyone is fortunate enough to get a chance even once in a life time.

The transformation is about liberating yourself physically, intellectually and emotionally by transforming your presentation, identity and feelings of who you think you otherwise are. This is such a profound philosophy, handed down by the ancestors through our unique cultures and festivals. Today, when the ‘pop-cultures’ look up to the ‘Western-Masculinity’, such traditions of Feminization of your presentation, identity and feelings of ‘who you are’ are looked down upon. Even women empowerment is equalized to ‘acting, performing and becoming’ masculine; thus so-called powerful women try hard to look masculine (look at some of the women leaders in powers today, short hair, almost masculine attire and attitude, no make-up).

All these feminized festivals are, in a way, teaching us the value of beauty, fluidity, gentleness, flexibility, diversity, and compassion. That’s why, this is not ‘cross-dressing’ and this is not ‘cross-gender-ing’ either (Anyway, Nepal always believed, accepted and since 2007 legally recognizes three genders).

This is a culture of transformation, helping you free from your own mental and physical caging of Machismo, Rigidity, Standardization, Brutality, Hatred, Beauty-phobia and Glamour-phobia.

The picture 2 above of Ropain-Jatra, the rice planting festival, reminds us of the importance of agriculture, food, fest and materialism, not just to survive but to enjoy life. The festival is also a feed to your intellect and emotions with the transformed presentation of the performers and music, songs and dance (The visual quality is not that great but enjoy the 3:32 minutes long Ropain Jatra from Gorkha District).

The picture 5 above is of the Indra-Jatra festival, an annual festival, which is marked by masked dances of deities and demons. Even Indra, the king of the heaven, has to go through this transformation once a year. Similarly, the picture 1 is of Lakhe dance, where the Lakhe(with long unbound hair, vivid frightening mask and all the colorful dress) represents prakriti (the wild-nature) and the little boy, Jhyalincha, represents the mind. The whole performance depicts the elusive yet constantly unsteady mind, teasing and provoking the wild nature and disparaging into the universe of consciousness, while the wild-nature trying to catch-hold of the consciousness to create life-force. With the thumping sound of the Universe, it is a cosmic dance of creation. The Lakhe dance festival usually ends with killings of the Lakhe, depicting that, sooner or later, every creation has to end, every life has to die, so that new life can begin…(This video may appear a bit violent but you can still enjoy a 5:45 minutes long Lakhe Jatra from Matthilo Dungeshwor Bazar, Dailekh distrcit).

As femininity is the source of material creation and the Atman (the consciousness) needs the wild-nature to become Jiva-Atma(the life-force), these festivals are also about respecting and celebrating the wild-nature, materialism, feminism and motherhood.

Think how peaceful, prosperous and fun the world would become if, even for a single day every year, the world leaders transform themselves into feminine, not just with their outfit, but intellectually and emotionally as well. They should come and join one of the Jatras in Nepal in order to transform themselves for larger good.

Thank you and Namaste!