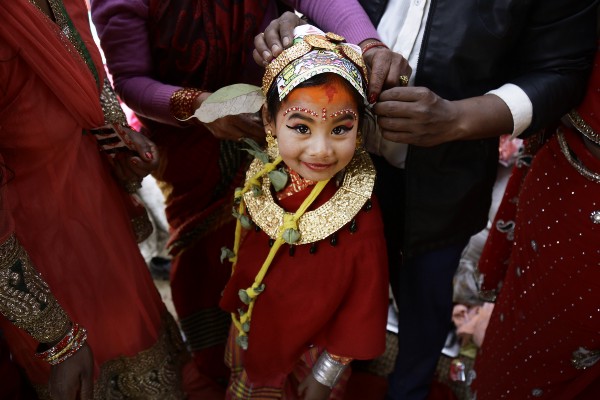 “Newars,” are inhabitants of Kathmandu Valley, the capital of Nepal, and major traditional trading route settlements across the country. They are believed to have migrated to the hills from the plains of Terai-plain (of Nepal and India) much after Buddha’s time. Many last-names that Newari people carry today, likeshakya, malla, shrestha, kapali, nakarmi, joshietc, have been mentioned in Tipitakas and other Hindu, Buddhist and Jain religious books. The castes and sub-castes have been divided hierarchically among Newars according to their profession from a traditional point of view. They have a unique way of performing rituals, arranging feasts, festivals, and functions which provide the nation with diverse cultural features.

“Ihi,” a marriage with a bel fruit, is considered to be the first marriage of a Newari girl. 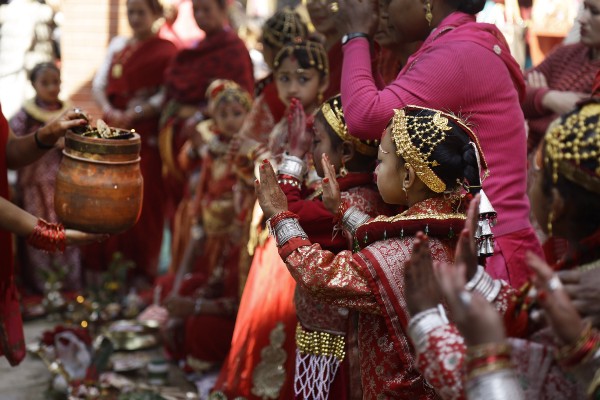 The bel fruit marriage is done when the girl is seven to nine years old, or before she attains puberty. They also have the belief that the future husband of a girl would look similar to the bel fruit. If the fruit is bigger in size, the groom will be fat and if it’s small then the groom will be tall and good looking. Traditionally, they believe that the married bell fruit should be kept in a safe place and after this marriage, a girl is not allowed to eat the fruit for the rest of her life.

After ‘Ihi’, newari girls have to perform the ritual called ‘Bhara’.Which is marriage with the SUN. It is a traditional ritual for a Newari girl to marry the Sun. It is believed that the girl is protected by the Sun from bad people and evil after this occasion.This traditional ritual is only for the girls of age between 12–14 years who are kept in a dark room for twelve days . During these days, “Bahra Khayak” (ghost) is made from cotton and worshiped. Girl’s aunt, maternal uncle, father, mother, and grandmother are the most important people who have their own particular roles for completing this ritual. After twelve days, the aunt brings the girl (who is blind folded) out of the house; maternal uncle puts the oil on girls hair; father and mother gives “sagun (gifts that brings good luck)” which is an egg and curd, and the grandmother ties the girl and the Sun as a husband and wife. It is prohibited for the girl to come out of the room and she is not allowed to see males of the house.

Now, after marrying a bel-fruit (the feminine-nature) and the sun-god (the masculine- energy), the girl can marry a man. This unique tradition of marriage is, probably, telling us “we mustmarrythe Nature and the Mind if we wish to be prosperous and fortunate, secure and protected and, most importantly, to be happy”.