No! Love, Simon Hasn’t Been Banned in India!! Here’s How this Fake News Started Circulating

Talking to Deccan Chronicle, CBFC chief Prasoon Joshi said, “CBFC certificate has been given to Love, Simon four months ago, on February 6, 2018.” Another website Sabrang India talked to representatives from 20th Century Fox, the producers of the movie, who said that the studio did not have any plans of releasing the movie in India. “I don’t know where you heard this from. We are not releasing the movie in India. If you’re saying that tickets were being booked on BookMyShow, I don’t know where you got that information because we didn’t declare a release date. That’s the only information I can give you.”

Tracking Down the Fake News

Interestingly, none of the mainstream media in India had carried any news regarding the Censor Board denying the certificate to Love, Simon. Then how did this fake news start circulating over the internet? We tried to reconstruct the events.

On 6th June, Feminism in India (FII), an intersectional feminist website, was the first one to report that Love Simon was not being released in India. However, the report did not say the movie had been banned in India. All that the report mentioned was that users could not book tickets for the movie online, and there was no update on when it will be released in India. The report was titled “Love, Simon Indefinitely Pushed Back For India Release”. The first tweet about it went out from FII’s handle at around 12:10 am on June 6th. 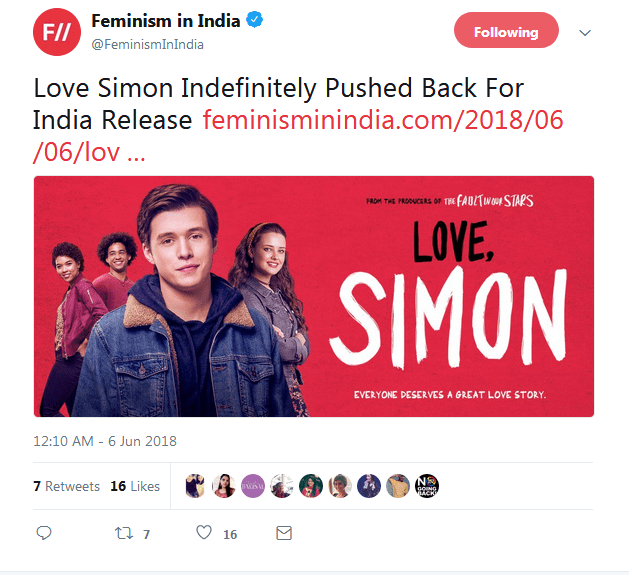 Later that day on June 6th, Gay Star News (GSN), a LGBT news portal based out of UK, probably picked up the story from FII and ran a report that Love Simon had been banned in India. The report was titled: India bans Love, Simon from cinemas on the day of its planned release. This particular report, written by Shannon Power, does not quote either the Censor Board of India, or the makers of the movie, but goes on to say that the movie had been banned in India. “…people reported that when they tried to book tickets to previously announced screening times, they were no longer available. It is understood the Central Board of Film Certification (CBFC) banned Love, Simon because of the film’s gay content,” the report said, without citing any actual source for this, or talking to any of the person’s concerned. A tweet from the handle of GSN went out at 10:37 am. 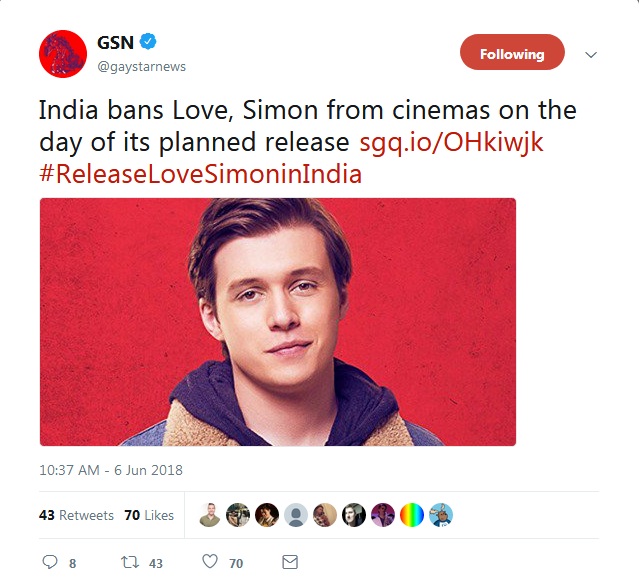 The GSN report was then picked up by other websites. Pink News, another UK based LGBT news portal, ran a report a few hours after the GSN report with the titled: “India pulls the plug on Love, Simon on day of its release” and referred to the GSN report to say that the Censor Board had banned the movie in India. GayTimes, again a UK based Gay Magazine, reported India has banned Love, Simon from being released and LGBTQ people are not happy at all, The GayTimes report does not quote/cite from GSN report, but this too says: “It is understood that this decision was taken based on the film’s gay content.”

By that time, other websites and portals, mostly foreign based, started picking up the report, and quoted Gay Star News in their reports, without any of them bothering to actually check with either the Indian Censor Board, or the producers of the movie.

We have reached out to Shannon Power of GSN to ask her the source of her news, but are yet to hear from her. We will update the post if and when we get a response from her or GSN.

Update: Shannon Power replied to our email and confirmed that they picked up the news from FII, and the part about banning of Love, Simon was more from their imagination/bias rather than actual facts. She wrote: “We were the second to report on it after I saw the news on an Indian website, it then seemed to be confirmed online that its release was delayed. But the CBFC never replied to my requests for comment.”