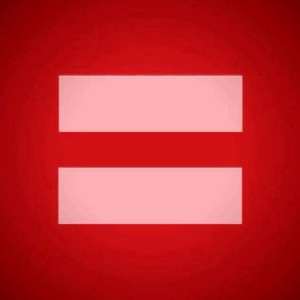 People who were in USA experienced something historic in March. The Supreme Court heard arguments in two cases which could decide whether same sex marriage is legal all over America. In those two days something unprecedented happened. I woke up that week and when I logged on Facebook I saw that almost all my friends had changed their profile picture to a red equal sign. My Facebook feed, my friends list and my posts were all a sea of red. Later I realized that Human Rights Campaign has posted that image on their Facebook page and asked supporters to change their profile picture to that red equal sign to show support to marriage equality. Little did anyone know that within 2 days that image would go viral and a majority of people, both gay and straight, had their profiles changed to that red equal sign.

It was a very small act, it was not going to influence the Supreme court’s decision on how they are going to rule. But what it did to people like me and thousands of other LGBT people was that it showed that the world has changed. It is becoming a better place for everyone to live. For a young man from India who had no idea what gay meant when I was growing up, confused and scared, this small act meant a lot. Today kids growing in various parts of the world grow up knowing acceptance and love. They are growing up realizing that people are fighting for some minority, about whom people felt shy even to talk about a few years ago. If I was a scared gay kid still in the closet and was feeling hopeless and one day just logged on into my Facebook profile and saw that red equal sign among all of my contacts, it would have meant that I don’t have to be afraid anymore. It would have meant that those people in my friend list were going to accept me for who I am and still love me.

The arguments in the Supreme Court against same sex marriage were absolutely ridiculous for anyone watching it. Justice Ruth Bader Ginsberg delivered a blow when she questioned the lawyer arguing against same sex marriage and asked, “How can you say that same sex couples are treated equal when they are being denied almost 1100 benefits which their straight counterparts have through marriage?” making gay marriage seem like skim milk marriage, an analogy which is going to stick for a while. When the opposition said that marriage is for procreation, Justice Elena Kagan made a remark asking that, “ … in this country, straight people over the age of 55 are allowed to get married. But I do not see any children coming out of their marriages. So how can you say that marriage is for procreation?” There was a moment even when Justice Anthony Kennedy the more conservative justice said, “There are some 40,000 same sex couples raising children in California. This injustice is causing a direct harm to those children by saying that your parents cannot get married.”

Whatever the ruling is going to be; those arguments proved that opponents didn’t have a compelling argument against marriage equality other than immense dislike towards gay people. News channels here in USA were filled with news about those historic Supreme Court arguments. A recent poll came out saying that majority of Americans support Marriage Equality and most importantly, 80% of young people less than the age of 30 support marriage equality. Literally, the opposition for same sex marriage is dying. A majority of senators were falling over themselves to change their stance and said they support marriage equality.

This monumental change in the minds of Americans came not by political power or some magic. It came because gay people came out and told their stories. Today everyone here knows someone who is gay; so this issue is something that is personal to them. Gay people have come out and have put a human face to gay rights. These are not some third person issue for many people. Gays are everywhere, we are doctors and engineers; farmers and teachers and construction workers. We are their sons and daughters; fathers and mothers and their neighbors. Once they know that we don’t have horns and we are just like them it moves people to accept us and makes them stand with us and fight for us.

Forty years ago Thea Spyer and Edith Windsor got engaged but Edie could not wear a ring because she was in the closet. So she wore a circle of diamonds as a pin on her coat every day for the rest of her life. Last month eighty three year old widow Edith Windsor stood on the steps of the highest court in her country and said, “Today, I am an out lesbian who just sued the United States of America and it is kind of overwhelming for me.”

This change happened because of ordinary gay people who started coming out and in that process changed the world.

Rachel Maddow summed it up nicely in her news segment calling it a historic week for gay rights.

“When you walk out under the night and look up you are seeing some stars that are relatively close up … but you are also seeing some very far way stars; stars whose light comes from so far away to get to us that it is pretty old light by the time it gets to us; so old that the star that made that light might actually be gone by the time you are seeing it. What you are actually seeing is the imprint of something that has long gone.

There are all sorts of people and all sorts of fights that technically are not still around. But those fights live, and we can see them. We can see their light in some of the biggest-deal and most difficult things that we do today. Whether or not you see equal rights for gay people as your particular fight–whether or not you even agree with that particular fight–this was a really big historic week for that fight, and therefore for our country. All the work, all the generations of work to get here, in fact, – got us here. It worked.”

That is what I ask all of our people. Please don’t think about the consequences; please don’t think about the results, but fight. Fight with the knowledge that the light of your fight will live long enough even after you are gone. Know that we stand on the side of justice and equality and our fight is actually changing the world; saving lives of so many of us. Our fight will still be there when we are gone knocking on people’s heart and appealing to their humanity and still changing the world.

I so wish, this happens in India too because it would change some other kids life.