An Interview with Roopa Rao, Director of Web-Series ‘The Other Love Story’

The Other Love Story is a 12 episode web-series about Aachala and Adya, and is India’s first lesbian web-seriesand set in the 90s. Gaylaxy had a chat with the director Roopa Rao, who tells more about the project.

The ‘Other’ Love story. What does the word ‘other’ signify- a different sexuality or sarcasm (that this is just ‘another’ love story)?

A different sexuality, yes. Like any other love story, yes. But sans sarcasm, just stating the fact. Also I somewhere want to bring in the connotation of this love of Aadya and Aachal belonging to that space where there are no rights or wrong, which for sure is not in this world but the ‘other’ world. These two girls share a very intense love for one another which surpasses all logic.

What made you think of this story?

As I have always said, I didn’t think of the story, the story thought of me and came to me. I feel stories have a life of their own, and they choose people to find a form in this world, and this one chose me.

What was the reason about showing this love story in the 90s era?

I grew up in the 90’s, the simple non­-complicated era where Bollywood romance ruled my life. I am a complete Yash Chopra film fan and I wanted to bring in all that I miss in my film. Love letters, land line phones, random meetings at the bus stop and many more. It is like a tribute to our teenage years. And Aadya and Aachal fall in love in that period, when there was absolutely no reference point or information, they don’t even know that such a thing happens in the world. They feel what they feel and they act on it because of the force with which love hits them. I just wanted to explore this space.

The love story is shown to be netted between two girls from a middle-class background. Is there any specific reason you chose for them to be this way?

I just wanted to tell a story, which is as realistic as possible, like straight out of Indian streets. My Aachal and Aadya are not glamorous but they are real and really beautiful. Aadya and Aachal are one among us.

Did you face any obstacles to get the web series started because of the theme of the story ? If yes, how did you overcome these obstacles?

Many! From finding actors to finding producers, each day was a war within and out; grit and stubbornness got us through it all I suppose.

Was it difficult for the actresses to get into the role?

This is a question that they can answer better. But I think, it is anyway a difficult process if the character written is far from the original person that the actor is. After having lived the cellphone and internet era, it was difficult for them to erase that aspect of their lives and just be in those times. I wouldn’t let them use their cell phones during the shoot.

Do you have any more plans to make more series touching the LGBTQ issue ?

I have a love story that I have written which involves a transgender, again straight out of Indian streets. That one is based on a real incident that I witnessed in Bangalore. Lets see if I ever get a chance to make it into a film. 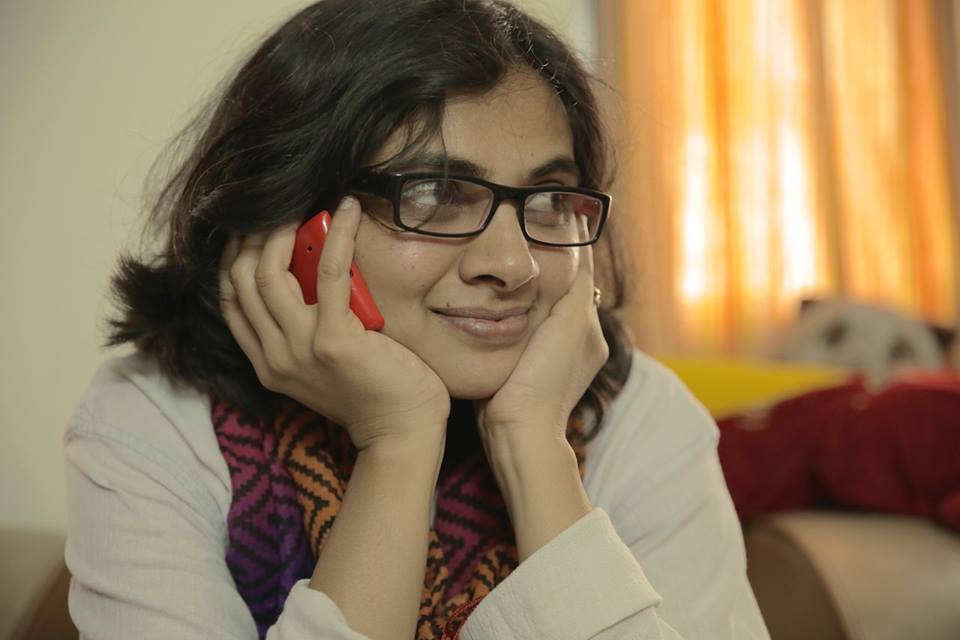 Please, share a few of your memorable moments while making of the series.

Oh there are many! I have a very strong visual memory, so I can actually recall each day, each moment if I sit back and each were so intense and so surreal. Can’t believe we have actually completed the film and people are already watching it. We shot outdoors mostly in guerilla style. So we were shooting in Railway station, I and my camera man were inside the train, and the train started moving. We ran and jumped off the train and I jumped in the wrong direction and almost fell on the tracks –I missed by inches , otherwise I would have come under a moving train. My cast and crew saw me fall, they didn’t expect the fall to be so dangerous, at first they started laughing and then they ran towards me, and I just sat up to avoid undue attention. And later in the evening after pack up, I realized I was unable to sit and unable to move my wrist. It was one hell of an experience

The message is quite apparent from the trailor and the first three episodes but do you want to convey anything more than ‘our love is just like the love between straight couples’?

I am actually not trying to give any message. If the other love story manages to engage audience for the time they spend watching the episodes, it is good for me. If they get any message out of it, then it is great.

It’s clear from the step you’ve taken to make this series that you’re pro LGBTQ community but what is your personal specific stand on this issue?

I am not someone who believes in community mindset, I am a hermit by virtue. But I understand the need of human beings to find their own kind and herd. It provides safety and sense of belongingness, which each of us seek in every passing moment. I just feel in this vast universe, we are born equally, same air to breath, same water to drink. To each his own, and nobody gets out of here alive. So lets just do what best we can do, live gently and get the hell out of here. To accept and co-exist is the most easiest and at the same time most difficult thing to do I guess.