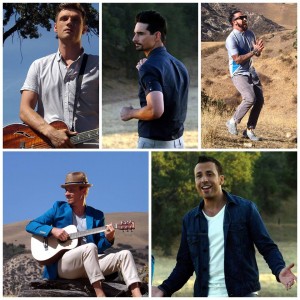 The hit boy band of the 90s Backstreet Boys are releasing their new album In A World Like This, and the video of the lead song of the album shows marriage equality as one of the major developments of the world. The video explores three huge moments in history – landing of man on the moon, 9/11 terrorist attacks on the Twin Towers and marriage equality.

The album would be released on 30th July and marks 20th anniversary for the band. The music video debuted today on the American show Good Morning America . A.J. McLean, one of the singers, told GMA, “The concept of the video is based on the song, which tells a story of how love conquers all and ‘in a world like this’ that we live in, with all the craziness and negative energy that can go around, with real love you can overcome anything.”

The video, which shows couples watching news on a TV set, ends with news of Marriage Equality being shown on the TV, with a gay couple exchanging rings and a tickler that reads: Breaking News: Gay Marriages resume in CA after Prop 8 ban is liftend on June 28 2013, as a lesbian couple are shown rejoicing after listening to the news. “Marriage equality is an ongoing issue for years. BSB wants to show our support for the LGBT community and we believe that two people of the same sex should have the right to get married,” McLean said.