The Power Of Music: Jeff Roy’s Journey Through Queer Mumbai 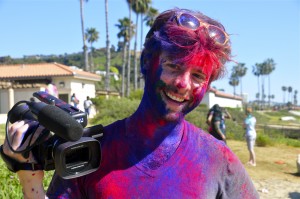 “I saw a group of hijras for the first time while travelling on a train from Varanasi to Kolkata, and was captivated by their unique mannerisms, clapping, and brief moments of confrontation with other passengers. From then, I wanted to learn more about them.”

American film-maker and PhD student in ethnomusicology at UCLA, Jeff Roy came to Mumbai in fall 2012 to film a documentary on music, dance and performance art expressions of the city’s LGBTQI and hijra communities. On July 19th, he screened a presentation stringing together videos alongside interviews and performances from established and emerging performances in contemporary and folk traditions at the prestigious Godrej India Culture Lab in Mumbai.

The hijra is often projected in the media as a vulgar entity devoid of training, skill or talent. Jeff’s documentary aims to unpack these stereotypes through a discussion of the LGBTQI and hijra communities are challenging set notions through an amalgamation of the new and the traditional.

Post the decriminalization of section 377, political activism and consequent media exposure has boomed, assisting the queer community to enter the professional foray with their skills and unique voices.

Although music and dance are an intrinsic part of the life of a hijra, often their sole source of income, they often end up exploited. “My presentation took a look at how these communities are using these previously exploited tools to empower themselves and voice themselves through music and dance,” says Jeff. One of his first videos featured Prince Manvendra Singh Gohil, who hosted a three-day fete to provide a platform for young, emerging LGBTQI artists to perform alongside established names. Other notable features included the ‘Dancing Queens’, a not-for-profit dance company comprising Hijras, transmen, kothis and gay men.

One of four Fulbright-mtvU scholars, Jeff first came to Mumbai in 2008 as part of his MA, to conduct fieldwork within the hijra community. “During that time, I got to know individuals within the community. Many of them are now good friends,” says Jeff.

A professional western and Indian classical violinist, Jeff’s first film, Rites of Passage, has been screened at over 50 international film festivals and recently won the Special Jury Award for Best Documentary at the Kashish Mumbai International Queer Film Festival. He has performed with internationally renowned musicians, including Ustad Imrat Khan, Ustad Shujaat Khan and Dave Brubeck.