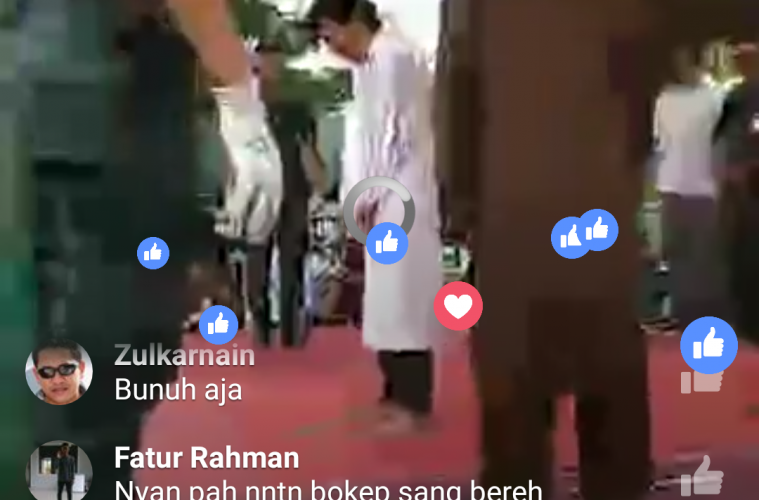 Flogging of gay men in Indonesia Live Streamed on Facebook

The two gay men who were sentenced to lashing for engaging in gay sex by a Shariah Court in the Aceh Province of Indonesia, had their sentence carried out today. The two were flogged 85 times each at a public spot today. However, more horrifyingly, the whole episode was live streamed on Facebook.

Serambi TV, a media/news company in Indonesia, live streamed the whole flogging on its Facebook page. The Facebook page has over 110,000 likes/followers. The live stream showed a man wearing a white dress standing on a platform with his head bowed down, while another man in a black robe could be seen flogging him. A huge crowd too had gathered around the area to witness it.

Facebook live stream has been used recently to broadcast many violent episodes lately, for which the social media giant has come under sever criticism. In one such incident,several teenage boys in Chicago live-streamed the sexual assault of a 15-year-old girl. In another incident, a man live streamed killing his 11 month old daughter, before committing suicide himself. In all these cases, Facebook was criticised for having allowed such violent acts being broadcast live, and the videos were accessible to people for a number of days before they were taken down.

The video of the flogging was still accessible on Facebook at the time of writing the report.

Update: This writer had reported the live stream for violent content using Facebook’s tools, and received a message from Facebook that the video does not violate its community standards and instead received a suggestion from Facebook to block or unfollow the Serambi TV page.