Stuart Hatton Jr from the United Kingdom was crowned Mr. Gay World 2014, while Indian contestant Sushant Divgikar made it to the Top 10 list. Kiriakos Spanos of Cyprus was the first Runners up, and Robert Lowlor of Ireland was the 2nd Runners Up.

Sushant, who was representing India in the 6th annual Mr Gay World contest, won two titles in the second day of the contest. He won the titles of Mr. Congeniality and Mr. Art. He also won the People’s Choice Award.

The contest this year was held in Rome. Delegates from 32 countries, including Pakistan, Syria and Namibia, participated this year. Some of the challenges the delegates faced were a written test, photo session, sports challenge, swim wear competition, online popular vote, art challenge, speech and a strenuous “job interview” in front of seven judges from all over the world.

The competition describes itself as ‘searching for a global gay man as an ambassador for LGBTs.’ ‘Mr Gay World is more than a beauty contest, it is the toughest job interview in the world! Mr Gay World celebrates the pride and rights of the International Gay Male,’ their press release said.

Pool party where the contestants got to relax and recharge before the reality of the competition sets in the next day. (Photo: Beate A Tecza/MrGayWorld.com) 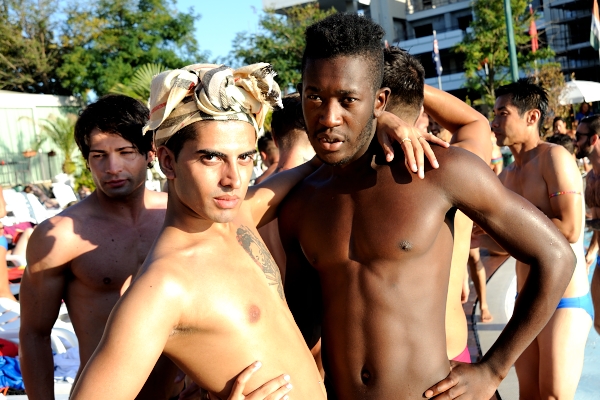 Sushant with another contestant (Photo: Beate A Tecza/MrGayWorld.com)