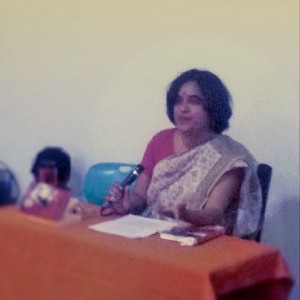 Ruth Vanita during the talk in Bangalore

It was a packed house in Bangalore for author Ruth Vanita’s talk titled “At the Heart of Tradition: Two Decades of Researching Same-Sex Love”. The talk was held this Sunday at Shanthi Road Gallery in Bangalore.

Dr Ruth Vanita, author of books like Same-Sex Love in India, Love’s Rite: Same-Sex Marriage in India and the Westand Gender, Sex, and the City: Urdu Rekhti Poetry in India, talked about the various stories (and their various versions) of same-sex parenting/couples present in Hindu scriptures. From the story of Bhagirath, who had two mothers, to how same-sex attraction is sometimes explained in terms previous birth, the talk had her presenting the audience with an Indian culture that never shied away from accepting same-sex bonding in the society, and viewed sex as not just an act of procreation, but also as an act of pleasure.

Dr Vanita also read out Urdu poems from her book Gender, Sex, and the City: Urdu Rekhti Poetry and told the audience of how pre-colonial era, urdu poets were not censorious about sex, or even love for a person of the same sex. Later, during the Q&A session, Dr Vanita pointed out the selective ways in which religious texts are used or interpreted. Citing an example from Leviticus, she said while the passage asking a “man not to lie with another man as he lies with a woman” is often quoted, such people often leave out the lines which also asks to put to death people who curse their parents (Leviticus 20:9 “‘If anyone curses his father or mother, he must be put to death.”)