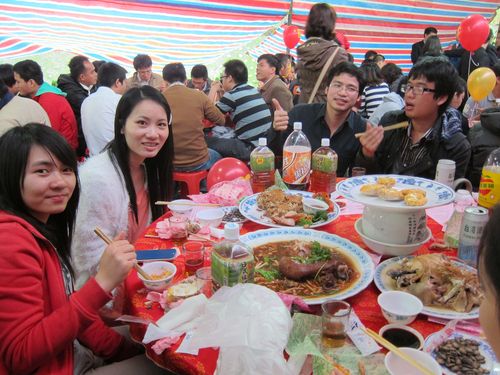 Last Saturday Taipei witnessed mass wedding of around 30 same-sex couples, aiming to endorse marriage equality more firmly. The occasion attracted over thousands where such couples tied knot in a symbolic “mass-wedding banquet” intending to pressurize the lawmakers of the country to legalize same-sex marriages.

Focus Taiwan, a local daily reported: “ The alliance hoped that the banquet would drive up support for an amendment that would legalize gay marriage, civil partnerships, and the adoption of children by diverse families in Taiwan.” Couples sat around tables decorated with red cloths printed with the Chinese character for “wedding”, as they had dinner and watched a video recording of local celebrities showing support as well while live performances played in a makeshift banquet venue in a square outside the presidential office in Taipei. “This looks like a traditional wedding scene and even if it’s not real, I think a picture is worth a thousand words and I hope we will get more public attention and support for same-sex marriages,” Richard Chen, a 22-year-old student from Taipei told the news agency AFP.

On the very same day, renowned Korean gay film director Kim Jho Gwang-Soo and his partner for 9 years also tied the knot in a public ceremony in central Seoul, although same-sex marriage is not legally recognised in the country. Asian countries lately have picked up the platform of public marriage to demonstrate the need and relevancy of recognizing same-sex marriages. It’s also to be noted that the world has come out to applaud such brave step every time and locals appeared to congratulate couples on their wedding day.

According to The China Post: “Taiwan is considered one of the more liberal countries in Asia in terms of homosexual issues and hosts one of the largest gay pride parades in Asia each year.”