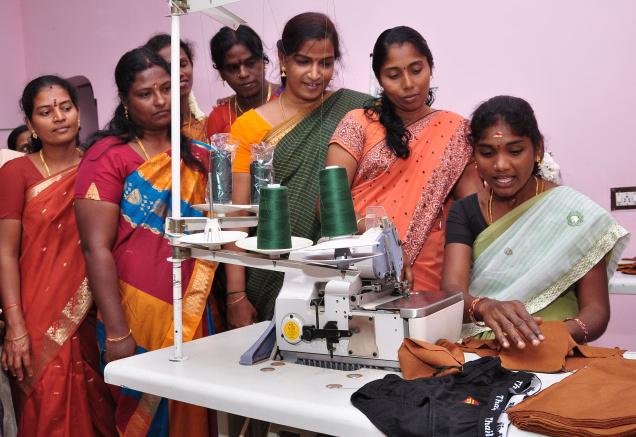 A woman employee at work as Priya Babu (third from right) and Bharathi Kannamma (fourth from right) look on, in the presence of other women employees, in a tailoring unit at Nagamalaipudukottai, in Madurai. Photo: R. Ashok (via The Hindu)

Two transgenders- Priya Babu and Bharathi Kannamma- have started a tailoring unit in Nagamalai Pudukottai on Madurai’s outskirts, reports The Hindu. The Rs 10 Lakh tailoring unit has been funded by Coimbatore-based Thaila Garments and is expected to employ about 15 women. They have already taken orders to stitch undergarments for men and women.

However, the two had initially met with a hostile response from local women. Members of the All India Democratic Women’s Association (AIDWA) had to organize a few sessions to convince local women and win their confidence. “The women were hesitant to work with us initially. But after we took them following an exposure to a tailoring unit in Vadamadurai, they have become extremely supportive and encouraging,” Ms. Babu told The Hindu.

With the help of AIDWA, women tailors stitching at home were identified for the unit. The duo have plans to expand their business and set up five tailoring units and also plan to start a training unit exclusively for transgenders.