Gay Korean Director Ties Knot With His Partner In Public 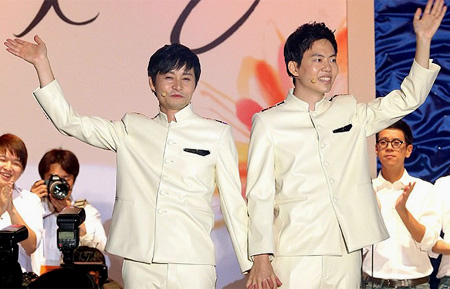 South Korean film director Kim Jho Gwang-Soo and his partner Kim Seung-Hwan tied knot in a public ceremony in central Seoul on Saturday, despite the fact that same-sex marriage is not legally recognised in the country, reports Fridae Asia. Keeping the globe amazed, the duo celebrated their marriage and plan to formally apply to get their marriage legally stamped.

The noted Korean director, Kim, 49, said at the news conference: “It is important whether or not we become a legally bound couple. But more importantly, we want to let people know that gays can marry too in our society. Now people cannot but call us as a married couple as we have had a wedding.” The couple is determined to take their case to the constitutional court if their marriage registry is denied. South Korean lawmakers recently proposed an anti-discrimination law that would prohibit discrimination based on religion, political ideology, or sexual orientation. However, the law faced serious opposition by conservative Christian legislators.

Hundreds in Seoul attended the marriage ceremony of the country’s well known gay couple who were believed to be dating since 9 years. The newlywed couple has expressed their dream to see Korea among those countries where same-sex marriage isn’t seen with shocking eyes!