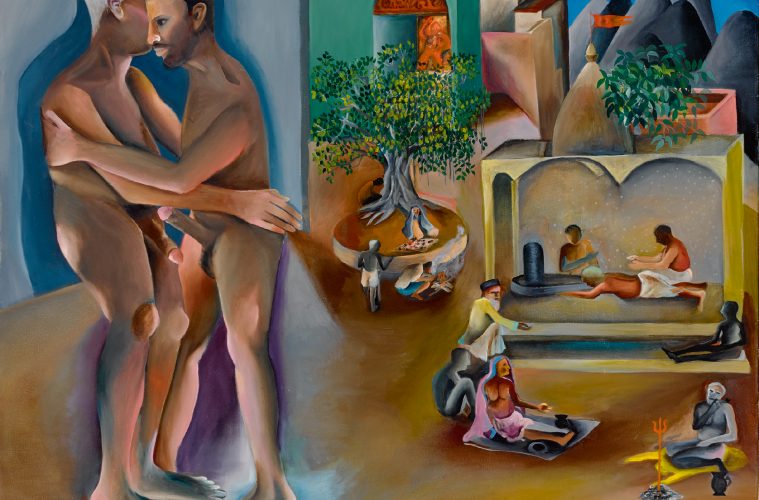 Indian artist Bhupen Khakhar’s 1982 painting titled Two Men in Benares has been sold for £ 2.5 Million (Rs 22. 30 crores) at a Sotheby’s auction in London. The painting was first unveiled in 1986 in Mumbai and shows two naked men in an embrace, with scenes from the ghats of Benares in the background.

Bhupen Khakhar , a leading artist in Indian contemporary art, died in 2003 and his paintings often depicted homosexual themes. He became the first openly gay artist from India when Two Men in Benares was unveiled in Mumbai in 1986. He was awarded the Padma Shri by Indian Government in 1984.

“Two Men in Benares(1982) is the most explicit of what the artist himself called his “efforts to come-out in open”, and to create a new iconography of homosexual love, consciously very different from that ofDavid Hockney: ‘Hockney is concerned with physical beauty – I am much more concerned with other aspects, like warmth, pity, vulnerability, touch.’,” Khakhar had told Timothy Hyman Ra, an art writer and curator, in a conversation in 1994.

“It is the most explicit of what the artist himself called his ‘efforts to come-out in open’, and to create a new iconography of homosexual love,” Sotheby’s said on its website.

“Mr Khakhar’s painting was among the 29 works of 20th century Indian art that went under the hammer from the private collection of Swiss collectors Guy and Helen Barbier at the sale that realised a combined total of Rs. 66.23 crore.” noted NDTV.