A scene from the movie Morgan

Morgandirected by Michael Akers from the USA won the Best Narrative Feature Film at the 4th KASHISH Mumbai International Queer Film Festival. The award, which has a cash prize of Rs 30,000 sponsored by acclaimed actor Anupam Kher and his Actor Prepares school for actors, was handed out at a glittering closing ceremony of the festival on Sunday evening. “We thank the festival for its amazing work in helping to bring film’s such as ours to the audiences who desperately need it,” said Akers.

The Best Indian Short Narrative film award was won byUrmidirected by Jehangir Jani. The award carried a cash prize sponsored by Kher and Actor Prepares. “This is my first award for a film but feels like a lifetime award,” said Jani, who is also a noted painter and sculptor. The award was given by renowned filmmaker Kalpana Lajmi.

Anupam Kher emphasised his support to KASHISH, “As a Chief Guest last year at Kashish 2012, I was really amazed at the quality of cinema that I got to see. Sponsoring awards for Kashish is our (Actor Prepares’) way of acknowledging their efforts for a better Cinema with little means.”

Hide and Seek(Chuppan Chupai) from Pakistan won the Best Documentary Feature award. The film directed by Sadat Munir and Saad 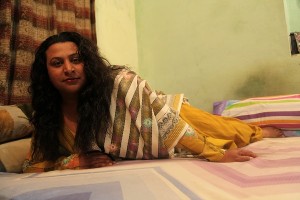 A Still from Hide and Seek

Khan is one of the first films focusses on the lives of the gay and transgender community in Pakistan. “Due to the subject matter I knew I won’t be able to get much public screening of this film in Pakistan, but I’m happy that it screened in India, especially Mumbai, where picture of LGBTIQ acceptance is not the same as elsewhere in South Asia. This award means a lot to me and my team, thank you once again to the Kashish Team and the prestigious Jury,” said Saadat Munir.

“Both these films are very different from each other,” noted Roy Wadia, Director, Wadia Movietone and Special Jury for the Riyad Wadia Award. “But each tell their story in an honest, compelling way, combining solid screenplays with fine performances and technical prowess, all the more remarkable given these filmmakers are at the very beginning of their careers.

The award ceremony was a glittering affair with electrifying performances by the Dancing Queens who paid a tribute to Bollywood actor Madhuri Dixit, contemporary dancer Bhumika and Bhavin Gala and students from his dance academy. A short film Riyad Remembered directed by Ashish Sawhny was also screened at the closing to commemorate India’s first gay film maker Riyad Wadia on his tenth death anniversary.

Earlier in the evening, India’s top fashion designer Wendell Rodricks handed out the KASHISH trophy to graphic designer Prachi Patil-Kotkar, who had won the KASHISH International Poster Contest. “Kashish has become an important part of movement towards greater visibility of LGBT community,” said Wendell, who added that he would personally add Rs 20,000 to Prachi’s cash prize.

KASHISH Mumbai International Queer Film Festival since its inception in 2010, has provided a platform for screening LGBT films from India and around the world in a mainstream space. It is today South Asia’s biggest and most mainstream LGBT film festival and one of the first such film festival to receive approval from the Union Ministry of Information and Broadcasting. The festival was held at two venues between May 22-26, 2013, at Cinemax Versova, a mainstream multiplex at Andheri West and Alliance Francaise at Marine Lines.

“I was deeply touched by the response KASHISH elicited this year. It was a momentous affair – with humongous audience turnout, jam packed shows, engaging panel discussions, great celebrity turnout, huge media buzz – and above all, a loud and clear appreciation of the films that were shown. It is a testimony to the fact that there is a great need for screening and discussing queer cinema and for greater understanding of LGBT lives,” said Sridhar Rangayan, festival director.