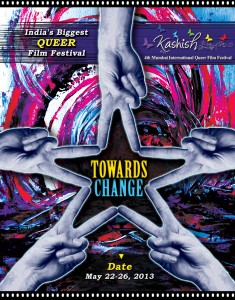 “The victory sign forming a star is graphic and unforgettable. It is also interesting that the clichéd rainbow flag colours have been totally ignored for an artistic backdrop. I loved it,” said Wendell Rodricks while announcing the winner.

The contest to design the official poster for the upcoming 4th KASHISH Mumbai International Queer Film Festival saw a record number of entries from professional and amateur designers as well as design school students from across India and several other countries too.

Prachi, who graduated from Sophia Polytechnic, and works as a senior visualiser, illustrator and animator, said participating in the contest was a great experience to remember. “Receiving this wonderful award is such an amazing honour and I would like to thank the KASHISH team for giving me such a great opportunity,” said Prachi.

Explaining the concept behind the poster, Prachi said that the backdrop was meant to reflect the “colourful waves, which represent a churning of dreams in the ocean of life. The five “victory signs” reflect diversity – we may come from different places, have different languages, individualities, dreams and desires, but when we come together, we change and become a thing of beauty like the star.”

The winner of the poster contest will receive a KASHISH trophy and a gift hamper. The winning design will also be featured on catalogue cover, print and online advertisements, banners, cinema slides and delegate cards.

Festival director Sridhar Rangayan said, “The theme of KASHISH 2013 is reflected very aptly in the design of the poster. The design is vibrant and energetic, and has a thrust forward, which KASHISH promises this year with its theme ‘Towards Change’. This year, the audience can expect a range of films that push cinematic boundaries and daringly question set notions of queer sub culture.”

KASHISH 2013, the fourth edition of the India’s biggest and only mainstream queer film festival, will be held between May 22-26, 2013 in Mumbai at a multiplex and Alliance Française de Bombay. KASHISH Mumbai International Queer Film Festival is the first and only gay & lesbian film festival in India to be held in a mainstream theatre and the only queer festival to receive clearance from the Ministry of Information and Broadcasting