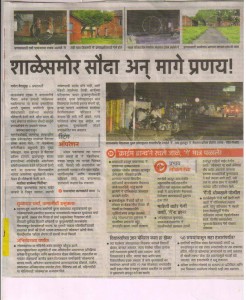 The report carried by Lokmat Amravati

A Marathi daily ‘Lokmat Amravati’ has been running a sort of “witch hunt” of for the past couple of days. A widely read daily in the districts of Amravati, Maharashtra, ‘Lokmat Amravati’ boasted carrying a sting operation covering the homosexual activities getting strikingly widespread in the town. The daily managed to put up the story as front page cover report flashing it as “Samlingi Purush Sambandhacha Amravatith Deshpatlivaril Adda” (Amravati Becoming a National Level Den for Homosexual Activities) on 11th August 2013. The report carried a sub-heading ‘Tarun Pdihi Dhokyat’ (Young generation is in danger). This was followed by two more articles on similar lines 13th and 14th August, claiming to expose the other points where gay men meet.

The correspondent Ganesh Deshmukh brought out the common meeting joints of the gay men and manifested the story with a terse tone marginalizing and criminalizing the activities of members of LGBT community and putting absolute disgrace to them. The reports describe gay men as “addicts of this kind of sex”. Calling it an “erosion by western culture of men trying to fulfill their unnatural desires”, the report says that nearly “4000 men have fallen prey to this gay culture”. The paper claimed that after the “expose” plain clothes policemen raided these spots, but couldn’t entrap anyone. “In this curious world of gays we see men of all ages- from adolescents to old men. From the rich to the very poor we see men who have become addicts to this kind of sex. Some of them are holders of responsible and powerful posts while others are businessmen with tight business schedules,“ the daily wrote.

After the initial “sting” that was published on 11th August, the Lokmat Amravati office was contacted by CBO (Community Based Organization) Samarpan Trust explaining the potential harm that such biased and homophobic reporting could do. However, the daily ignored such requests and published more articles on similar lines in the next two days. The reporter went ahead claiming that newspapers had received many inquiries on how gays look like or was he not scared while covering the news. In a section titled ‘Abinandancha Varshav’ (Shower of Wishes), the daily boasted: ‘Many readers called the newspaper to congratulate us for highlighting such an issue for society’s upbringing. This topic is getting huge mouth publicity since Hindi readers are also subscribing to this daily for this sting operation while people are on rush to share the same over WhatsApp.’  The reporter Ganesh Deshmukh had been sensitized by the CBO Sarathi Trust in December 2010 when his homophobic articles alarmed Nagpur on a wider scale.

Activists and community members have condemned such irresponsible and homophobic reporting.  Talking to Gaylaxy, Harrish Iyer said, “Any media or reporter can’t assume a moral code for themselves and put it on others. Being a democratic country, everyone has a right to life of dignity, which shouldn’t be compromised by such media reports.”

(With inputs from Nakshatra)