Gays, Cricket and Rape – Why it was wrong to link them all 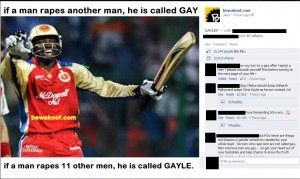 A Rape Joke that was posted by Bewakoof.com

India is a country where cricket triumphs all other religions. Cricket is a religion in itself in India and Sachin is often referred to as God of this religion. It wasn’t surprising then that the whole country burst out in hysteria when Chris Gayle smashed Pune Warriors with his batting skills and made a whopping 175 in just 66 balls. Every cricket match is generally followed by a flood of cricket related updates on my timeline, and this match was no different. But there was something special this time. Gayle has the word ‘gay’ in his name, and so, like Bollywood (which loves to use gay caricatures to induce laughter) Indians lapped up this opportunity of poking fun at gays and the defeated team and soon there were various posts on Facebook and other media.

But this time, it did not just involve some gay bashing, but tended to relate another very serious issue that has been plaguing the Indian society – rape. A gag posted on Facebook by bewakoof.com read, “If a man rapes another man, he is called gay; If a man rapes 11 men, he is called GAYle”. There were multiple problems in this single sentence. Apart from its very homophobic and stupid tone, it made rape look like an achievement. And the other disturbing fact was that it had received over 18000 likes and 15000 shares, which means, so many thousands of people either actually considered rape as a badge of honour to be conferred upon a person who has smashed his opponents black and blue; or; consider rape too trivial to joke about.

The post very certainly gave out an impression where rape was some sort of a very masculine thing and thus talks about raping not just one, but 11 men!! There is another underlying current to it. While women are often considered to be physically weaker, men are considered physically strong, and thus, raping of 11 men would be a super macho thing that would illustrate someone’s physical strength (in this case Gayle’s). In whichever way you see this, the message seems that rape is some sort of an achievement in a man’s life and thus Gayle’s powerful inning could only be appreciated by equating it with rape, which is also a lot about power. This on the other hand talks more about the prevailing mentality in India, the rape culture that we are all part of without even realising about it, and could also throw some insights into why such high cases of sexual violence occur in this country.

On the homophobic side of it, the “joke” not only called a man who rapes another man as gay, it totally seems to look at being gay or homosexuality as nothing beyond sexual abuse. In a country where people still have huge misinformation about homosexuality and have their own misconceptions, this gay rape joke was not only ignorant of facts, but highly misleading too!!

Even after Gaylaxy reported about the gay rape joke equating gays with rapists and trivializing the issue of rape, a number of people have been commenting that it was just a joke and that nothing much should be read into it. That we “lacked a sense of humour”. I don’t understand, how can someone enjoy being called a rapist? Would you enjoy if I use rapist as an appellation for you? Would you feel honored if I called out to you as, “Rapist XYZ… instead of Mr. XYZ”? What is so funny about rape that you could actually make a joke of it? That too when every single day there are reports of rape and gang rapes that fill the newspapers, when a 5 year old child has foreign objects inserted inside her. Would you also find it funny to may be go to someone’s funeral and then try and make fun about the person who died? Or was it the idea that even a man could be sexually assaulted by another man that you found funny?

Harish Iyer was quoted in Mid Day as saying, “I am scared to even imagine, what would have been the reaction of people if someone wrote, ‘If a man rapes one girl he is a man. If he rapes 11 girls he is alpha male.’ But just change the gender of the victim and this will be perceived as funny. Rape is a reality for all sexes.” Now tell me, do you find that funny too?