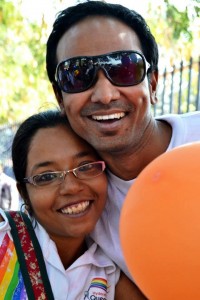 Hyderabad to witness its first gay pride parade this year

HYDERABAD: The city is expected to have its first gay pride march this year. The event is slated to be held by the end of 2012 with the cooperation of various LGBTQI (Lesbian, Gay, Bisexual, Transgender, Queer and Intersex) groups working out of Hyderabad. While deliberations on the same are on, organisers of the event say that they have various security aspects to look into. The announcement has come at a time when various sexual minority communities are holding programmes to..

The city police has not yet given its nod to a gay pride walk, scheduled for October 16 The Hyderabad Police might just play spoil sport by denying permission for the Hyderabad Pride Parade, the first ever Lesbian, Gay, Bisexual, Transgender, Queer and Intersex (LGBTQI) Pride Parade in the city. Several city based LGBTQI collectives were planning to jointly organise this event scheduled to take place on October 14. They were however, in for a shock when the cops denied them permission on…

Searching for Hyderabad Queer Pride March on Google, I used to get this kind of news for many days. It was very disappointing that people of Hyderabad were not supporting this great event. And finally after a lot of efforts, struggle, support and dedication, the long awaited event and pioneer moment in Hyderabad happened with a bang. It was the moment when every person attended for the single cause of celebrating being oneself and was proud of each and every person present there.

‘It was a carnival atmosphere. Clad in gaudy costumes, sporting bright masquerade masks and wearing over the top make-up, the city’s Lesbians, Gays, Bisexual and Transgender (LGBT) community came out into the open and poured onto the Necklace Road stretch,’ says The Hindu

“Do I look like a criminal? No, but according to IPC 377, I am a criminal because same-sex is criminal. The Supreme Court should give a favourable judgement and decriminalise same-sex between consenting adults. This will also pave the way for same-sex marriages,” said G. Krishna of Suraksha Society.

Several LGBT members from Mumbai, Bangalore, Pune and Delhi also turned-up. “Worldwide, gay community is being recognised but here discrimination still exists. The younger generation, however, are a lot more accommodative and understanding. Such rallies give us a platform to make public aware of our needs,” said Aarif Shaikh, General Secretary, Sarathya, an NGO working for LGBT in Bangalore.

Some of the posters held by them screamed for attention. ‘I love my boyfriend and can’t wait to marry him. Same sex marriage is everybody’s right’, declared one poster. Another placard announced ‘Gay by Birth, Proud by Choice’, while another said ‘Gay and Lesbians Make Great Bosses’.

All the people were shouting slogans like ‘I am Gay and it is okay’ , ‘Gay Hua toh kya Hua? Pyar Hua ikarar Hua’. The police and media were very supportive.

I thank Krishna Naidu and Suraksha Society team for organizing such an incredible event. Thank you Heroes Project for supporting and being there for whatever that was needed to be done. Thanks Wajood for organizing food, water and bringing energy and colours to the event. I congratulate and convey my regards to Darpan Foundation, Desiboys, Saathi and all the great performers on and off stage for their immense efforts. Also lastly, I thank all the people that came and supported the event and were responsible for sending the right message to the world and in a right way.