When He Cut My Hair 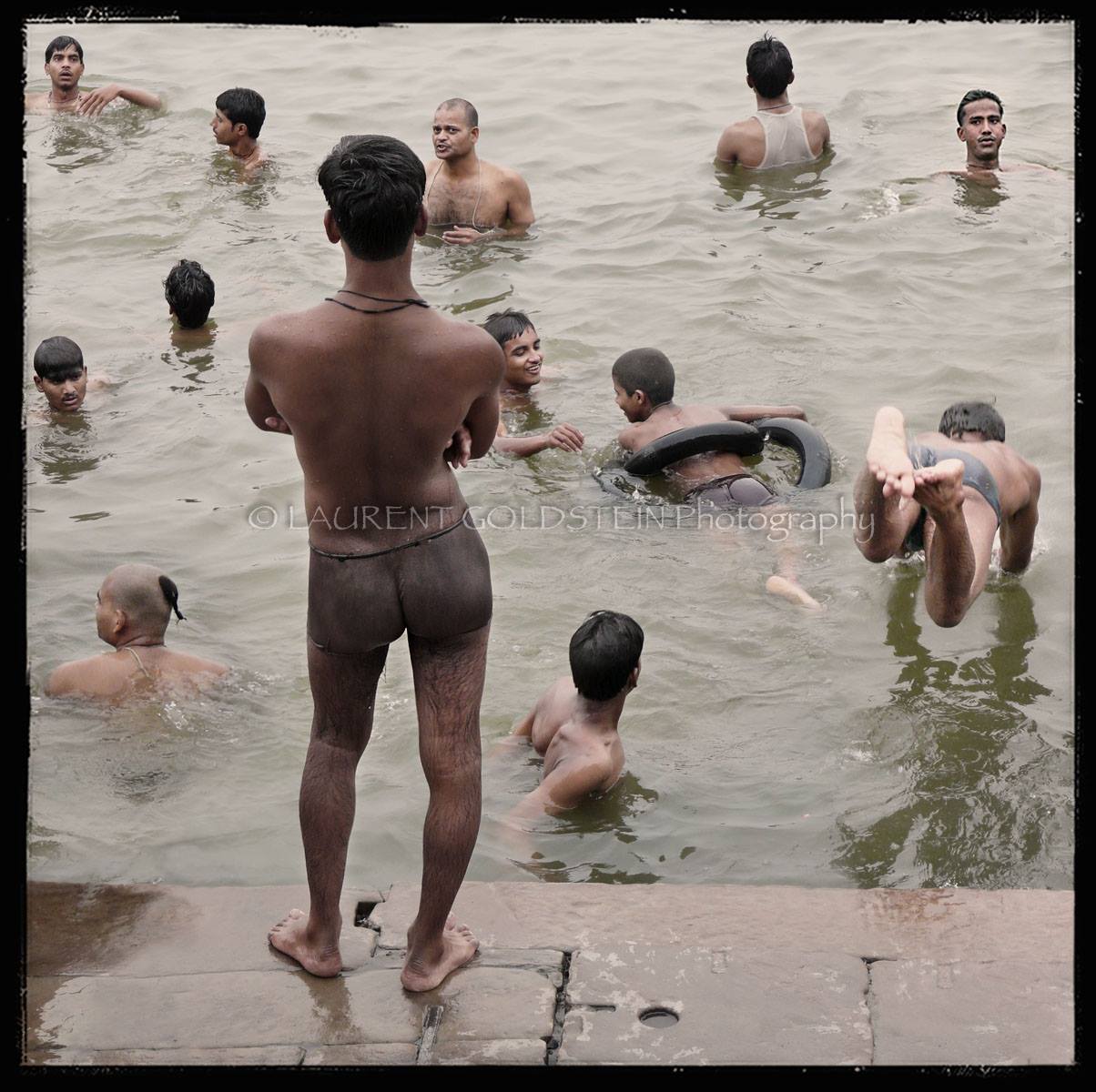 Alone In A Crowd (Photo by: Laurent Goldstein Photography)

I watch as he fills a brass lota with water, lifts it and pours it over his head.

The slow-flowing water of the river, ever new and fluid, meets the massive stone slabs that make up the ghat, ancient and immobile. And squatting there, on one of the lower steps nearest the river, is this beautiful man. He has a thin, white cotton towel wrapped around his waist, contrasting with his dark copper body. I watch how his back muscles work under the tight skin as he fills the lota, raises it and tips water over his head and down his body. Perhaps he is a pehlwan: he has a wrestler’s build. Near him is a group of boys, younger, slimmer, but also fit. Perhaps all are pehlwans. One is squatting on the step above him, arms wrapped around his knees; another is standing, his feet set apart, his hands on his small hips. They also are looking at this man taking his morning bath.

I remember how Papa used to wash the murtis in the temple. He would take each god and goddess, pour water over their bodies, then milk and honey, then rinse them with water again, and finally dry and dress them up for the day. He showed me how and let me help. I used to love taking part in that queer caring.

I look at the man again. He is standing now, facing the river. I see him from behind. I want to wash him, my hands on his body, respectfully. Would he let me though, an old man like me? He unwraps the towel and folds it. Underneath he is wearing a red langot, not covering much, generously revealing some of his round ass cheeks. My cock stirs and swells, a welcome sensation I have not had in a long time. I remember Abhishek. When his trousers came off and I discovered him wearing a thong that first time, the thin string, his marble ass, it made me crazy with lust. I pushed him onto the bed on his stomach, stroked his ass cheeks, lifted the string aside to reveal his rosy pink hole, rimmed him, smelling and tasting something reminiscent of the ocean, added some extra spit to his wet, soft hole, and then I fucked him, calling him bitch, calling him beloved.

I have seen images of Shiva wearing the langot. I know that our ancient scriptures associate it with asceticism and even celibacy. But with this skimpy piece of clothing, how can anyone think of celibacy? How can it not make men look and feel sexy? Shiva has always been my wild fantasy god. And his appearance, and the stories about him, have taught me that sexuality and spirituality go very well together. I mumble his name, a mantra, a mantra Papa first gave me.

The pehlwan is up to his waist in the river now, washing his jet-black hair, white lather making its way down his body to be carried away on the flowing water. I remember a story about Ganga that Papa must have told me; that she was a goddess whose powerful currents were tamed by being wound up in Shiva’s locks. Shiva has thick, matted hair. Kali has unbound, unruly hair. Parvati has combed, well-bound hair. Krishna has curly hair. Abhishek had long and wavy hair, not unruly, not well-bound. His hair was golden brown. His eyes were amber. I remember first meeting him in his salon, feeling his delicate hands on my head and neck as he cut my hair; how much I wanted him as I watched him in the mirror.

I remember when Papa died, how Abhishek again cut my hair, but this time he cut it all off, a sacrifice of beauty, a surrendering of vanity and ego, first with scissors, then the single-blade razor. I remember the feeling of the blade, cold and hard, the pressure of his supple fingers, careful, silent. Less than a month later Ma also died. Abhishek stayed with me. He cared for me. When my hair grew back out, it was white. He said he liked it, the snow-white head hair and beard a contrast against my sandy brown skin.

I grieved a long time for my parents. Death in the abstract is one thing. You can philosophise. When it happens to you, when someone you love dies, it is something else. I let my hair and beard grow. Abhishek teased me, pulled my beard, called me Guru Dev. He asked to suck my cock and called me Daddy, but as soon as he had said it he realised his mistake and said sorry. He did his best. I did my best. But we grew more and more distant. Before we parted he cut my hair and beard one last time.

The pehlwan must have finished his morning bath. He is coming back out of the water now, facing the ghat, us, the langot cupping his cock and balls, nothing more, just the red langot, almost drawing more attention to that area than if he had worn nothing at all. He catches me looking at him; at least I think so: he looks at me directly. I look away. Shame floods me, an old man eyeing a young man like that. Maybe he is provoked, having seen the desire in my eyes. I remember how I used to react to old men: their attention felt somehow insulting to my youth and beauty, and I would get angry. But maybe it is different for him. Maybe he is flattered. Or maybe it doesn’t even occur to him that there could be desire in me, this old man. If he comes up here after finishing his bath, if he passes nearby me, I will say something, tell him that he has a nice body perhaps. See what happens.

I am rather exhausted from all this excitement. I spread out my thick wool shawl and lie down, let my frail body be supported by the stone ghat. The spring morning sun is still soft.

I close my eyes for a moment.

When I wake up he is gone. So is the group of boys. I realise I have a hard-on and cover myself with the shawl. I remember dreaming that my cock was big like a lingam, boys and men lusting for it, someone pouring milk and water over it, over all of me, washing me. I dreamt something more, but I can’t remember. Was it related to death and dying? Dreaming here by the river is like yoga, they say. Anyone who dies here is liberated, they say. Shiva whispers something in your ear; a reminder that we are already divine and free perhaps. I don’t know, but I like the idea.

I decide to go for a haircut.

I make my way through the narrow alleys of old Varanasi and find a salon. Loud Hindi music and images come from a television on the wall. The barber is wearing a tight, pink T- shirt, tucked into tight trousers, his paunch pressing against the pink fabric. His mouth is full of paan, but he manages a few mumbled words as I sit down in the chair.

I look at myself in the mirror. Since Abhishek and I broke up fifteen years ago I have not cut my hair or beard. I have kept it neat and tidy though, my beard in a simple plait in the front, my hair similarly at the back. I don’t know what I want. In the end I tell the barber to take everything.

As the scissors flash and I see the plait of white hair fall, I remember an article I read once about the big business of hair in India. Much of the hair exports, which total crores of dollars each year, come out of the tradition of offering hair at temples. It is collected up and made into wigs that are then sold abroad, mainly in Europe and North America. Most Indians who offer their hair in acts of religious devotion are unaware of this. And most of those who buy the wigs are equally unaware of the religious aspect involved. As his scissors clip close I wonder if this barber also collects and sells hair. I wonder if my hair will become part of a wig on the other side of the world. I look at it. It is not bad. It is something different, long and white. Whose wig might it become? I like the idea that various parts of me become part of something and someone else; that while I may disintegrate, life continues.

The barber has started shaving me now. I feel his grip firm on my skull. He gently pulls my head back, lets me rest it on his cushiony paunch. He puts a blade near my throat. This stranger, my life. I feel his finger near my lips. I close my eyes.

At some point we must be very close, his face and mine. I smell cardamom, clove, camphor and something else. I smell rose petals. I smell the sweetness from his mouth. I hear him breathing, close to my ear, in my ear, speaking.

This story is included in Vikram’s latest book Lord of the Senses. The book will be launched in Delhi on 17th Dec at Kunzum Travel Cafe, Hauz Khas Village.

Vikram Kolmannskog is a man of many interests. His work is focused on therapy, law and society, writing, teaching and researching. More of his work can be found at www.VikramKolmannskog.no