Martina Navratilova proposes to girlfriend at US Open 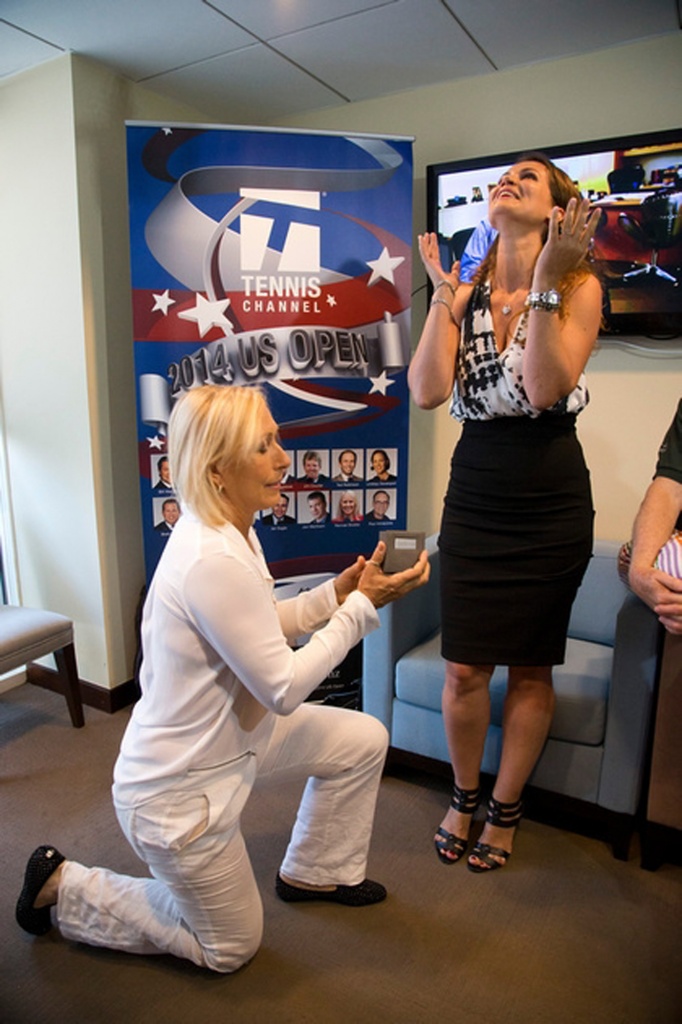 Martina Navratilova, one of the greatest legends of women’s tennis and 18 time Grand Slam singles champion, proposed to her long-time girlfriend Julia Lemigova on the sidelines of the US Open at New York on Saturday. Navratilova’s proposal, occurring soon after the men’s singles semi final between Kei Nishikori and Novak Djokovic, was relayed live on the big screens at the tennis court and drew a loud roar of approval from the crowd when her girlfriend accepted the proposal.

Navratilova, 57, started playing professional tennis at the age of 18 in 1975 and went on to win 167 singles and 177 doubles titles, the most by anyone in the Open era. These included 18 Grand Slam singles and 31 Grand Slam women’s doubles titles. She came out as a lesbian in 1981 after gaining citizenship of the United States, having sought political asylum there in 1975 while fleeing her homeland, Czechoslovakia. Navratilova has been involved in rocky relationships before, with a 6 year relationship with Judy Nelson, a former Texas beauty queen, ending in 1991 and another 8 year relationship with Toni Layton ending in 2009. Both separations ended in acrimonious suits for alimony that were later reportedly settled out of court.

Lemigova, 42, is a Russian entrepreneur and former beauty queen, who won the Miss USSR title in 1991. She was earlier linked to Edouard Stern, a powerful French Banker who was found murdered in 2005 having been involved a sado-masochistic bondage session. Lemigova runs a skincare business now and started dating Navratilova in 2006.

“We’ve been together six years and I can’t imagine my life without you. Please marry me,” said Navratilova, bent on one knee, the scene being relayed live on the jumbotrons throughout the stadiums. “I was very nervous,”she added later. “It came off. She said yes. It was kind of an out-of-body experience. You’ve seen people propose at sporting events before, in movies, in real life. Here it was happening to me. It was like I was watching myself do it.”

Navratilova has been a vocal advocate for gay rights, and is also involved with charities for under-privileged children and animal rights.