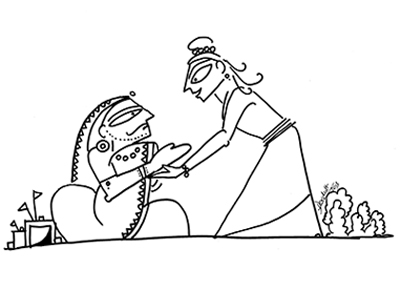 I once asked a hijra to narrate what she considered a sacred story from her community. This is what she told me:

When Ram returned from forest exile after fourteen years, he saw hijras outside the gates of Ayodhya. “Why are you outside, not inside?” he asked. And they replied, “Remember, the people of Ayodhya wanted to follow you into the forest. You told the men to go back. You told the women to go back. We are neither men nor women. You forgot to tell us what to do. So we did not go back. We waited for you to return and tell us what to do.” Ram felt miserable at this oversight. Unknowingly, he had caused the exile of these hijras. He embraced them, showered them with affection, promised all earthly and heavenly joys and took them along with him into his Ayodhya.

This story, so full of despair at abandonment and hope for inclusion, can also be found in cultural anthropologist Serena Nanda’s book on hijras, but it has no textual reference. We can argue it is a made-up fantasy of a marginalized community seeking validation. But that is the purpose of sacred stories. They are subjective truths that validate a community, their customs and beliefs.

But while Ram includes hijras into his Ayodhya, does the republic of India? Hijras see themselves as a third gender, but do their passports say so? Why do we want to force them into one gender or another? And by doing so, do we deem sexual acts of a hijra to be natural or unnatural, legal or criminal?

The Supreme Court judgement upholding IPC Section 377 is not just about gays and lesbians and bisexuals and transsexuals. It is about all queer people, that ‘miniscule’ population with ‘so called’ rights. Incidentally, it is also about straight people who want to express love using non-reproductive organs. Yes, it does seem creepy that someone wants to regulate so private a matter between consenting adults.

The word ‘unnatural’, which is part of this infamous law, came to India with the British. We included it in vocabulary of free India assuming it means the same thing as ‘not normal’ or ‘not culturally acceptable’. But the sages of India, known as rishis – those who saw what others did not see – clearly differentiated between the natural (prakriti) and the cultural (sanskriti).

Nature is governed by matsya nyaya, or the law of the fishes, where the big fish eats the small fish. Matsya nyaya means the same thing as jungle law or might is right or survival of the fittest.

Culture is born when this law of jungle is rejected. Culture creates laws and rules and rituals that seek to help the helpless, give rights to the meek not just the mighty, make room for the unfit not just the fit. To do so is dharma (potential or capability or capacity) for humans.

Humans are unique animals. We possess manas or mind, hence are known as manavas in the Puranas. The human mind has the power to expand (brah, in Sanskrit). Hence every human is a Brahma who inhabits a personal subjective mental reality or brahmanda. This ‘egg of Brahma’ can include people and exclude people. Accordingly a Brahma can make laws that make room for some and don’t make room for others. As is a brahma’s brahmanda, so is his sanskriti. Since manas is elastic, with wisdom, brahmanda can expand and so sanskriti can become increasingly inclusive.

In the Shiva Purana, Shiva beheads Daksha as his sanskriti excludes Shiva who does not align to Daksha’s notion of normal behaviour. Shiva then gives Daksha the head of a goat, reminding him of his loss of humanity.

Shiva is visualized as half a woman (ardha-nari-ishwara). At Mathura, he is worshipped as Gopeshwar, who becomes a gopi to dance with Krishna. At Nathdvara, Krishna wears women’s clothes (stri-vesha). These images and rituals may be seen as asexual devotional metaphors or as tacit approval of diverse genders and sexual behaviours. It all depends on the gaze (darshan) of the devotee gazing upon it. And darshan depends on how much the mind is expanded.

When the mind expands, we move from Brahmin (limited mind or seeking mind) towards Brahmn (unlimited mind or realized mind) and society that we create becomes less judgmental, more affectionate and more accomodating. This is the essence of Upanishadic thinking.

Are we, modern Indians, ready to expand our mind? Will we, like Ram, also take hijras and queer folk into our Ayodhya? This is not about being liberal. It is really about being human.

Devdutt Pattanaik is a renowned author, mythologist, and leadership consultant, whose work focuses on deriving management insights from mythology to reveal a very Indian approach to modern business. He has authored over 30 books, many of them best-sellers like Myth = Mithya, Business Sutra, The Pregnant King, and Jaya: An illustrated retelling of the Mahabharata