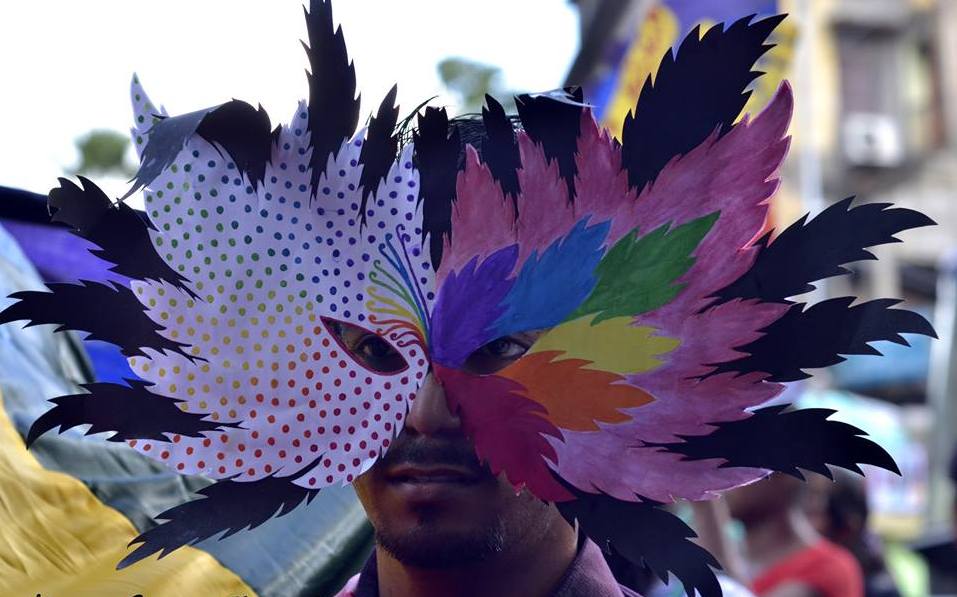 Hundreds of queers and supporters of LGBTQI community walked through the heart of Kolkata on a rainy afternoon on 13th July on the occasion of the 13th Rainbow Pride Walk, the oldest in the country held under the banner of Kolkata Rainbow Pride Walk (KRPW). The crowd gathered at Triangular Park, a noted junction in the heart of South Kolkata from where the march started at 3:30 PM. Despite half-an hour of heavy rain accompanied by intermittent short drizzles, the spirit of the crowd couldn’t be dampened.  Like previous years, there were people participating from several cities from around the nation and the globe this time as well. Volunteers had a tough time managing the huge crowd that passed through the junctions of Gariahat, Golpark, Dhakuria and Jodhpur Park. Earlier this Saturday, KRPW organisers had to modify the route of the pride walk when police requested the organizers to culminate the march at any suitable place other than the pre-decided Park Circus Ladies Park.

Rains lashed the city but could not dampen the spirit of the Annual Pride Walk in Kolkata.

Nevertheless, the crowd walked an equal long stretch towards Jodhpur Park. This year’s pride walk saw some impressive slogans and banners reflecting on the draconian Section 377 of IPC which criminalizes consensual same sex relations. Moreover, it advocated how a gender equality right, as granted this year by the Supreme Court’s NALSA judgement, can never be enjoyed without deserving the right for same-sex relationship. The slogans talked about homophobia, trans-phobia, violence, rape, marital rape and IPC Section 377. The crowd shouted, “Kaun sa Kanoon sabse battar, 377- 377” while slogans of same-sex love and relationships too reverberated through the air. The organizers of KRPW, which include a motley group of activists, individuals, organizations and trusts, left no stones unturned to make the pride walk a thumping success.

“Had it been a dry and sunny afternoon Kolkata Pride Walk would have left behind all previous records of queer participation the city has ever had,” said one of the organisers. He added. “We have faith and belief in Indian constitution and lawmakers in the capital that our voices and struggle will not go in vain.” Surprisingly, this year’s event saw more number of college going students and teenagers than ever before.The masks were rainbow coloured and the rainbow flag was held high throughout the walk. Organizers gave a count of around 1,200 or more participants this year, while being thankful for the assistance that Kolkata Police extended throughout the walk.