Fiction: Something to Hold On To (Part 1) 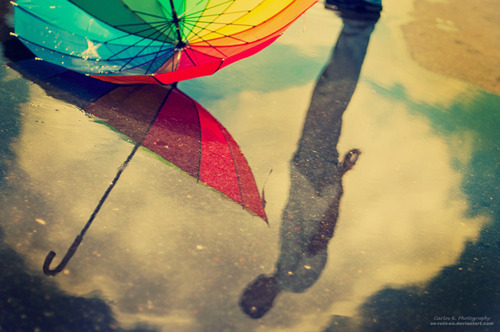 We met on a rainy night, just like tonight. I know it sounds clichéd, but that is exactly what happened.

It was around 3 am, and I was on my way home on my motorcycle when the city decided to give one of its famous rainstorms out of the blue. I had to find a place to park and hide from the torrential downpour; a bus stand appeared and I took it, parking and running under its meagre cover.

He was there already. I had fleetingly seen another bike parked near the stand, but had not focused on it much as I wanted to stay as dry as one can under such circumstances. I was in the process of unsnapping my helmet when he spoke.

“Hey.” His voice was deep, but audible above the rain drumming on the roof. I was startled, turning with helmet held like a weapon.

He laughed, but held up his hands as if to show me he was not a threat. A smile split his face. He was as soaked as I was. Our eyes fell to checking out each others’ bodies presented via soaked shirts and wet jeans. Our eyes returned to each other faces at the same time. And he smiled even wider.

“Hey,” I answered. I lowered my helmet to the stand bench and ran my hand through my hair. He was dressed in a light t-shirt and jeans and a backpack on his back. “Coming from work?” I asked.

He nodded. “You?” It sounded like a text conversation.

“Yeah.” I sat down beside my helmet. “But then this….” I gestured at the pouring rain.

He sat down beside me. “It’s a rainy, stormy night and you pass a bus stand in your car.” He spoke slowly, as if telling me a serious story. “You see three people inside: A sick old woman, a friend who once saved your life and the perfect partner you have been dreaming about. Who do you help?”

But it seemed to be the right answer because he leaned closer to me and whispered in my ear, “Both.”

The rain is slashing viciously at the hospital window, the world outside dark and chilly, the world inside dim and smelling like medicine, unwashed bodies and wet ceiling tiles. They are operating on him. They had rushed him from the ambulance to the operating table like we see in hospital shows.

I am covered in his blood. Everyone is avoiding me.

I will die without him. When did it come to this? When did he become as important to me as my own life?

After that night, when the rain had stopped and we had both gone our ways, I figured I would never see him again. We had exchanged business cards. His was a handsome ivory colored note, declaring him to be John. He worked for an IT company. Like I did. Like many of us do. I never really saw him clearly in the rainy darkness, but he was charismatic. Nearly all of us have met people to whom we feel an instant attraction. That was how I felt about John. Those few minutes that we shared under that bus stand had been electric.

But that was a few minutes in a rainy night. Life established itself soon after. His deep voice still lingered in the back of my mind, but customers and cases and late nights were in the front of my mind.

It was early Saturday morning a week later as I was leaving the office, that I got his call on my mobile. I was in the office parking garage putting my helmet on when the phone rang, a number I didn’t recognize. I answered it impatiently, wanting to be getting home to start my weekend.

The voice on the other end of the line was deep and full of that smile and brought back the smell of rain and queen of the night. He was outside my business park. Did I want to go some place and talk?

John knew a tea stall near a bench where we could sip tea and look at the stars and talk. And that’s what we did. Our second date (John always insisted that the rainy night under the bus stand was our first date) was spent over hot tea, the cool breeze in the African tulip tree, the occasional honk of a cab plying people home in the wee hours, and his slow, deep voice.

He made me laugh. Me. Serious, overworked, constantly worrying me. Laughing. His body was a warm glow beside me. Had he asked, I would have gone home with him in a heartbeat. But he didn’t ask. He said that was for another date.

They have been operating on him for over two hours. I don’t know exactly how bad things were because it was dark and wet. Like the night we met. Only this time, we decided to ride out the storm. This time, a lorry with no headlights turned a curve in the road into a bowling alley, and we were the pins.

A nurse comes up to me, asking me to change clothes. She thrusts a set of doctor’s scrubs into my hands. She says she knows I am worried, but I am scaring the other people waiting.

I see a few other waiting people: Their eyes are red and raw like mine must be. They also saw their loved ones vanish into the swinging doors of the operating wing. They stare at me like I am the new enemy and not the accidents and disease that harmed their loved ones.

I take the scrubs and go to the nearest bathroom. The window is open, and I can hear the rain, still falling like a waterfall. Just like the night we met. Why hadn’t we just waited it out under a bus stand?

After that night, John and I met at least three times a week for as many months. Always outside somewhere…a park, a restaurant, a tea stall he knew of. By now he knew that my family didn’t know I was gay. By now I knew he lived alone, his family in another part of the country. We had finally seen each other under light – in restaurants, in the sunshine on a Saturday afternoon in some park.

He was tall and thin, but broad-chested. He was three years older than me, but already had laugh lines around his eyes. They lit up his face whenever he smiled, which was often. He had dark skin, and his arms were covered with thick, black hair. Even his head hair was thick and loosely curled except for a spot about the size of the top of a tea cup where he was starting to go bald, right on the top of his head. He was clean-shaven. His eyes were a rich brown, large and covered by long lashes when he closed them. He was infinitely alluring without uttering a word: when he spoke in that slow, deep voice, I felt myself falling for him like I had never fallen for anyone in my life.

What he saw in me, I didn’t know. I was an ordinary looking 25 year old IT professional. I was of average height, thin, with wheat colored skin, with straight, short black hair above a serious face. My eyes were brown and often pensive. I worried about everything, and this showed on my face, in my posture, in my gestures and the careful way I spoke. He sometimes teased and said he would not call me by my name, Sachin; rather, he wanted to call me ‘Professor’. He said he never saw a guy my age worry so much.

But I didn’t understand how he couldn’t worry. He was alone in a city that was far from his native. Everyone he had ever known his whole life was thousands of kilometres away. My parents and my younger sister and I were not close – in fact, they didn’t know me much at all. But the thought of living without them, their familiarity and security, was hard for me. How did he do it, I asked John.

He was silent for a few minutes and then answered, “We all need something to hold on to in life.”

“Like sunrises and the wind in the trees, like good books and those moments you see between lovers that others miss because they are walking by too fast.” He was looking at me intently. In my mind, I imagined this as a movie scene, only with two heroes and no heroine. He reached out with one of his long fingered hands and curled it around my arm. “Like holding on to you.” His voice was just above a whisper, somehow still audible in the clatter of the coffee shop where we sat.

His words gave me the jolt he probably intended, though knowing John, he meant every word. Even as a part of me thrilled to be thought of that way, another part worried. I was falling in love with someone my family, my society, my country wouldn’t approve of.

They have been operating now for over three hours. I have discarded my blood stained clothes for the green scrubs and sit alone in the waiting room. The other families have left, either in tears or in relief. I feel neither emotion yet: I won’t know until I see him just how I should feel. For now, I am simply terrified.