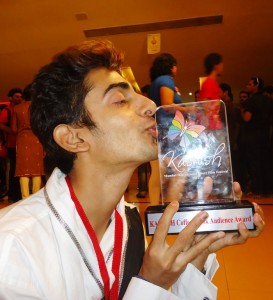 Winner of the People’s Choice Award in Kashish for his movie Logging Out, Nakshatra says he is yet to Log Out from movie making

When the short movie Logging Out was released on Youtube in March, Gaylaxy wrote how the movie touches a chord inside of you and sends you down the memory lane. That Logging Out will in fact remain “logged in” over the next couple of months and win an award at India’s biggest queer film festival was no one’s guess. A thin, young but energetic boy, Nakshatra could best be described by his second name on Facebook – “still childish”. Born and brought up in Mumbai, Nakshatra is a student of Mass Media and an active part of the gay community in the city. Ask him to describe himself, and he chirps in happily, “I am a full time happening human being and living a wonderful ‘Queery Life’.”

Directing a movie was his childhood dream and Nakshatra had been experimenting with video editing for some time, making videos of the places he would visit with his family and posting them online. “Since school days, I used to say to my Mom: ‘I’ll direct a movie in future, which will be a hit.’ She didn’t take it seriously. Finally I proved myself and now she is happy and proud of her son for winning this international award,” he tells proudly. But Logging Out wasn’t something he had planned over the years and as he says, “it all happened out of the blue,” on one sleepless night when the idea came to his mind. “I have seen many of my best friends falling for people online, whom they haven’t even met. So I decided to throw some light on the issue with a concept which people could relate to.” And that people had no difficulty relating to the concept can be gauged from the fact that he went on to win the People’s Choice Award at Kashish this year, which was given based on online voting. Calling the movie as a “gay themed short film based on online reality where people give importance to your skin rather than your emotions,” Nakshatra describes the plot, “Like almost all teenagers, the lead character of my film, who belongs to an orthodox Indian family, is trying his luck to find the love of his life through social network but then there is always a hard realization that ‘love is not so easy to get.’”

Ask him about his Kashish Journey and his eyes light up instantly. “I still remember one fine evening; I was baking pizzas and received a call from an unknown number. The gentleman on the call praised my efforts for ‘Logging Out’ and sought my consent to screen the movie at his film festival. I discovered that gentleman was Sridhar Rangayan, festival director of Kashish. I said yes! Later it was also accepted in Kashish Coffee Break Online Contest, as it was already a hit online.” And that was just the beginning of Nakshatra’s success and his tryst with celebrities, for the movie not only went on to win the Coffee Break Online Contest for which he received the award from none other than Oscar Award winner Rusel Pookutty himself, but it impressed actor Anupam Kher so much that he pledged his support for Kashish and was later screened at Queens Museum of Arts, New York too. The memory of that special moment is still fresh in his mind and he happily shares those moments, “Mr. Anupam Kher was present during the closing ceremony as well as when I gave my winning speech and Logging Out got screened for the second time in Kashish. Later, when he went on stage, he praised my short film as he liked the overall effort and that too with zero budget. When he announced his sponsorship of Rs. 50,000/- from next year for Kashish, I was so happy for Kashish and for our community’s growth rather than my film getting appreciation at such a big level. Things are getting bigger and I am happy that somehow I am responsible for that!”

So did the sudden fame bring about a change in him? Not the least bit, is what he says. In fact, he made it a point to still be grounded and come back to his friends even during Kashish. “When I used to go to stage, special sitting zone, official photo-shots, I had to sit away from my buddies at Kashish’s venue and they thought I’ll change with such celeb treatment. But after every single session I used to run to them and hugged them with all my love as it was their success too. Their expressions were saying that ‘Natty is still the same, hasn’t changed.’ At the end of the day I was happy because I was still the same and was being me.” And he doesn’t forget to mention the other protagonist Ved either, without whom he says the film wouldn’t have been completed.

Having already earned the tag of ‘the youngest filmmaker in Kashish’s history’, this young filmmaker has plans for more and says his future projects are also going to be LGBTQIH themed. “I just want to make films which will give something good to our community for its welfare,” he says. His next movie is already complete and is a gay love story titled ‘Book of Love’ and will be released on 15th August. And this is just the beginning of a promising future. As he says, “You will see me soon because I haven’t yet Logged Out.”