This Flirtatious Moment Between Daenerys and Yara in Game of Thrones is Driving Everyone Nuts!

With each new episode, Game of Thrones is raising the stakes, prepping us for the eventual battle between Fire and Ice. But each new episode also allows us to ship our favourite characters. While speculations of Jon and Dany eventually falling in love are rife in the fandom, I couldn’t help but grin when Yara, the possible future queen of the Iron Islands and a bad-ass lover of other women, flirts rather unabashedly with the Mother of Dragons in the show’s latest (and arguably the best) episode.

“I never demand but I am up for anything really.” Oh snap!

In an episode that is already packed neck-deep with intense action, this still happened to bring a lot of joy to viewers, several of whom are now officially shipping the two ladies. 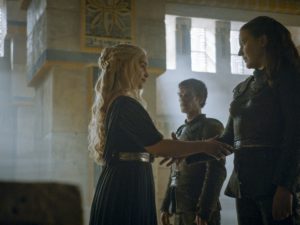 Dany does a double take as a smile spreads across her face, admiring in her head (I guess) the sheer ballsy behaviour Yara exhibits. In many ways, it reminds hero of her own fierce self, the Khaleesi who is out to rule the Seven Kingdoms.

And if along the way, some fun is to be had between Yara and Dany, then who are we to complain. #QueenShip for the win!

The best part is that the cast members have themselves confessed that there is something lingering between the two women when they exchange dialogues. You can watch the behind-the-scene footage here:

“Get rid of Daario, bring on the ladies. Why not!”