An Androgynous Fashion Show in Jaipur 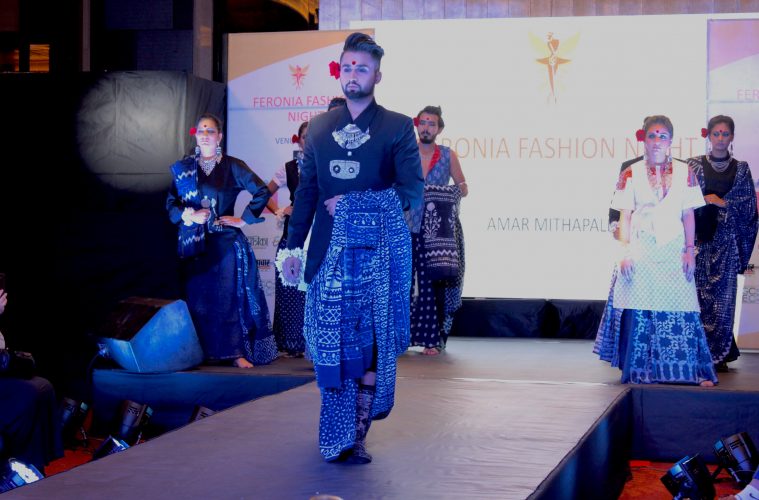 The inaugural edition of Feronia Fashion Night was held on December 1, 2018 at Radisson Blu, Jaipur. The event was organized by Redo Times Pvt Limited, a fashion discovery portal that incorporates the third gender and provides them a complete package for fashion styling and media.

The Event was conducted with a motive to raise awareness regarding the inclusion of the LGBTQ community into the mainstream society, and the message was widely spread with splendid collections showcased by four globally renowned designers: Mr Amar Mithapalli, Mr Anurag Manju Gupta, Mr Padma Raj Keshri from India and Mr Hoshigoru William from Indonesia.

Designer and educator Amar Mithapalli is renowned for his fashion critiquing in the fashion circles of Mumbai and Pune. His collection Vilay comprised of Indigo Sarees with a twist of Aari. An Intricate essence of design, the male models wore saree with Nude makeup to complete the look and depicted androgynous fashion which aims to avoid gender stereotyping.

A renowned designer and a Lakme regular Anurag Manju Gupta from New Delhi, owns the Label Anurag Gupta. The identity of his label is to make every detail functional, with unique embroidery. He represented his power of clothing through transformative quality in women’s wear.His collection Metamorphosis was inspired from the MC Escher’s day and night artwork where transition of space was divided in black and white and the difference between negative and positive space was neutralized. 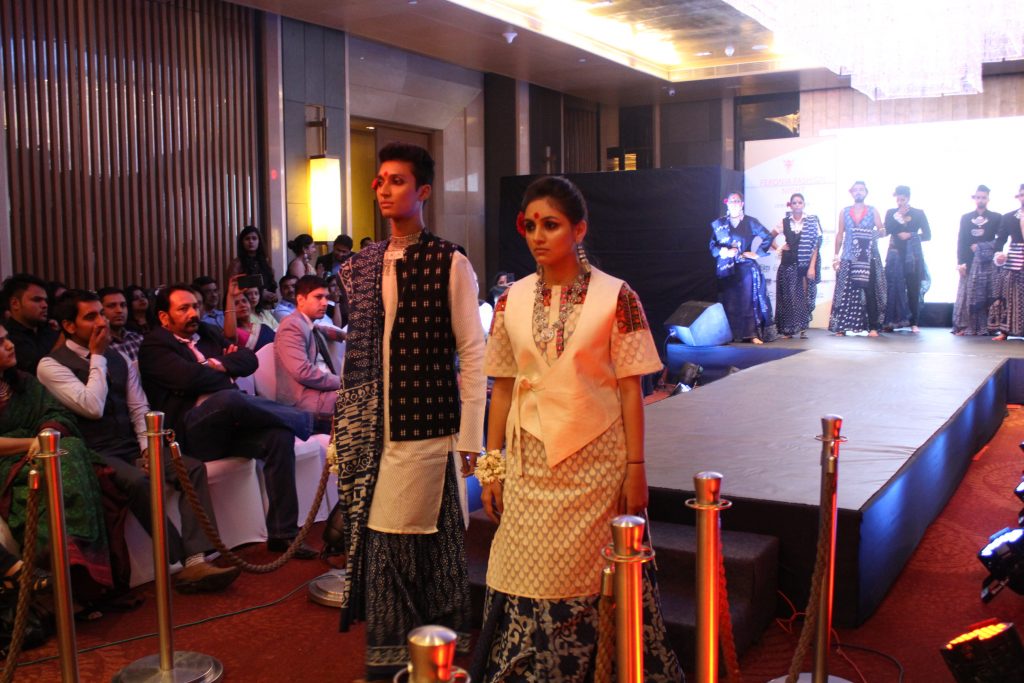 A young Lakme Gen Next designer Padma Raj Keshri from Ahmedabad is well known in the textile industry for bringing contemporary designs, exploring new craft clusters, working with artisans on field and bringing the new ideas from its origin.His collection symbolised modern look with boxy silhouettes, inspired by Zen precept where organic modernity was the key element.The silhouettes were modern and organic in nature for which the fabric was woven from cotton by artisans in Ahmedabad. 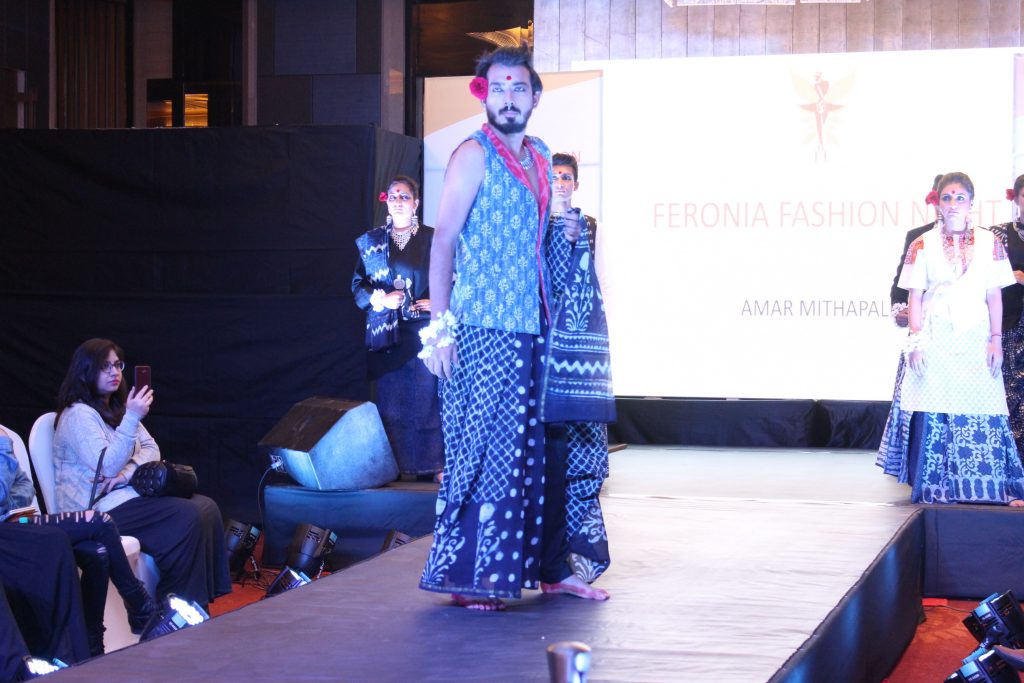 Indonesian Designer Hoshigoru William also presented his mesmerizing collection at the event. His Resort wear collection Metamorphosis Bali wasinspired from magical effect of strip lines that create water/white shadow effect by creating movement in the eyes of the viewer.The collection was a collide between traditional handcrafted to the minimalist cut ready to wear. 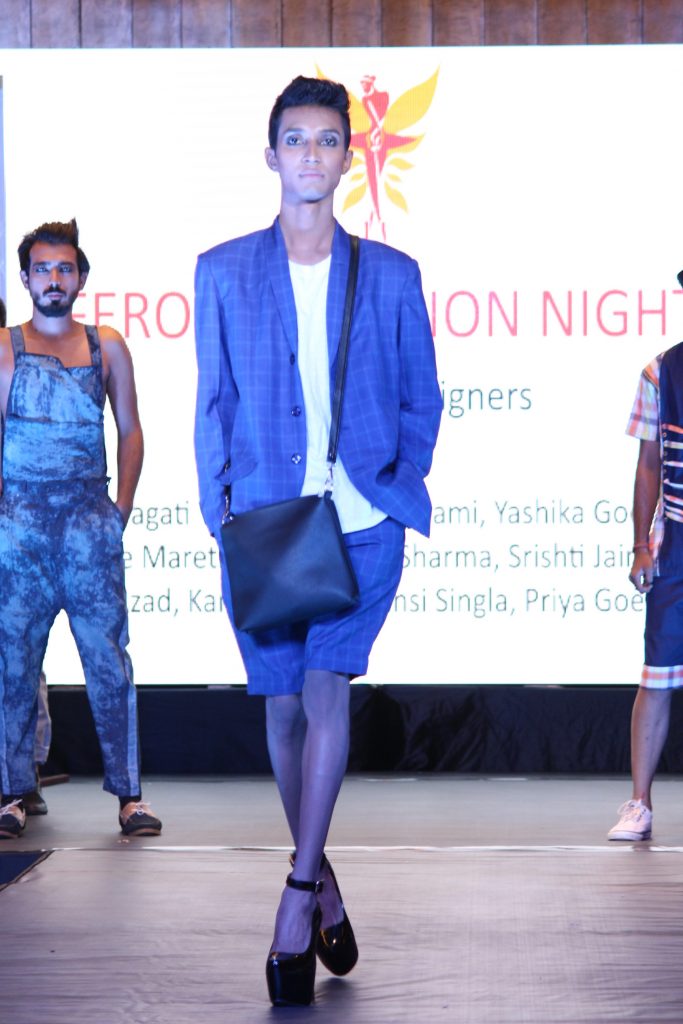 Leading transgender rights activist Ms Gauri Sawant attended the event as Chief Guest. She was glad to be a part of Feronia Fashion Night, as the platform conveyed a very relevant message of gender equality and inclusivity of the marginalized gender in the mainstream society. She told the audience about her journey requesting them to be generous towards the LGBTQ community by treating them equally with an underlined message of “Humanity above all.” 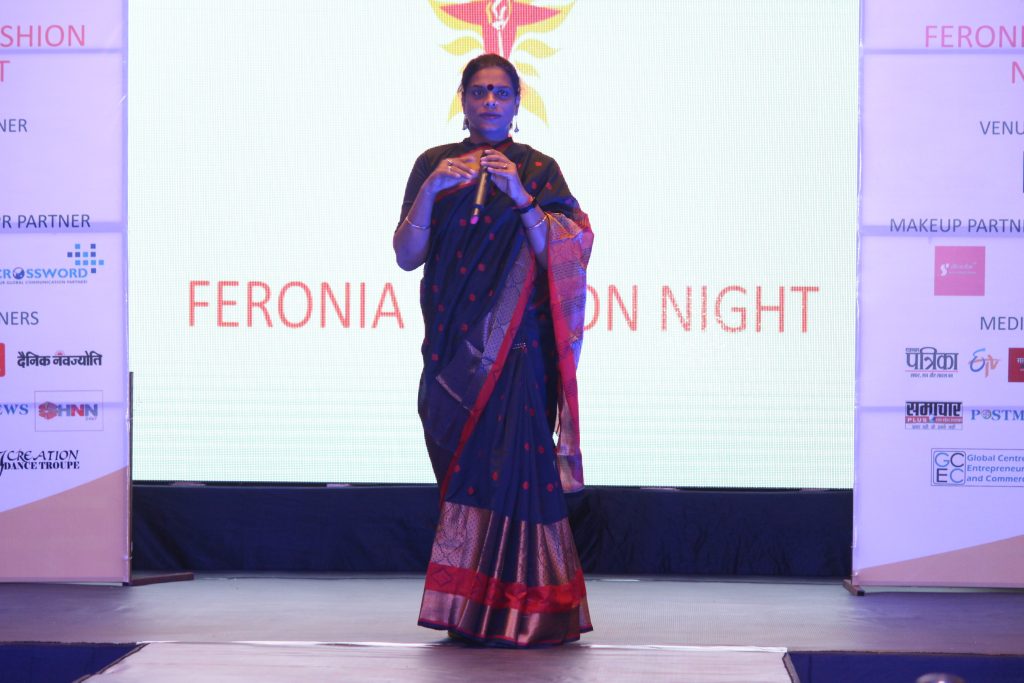 Feronia Gen Next participants also showcased their outstanding collection and got the opportunity to showcase their work to Indian, International designers, media and Audience.

Mr Paresh Gupta the brand ambassador of Rajasthan state government was the guest of honour for the evening; he was elated to be the part of Feronia Fashion Night and appreciated the efforts put up by Team Feronia for the event while expressing the desire to be a part of future events.

Ms Disha Dwivedi , Styling Manager of Redo Times Pvt, spoke about the upcoming ios application that has taken a giant step towards gender neutrality by providing styling options to the third gender. She expressed the explicit desire of the company to organise such events in different parts of the country.