3 Simple Ways You can be an Ally

With the slow yet consistent change in people’s mindsets, many are willing to come forward as an ally to the LGBT+ community. While attending annual pride marches or getting involved in activism in your pass-time do count as legitimate support, being an ally, in its truest sense, is beyond a one-day or a one-off job. An ally, after all, has to actively be there for LGBT+ people each day of the year, taking significant steps, no matter how small they may be, to create an inclusive environment at the workplace and at home.

But Why Should I Become an Ally?

We already know the way LGBT+ people face discrimination, unfair treatment and the feeling of being left out. Be it at a social gathering, workplaces, universities or even at home. Worse, they are also made fun of and made to feel guilty for who they are. The reason? Their sexual orientation, which doesn’t fit in with what society terms as “normal”.

To bring an end to this everyday misery affecting their personal and professional life; allies are critical. Allies, belonging to a majority population, can work together to build welcoming, safe and inclusive places. A society that accepts, respects and treats every individual equally, regardless of their sexuality, colour or race. Allies can play a huge role in instilling the confidence and safety net throughout the coming-out process. And sensitising people around the topic to end the ignorance that has been prevailing for decades.

Allyship is vital if we want our society to be a happy, secure and prosperous place to live in for future generations.

Makes sense? We see you nodding in response!

But what can I do to be an ally?

Being an ally is not rocket science requiring you to put in hours into research and preparations. You can be an amazing ally by being your best supportive self.

To break it down even more, we’ve listed a few ways for you to start.

3 Simple Ways You Can be an Ally

The most underrated yet the best way to support someone is by listening to what they have to say. And that is an ideal way to start as an ally.

Just lend your ear to your LGBT+ colleagues and friends when they speak their hearts out to you. Be it about the challenges they are going through, their thoughts and feelings or anything in general. Listen with an open mind and empathetic heart. The way you would with your straight friend or colleague. Without interrupting them. Without questioning the validation of those feelings. If you don’t listen, give a bizarre & orthodox reaction or fall completely silent, it would turn into a one-sided conversation, prompting the LGBT+ person to go back into their shell.

Listening is the first step to affirming your support. It helps understand what runs under the water, letting you gauge the ways you can help them.

Speak up for their rights

More often than not, it becomes difficult for LGBT+ people to speak for themselves as they are outnumbered by the majority. It can be a sentence, such as “don’t act so gay” to a wrong pronoun or cold vibes. Things may get real awkward as well as disturbing. That’s where you, as an ally, needs to stand up and take the responsibility to speak up for them.

Whenever you notice someone at work, college, school or home crossing the line, stop and correct them. Let them know that their actions or words are wrong and unacceptable. That’s an important way to break the cycle. To make people aware and mindful of the way they behave in future. You saying the right thing will encourage others, too, to speak up, breaking more barriers while making the space more inclusive.

Let your empathetic self come out

The third step is to be your genuine, honest self with your LGBT+ friends, relatives and colleagues. Be open about something that you don’t know. Accept your flaws. Actively express that you intend to care and improve your knowledge about the ways you can extend support.

However, don’t simply utter “I support you” every day. (That would be super annoying, to say the least!) Be mindfully empathetic. That would give those essential positive vibes, letting them know they can count on you.

Apart from these three basic steps, there is a lot more you could do along the journey of allyship. For instance, educate yourself consistently on the matter concerning the community, create a strong network of allies, and learn to put your privileges to good use. Also, learn to apologise whenever you make a blunder (you would often, as no one is perfect). It’s all about owning up to it.

Allies are everywhere, you just need to identify them. From offices and colleges to schools and public spaces. And it should be that way as every place needs inclusion. You could learn a great deal from your fellow allies, supportive blogs and books.

Now that you’ve got sufficient knowledge, would you care to become an ally? We’re curious.

You can read Ally stories in the recently published book EQUALLY: Stories By FRIENDS Of the Queer World, Published by Rupa, the first of its kind anthology put together by Pride Circle that was released on 9 April 2021. It contains 45 stories of everyday unsung allies making the world a bit more welcoming for the LGBT+ community every single day. 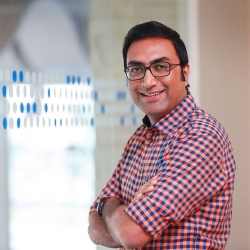 Srini Ramaswamy
Srini Ramaswamy is a certified diversity professional who over two decades has transformed the culture of Fortune 500 companies. He is an evangelist, advocate, and ally who has received global accolades for going the extra mile to advance LGBT+ equality at workplaces and beyond.