Coming Out as an LGBT Muslim

According to a Gay Quranic Facilitator, within the Quran, the holy book of Islam, there are 114 chapters, 6,236 verses, 77,943 words and 323,620 letters.
I asked him how many mention homosexuality, homosexual acts or same sex Love? And the answer: 0. Zilch. Zero. Nada. NONE!

I have been an activist for most of my life. As soon as I realised I was different to other boys, I tried to be active in not wanting to be found out. I hid myself from those who questioned or those who scorned me. I had to because I came from a Muslim family which tried to create a life for me which just wasn’t to be. I wanted to be a Good Muslim boy and follow my parents’ expectations and aspirations of me.

And to have a successful career, whatever that may be but ideally one which provides financial stability and fantastic opportunities to make it lucrative enough to build a large home, marry a person of the opposite sex and have children. Familiar cultural traits which are not only known within the Muslim household but in many South Asian families regardless of faith.

I come from a large family, and being the youngest, I had to carry the pressure to conform more than my siblings. After all, I was brought up to respect my elders and seeing that they all had their turns to rebel against my parents, I was the one who was more like the “runt of the family”. I didn’t fit in with my alpha male brothers and neither did I quite fit in with the females within the household, even though I loved spending time with them in the gender expected roles created for them by a patriarchal society.

I used to pray and attend the mosque, but being of an inquisitive nature, when I asked what the words I was reading meant, I was told to shut up and sit down. I wasn’t provided with any answers. We appeared to be learning by rote.

I observed Ramadan and knew that we were supposed to simulate the experience of those in need and who were really experiencing starvation across the world and opened the fast with a huge feast at the end of the day in gratitude. But I also knew my loyalty to the Islamic faith was being tested and at times, I felt like a fraud because nobody would inform me as to what it all meant and I was just going through motions.

It was only when I moved to London, aged 19, that I soon began to question myself and my faith. I was beginning to develop a better understanding of who I was and what I was about to become. I was isolated, depressed and socially awkward. I learnt to place barriers between myself and others. I realise now it was because I was trying to come to terms with my sexual orientation and I couldn’t face up to being a gay young man. My coming out experience was at a time when the HIV/AIDS CRISIS was at a peak, Section 28 which banned the promotion of “any form of homosexuality” was in full force and coming from a relatively religious background (my father was a founder member of Birmingham Central Mosque) not only created religious guilt in my mind, but made me feel that I couldn’t be as expressive as I had liked or even to be sexually active would have negative consequences — to face the threat of HIV, be ostracized by the family and community if they ever found out I was gay or face eternal hell, damnation and fire, as taught to me by my elders and religious leaders. It all instilled a sense of fear and my mental health suffered.

So, the inner struggles or internalised homophobia I felt led me to contemplating suicide. It was only the thought of my religion teaching me suicide was a sin and how I would leave my mother, did I think twice. Not only that but the sound of the police siren blaring its siren as it weaved its way through the park, which brought me back from the brink of suicidal ideation.

The cultural complexities of family, religion and faith did not allow me to navigate a linear life or lifestyle.

As a student, my sister had included the Quran and the bible in my reading materials. For me to learn about myself and homosexuality, I had to read what the holy scriptures said. I read the books, page to page, back to back and cross referenced. I was looking for answers and couldn’t find anything. I read the parables, the context, subtext, nuances, the themes, and appreciated the guidance it offered. It provided me with a moral compass but not anything about being gay.

My life “choices” were heaving with anxiety, implications and consequences.

However, I realised it was not a sin to be gay. If it was, I thought to myself, let Allah deal with me when my life is over.

I read the Story of Lot time and time again. It’s mentioned in both the holy scriptures. It wasn’t making sense. Why would God or Allah destroy a whole town or city including women and children if the menfolk were homosexual? If we were to look at the issues and themes, the mortal men desired Angels in the guise of men and there were other issues at play too — control, rape, promiscuity, incest, consent, tests of faith and loyalty to Allah or God, idolatry and worship of deities, and intoxication, amongst other themes, which had no bearings on being gay itself.

The parables drew me in, in the same way as Shakespeare, Lewis Carroll and other phantasmagorical authors.

I learnt that Allah wanted me, as a human, to be kind, compassionate, generous and loving toward my fellow beings, animals and nature. Yes, there is violence within the scripture but history is never free from violence. I placed the books in the context they were set and I gleaned what was necessary. I learnt I had to be myself in order to survive, and that knowledge is key. I had to know and accept myself before I started to share with others. It took me a long while and I didn’t inform my mother until after I had met my partner through a mutual acquaintance.

Her reaction was more positive than I had anticipated and in her acceptance of me, she proved to be more to the faith than any Muslim practitioner, leader or scholar. She showed me unconditional love, compassion and acceptance.

I told my father about a year later. He was more intolerant and his rage was full of homophobic rhetoric. He was more concerned about what his peers, the extended family and community would think, especially those from the mosque.

I chose to step away from the family home and about a year later, my father phoned and asked me to return home. I was expecting more negative reactions but instead he embraced me.

He offered re-assurances in his way and added “the Quran has a lot to teach people, some good and some bad. We will only know what becomes of us all when we reach the Day of Judgement.” My father continued, “we have all sinned and for those who have not sinned to “cast the first stone”.

My father was showing signs of being a man with foresight.

He showed me levels of acceptance I never knew he could and he strove to protect me from harm. As an elderly Muslim man and a scholar, he shared his pride in me for what I had achieved and encouraged me to be the best at what I do. He urged me to use my voice and challenge social injustices. He impressed me to fight for what I believe in.

To this end, in 2014, I foundedBirmingham South Asians LGBT — Finding A Voice.Birmingham’s first non-funded, independent, multi faith South Asian social/support group for South Asians men and women aged 18+. We share our stories and personal experiences. I hear stories from young British Asians, predominantly Muslims, who daren’t come out to their families, students from overseas who undergo conversion therapies, Muslim Asylum seekers who are fleeing their countries due to their sexual orientation and may face execution or being ostracised from their families or communities. 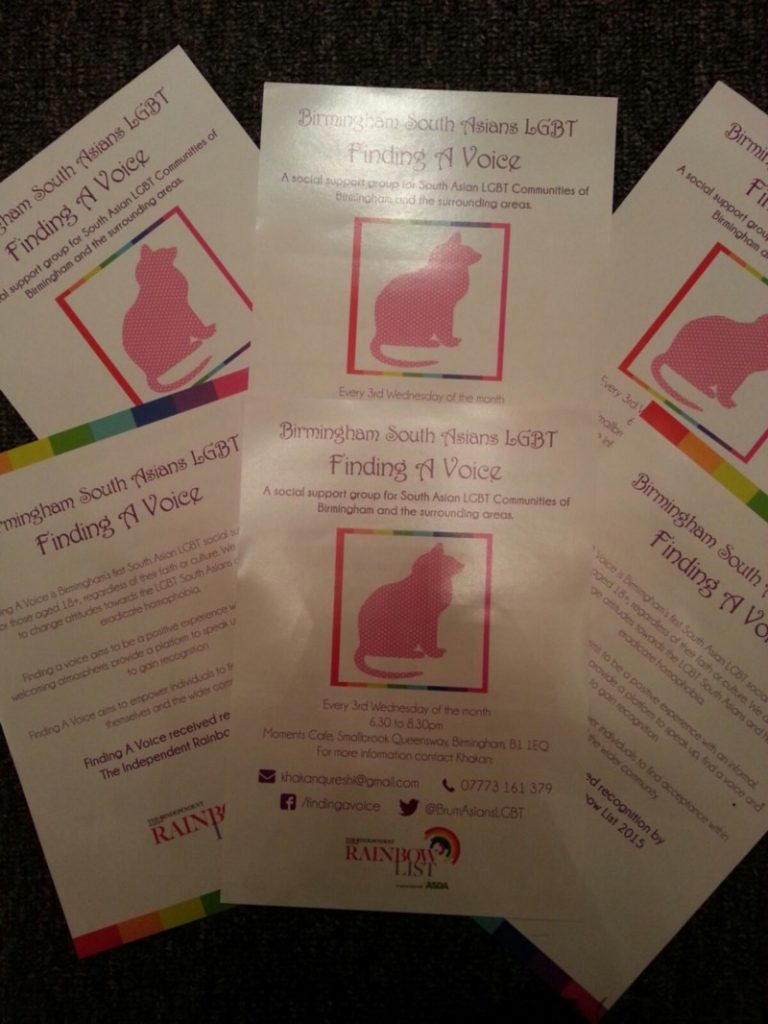 I hear stories of young LGBT Muslims experiencing Islamophobia when they try to access LGBTQI+ Venues and bars, I share my own episodes of dual discrimination when being the only brown face in a white space. I write about homophobia within the South Asian community and challenge the attitudes and mind-sets of a generation of people who can really make a difference. 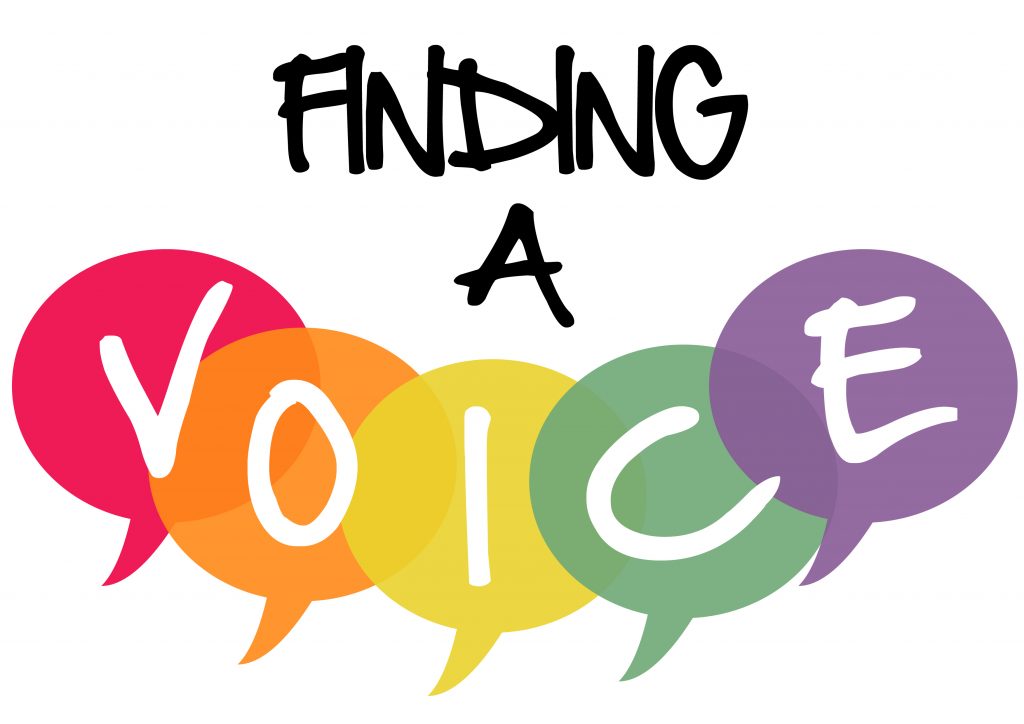 In the past 12 months, I have challenged several Imams and asked if they can offer advice, guidance and information to an individual who is struggling with coming to terms with his, her or their own sexual orientation or questioning it, can they stand in front of a congregation and say it’s okay to be LGBT? The answer has been a resounding NO because the South Asian community is not ready for it. I asked when will the community be ready for it and I have been met with a wall of silence.

I have challenged media sources who tend to reinforce negative stereotypes of being LGBT+ and when I say one can be LGBT+ and reconcile it with faith, it is a story they do not want to hear because it provides a positive role model story and goes against the narrative they have chosen to portray repeatedly. They collude in the censorship of our voices, especially those who do not fit in with the assumed stereotype of being a Muslim or Gay.

I’m not allowed to be one AND the other. I have been given silent choices, a social contract which not only tries to disable me and alienate me, but one which says I shouldn’t exist.

But I say, we being LGBT+ and with faith, are a force to reckon with and that’s when I choose to say I am with my white British partner, aged 68 of nearly 26 years, who is C of E and has the bible in his bedside drawer and I have the Quran on my side.

And together, we do exist, we are recognised and accepted within our local community and we will find our voices!

This post was first published in Reaching Out, apublication dedicated to gathering LGBTQ stories from people of all faiths,and has been published here with permission

Khakan Qureshi
Khakan Qureshi is an LGBT Activist, Writer and Speaker. He is the Founder of Birmingham South Asians LGBT - Finding A Voice, Birminghams first independent, multi-faith, non-funded social and support group for South Asian LGBT men and women aged 18+. Comfortable to be himself, identifying as a gay man, in an interracial, intergenerational & interfaith relationship, he has challenged stereotypes and overcamethe dual discrimination of both homophobia and Islamophobia. He highlights the existence of LGBT Muslims and raise awareness in a "creative way"
Latest posts by Khakan Qureshi (see all)