Why the repeal of Section 377A by Singaporean Parliament is not inclusive as it seems?

On 29th November, 2022 the Parliament of Singapore replead Section 377A which criminalised same-sex relationships between two consenting male adults. Similar to Section 377 of India Penal Code, Section 377A of Singapore Penal Code was enacted by colonial government, informed by Victorian morality, Judeo-Christian beliefs, puritanical understanding of relationships British imperial forces left a punitive legacy of sexual governance in erstwhile colonialised nations. Notions of imperial governance are deeply entrenched in the minds of ‘postcolonial natives’ who still cling to imperial standards of society claiming those ideas constitute the very fabric of their ‘national identity’ and was lost due to foreign invasions and/or interventions.

Section 377A was inserted into the Singapore Penal Code in 1938 to criminalise all other non-penetrative sexual acts. Unlike Section 377 of IPC, it does not talk about ‘unnatural offences’ but of ‘gross indecency’.  Section 377A of SPC states that

Though rarely enforced it created a ‘moral order of blackmail’ continuously used by state authorities and society to police the behaviour of LGBTQI+ Singaporeans. The law created a system of dual citizenry in the Singapore which rewards heteronormative family structures over other structures of relationships and families.

During the parliamentary debate on repealing the section 377A Home Affairs Minister K. Shanmugam said: “To a gay person, even if Section 377A is not enforced, it is there – memorialised in law – a sword hanging over his head, a daily reminder that every time he engages in private sexual activities behind closed doors, in the sanctity of his bedroom, he is nevertheless a criminal.”

On the surface though, the actions of Singaporean Parliament seem to be upholding the values of a democratically inclusive society. However, analysing it through queer lens provides new insights on how queer citizenship is being framed by the Singaporean government. The repeal of Section 377A is also followed by a constitutional amendment which defines and enshrined marriage as a union between a man and woman, thereby protecting it from any constitutional challenges in courts. In defence of the amendment Minister K. Shanmugam said, “We will try and maintain a balance…to uphold a stable society with traditional, heterosexual family values, but with space for homosexuals to live their lives and contribute to society.”

The remarks by Home Minister set the tone and limit on the inclusion of LGBTQI+ Singaporeans. He reiterated that his government is committed to uphold the so-called traditional family system. The constitutional amendment on marriage has led to the formulation of asymmetrical citizenships. One for heterosexual Singaporeans whose rights to form families will be actively protected both from the states’ encroachment and from ‘deviant’ others who are categorised as secondary citizens – allowed to live peacefully only if they do not challenge or question the hegemony of hierarchial and traditional institutions.

Parliamentary debates clearly reveal the anxiety of political class which fears that decriminalising same-sex relationships should not become a stepping stone upon which other rights might be demanded by LGBTQI+ Singaporeans in future, especially the right to marry and adopt children. Leader of Opposition Pritam Singh on repealing 377A and family said, “My personal belief is that the repeal of 377A does not in anywhere signal the state’s hostility towards the family unit, or religious freedom. Rest assured the family remains, and I dare say will always be at the core of our social norms”. He further said that, “What the repeal of 377A certainly does not signal is Singapore becoming a more liberal or permissive society. What it does is make room in our shared public space for members of our common Singaporean family to not be discriminated against due to their sexual orientation.”

Singaporean MPs cautions the general heterosexual citizens that this action does not constitute of Singapore becoming a ‘liberal and/or western’ society. However, one fails to acknowledge that terms like ‘husband’ and ‘wife’ are socially constructed and loaded with political connotations. To be a husband traditionally means to be the breadwinner who goes out to work and to earn, and therefore to be in control of the property and the resources. To be a wife, conversely, implies being a homemaker, giving birth to children and raising them, not having an income and property of one’s own, and not being paid for housework that is seen as a wifely duty. These watertight gender division that characterizes the words ‘husband’ and ‘wife’ breeds patriarchy.

Some MPs even go a step further in renouncing marriage rights to LGBTQI+ Singaporeans by equating LGBTQ activism with militancy and called pride parades as a propagandist scheme to spread ‘gay-themed’ projects. MP Lim Biow Chuan said, “Because of this small minority of militant homosexuals, they give the others a bad name by being bullies and by being difficult in their conduct.” The MP turns the argument on its head and claimed that ‘normal’ Singaporeans are bullied by  militant gays who force them to adhere to their ‘lifestyle’ views. He said (Singaporeans) “are harassed in their workplace if they do not support the gay beliefs, or if they refuse to attend a pride event, thus it seems that there is reversal of role. It is not the gays who are being discriminated in Singapore. On the contrary, if you do not agree with the pro-gay movement, you may be penalized at work or face discrimination. And likewise for students studying in international schools, they are asked to take part in gay-themed projects as if it was part and parcel of the school curriculum”.

In his speech during the debate MP Lim Biow Chuan calls LGBTQI+ Singaporeans to be respectable in their conduct. Such rhetoric has become a part and parcel of LGBTQ activism both globally and nationally. Members of LGBTQI+ community follows the notion of respectable politics in order to assert that they are similar to their straight counterparts. Evelyn Brooks Higginbotham in 1993 coined the term ‘politics of respectability’. She argues respectability politics refers to attempts by marginalised groups to police their own members & show their social values as being continuous with dominant values rather than challenging it.

In recent years, LGBTQ groups consciously chose to present same-gender relationships as just like respectable straight ones. For instance, emphasising on commitment and other shared values and to refer to queer relationships as ‘long-term, lifelong, stable permanent’. In order to recognise queer relationships as equally valid and legitimate there is an attempt to distance from ‘vulgar’ and ‘promiscuous’ aspects of queer life like BDSM, Leather culture, kinks and other life celebrations which might cause uneasiness for respectable straight citizens Increasingly, Pride parades have also fallen prey to respectable censorship which limits participants from expressing political opinions which might challenge ruling political regimes. For examples many pride parades in India asked participants not to raise slogans or banners against Citizenship Amendment Act, 2019 or to dress in an ‘appropriate manner’.

Respectable politics defeats queer project as a resistance to norms and embracing radical existence. Such groups perpetuate the idea of normativity by substituting homonormativity for heteronormativity, and, correspondingly, ‘heterophobia’ and misogyny for homophobia. Normativity of any type does nothing to dismantle the status quo; it is only through a destabilising of normativity that revolutionary change can occur.

The Pink Dot SG – the largest LGBTQI+ organisation in Singapore – in its statement on the repeal of Section 377A urged the government to take concrete steps to ensure access to housing and mental healthcare as well as protection from workplace discrimination and bullying in schools. It also called out the homophobic and fear mongering speeches of MPs who pitted LGBTQI+ rights against family values and religious freedoms and how these narratives are used to justify continued discrimination of LGBTQI+ Singaporeans in areas beyond Section 377A.

The repealing of Section 377A and constitutional amendment on marriage constitutes the position of LGBTQI+ individuals in the democratic project of Singapore. Singapore being a multi-ethnic, multi-religious and multi-lingual society is a living example of how multiculturalism could flourish in globalised and neo-liberalised world. However, at the same time it also discloses the fracture in this diverse society and its reluctance to include diverse forms of gender identity and sexuality. 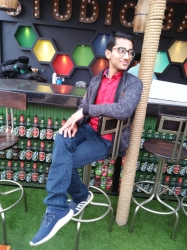 Harshit Agrawal
Harshit Agrawal is a postgraduate in Women’s Studies from Aligarh Muslim University,
India. He is an independent researcher and Junior Research Fellow who works in the field of
gender and sexuality to highlight their intersections in the society. He is actively engaged in
online media platforms likes Youth ki Awaaz, Agents of Ishq, Women’s Web and is a blogger
at Medium.com. Through his articles, advocacy, and research work, he is continuously
creating a space for subalterns’ experiences.