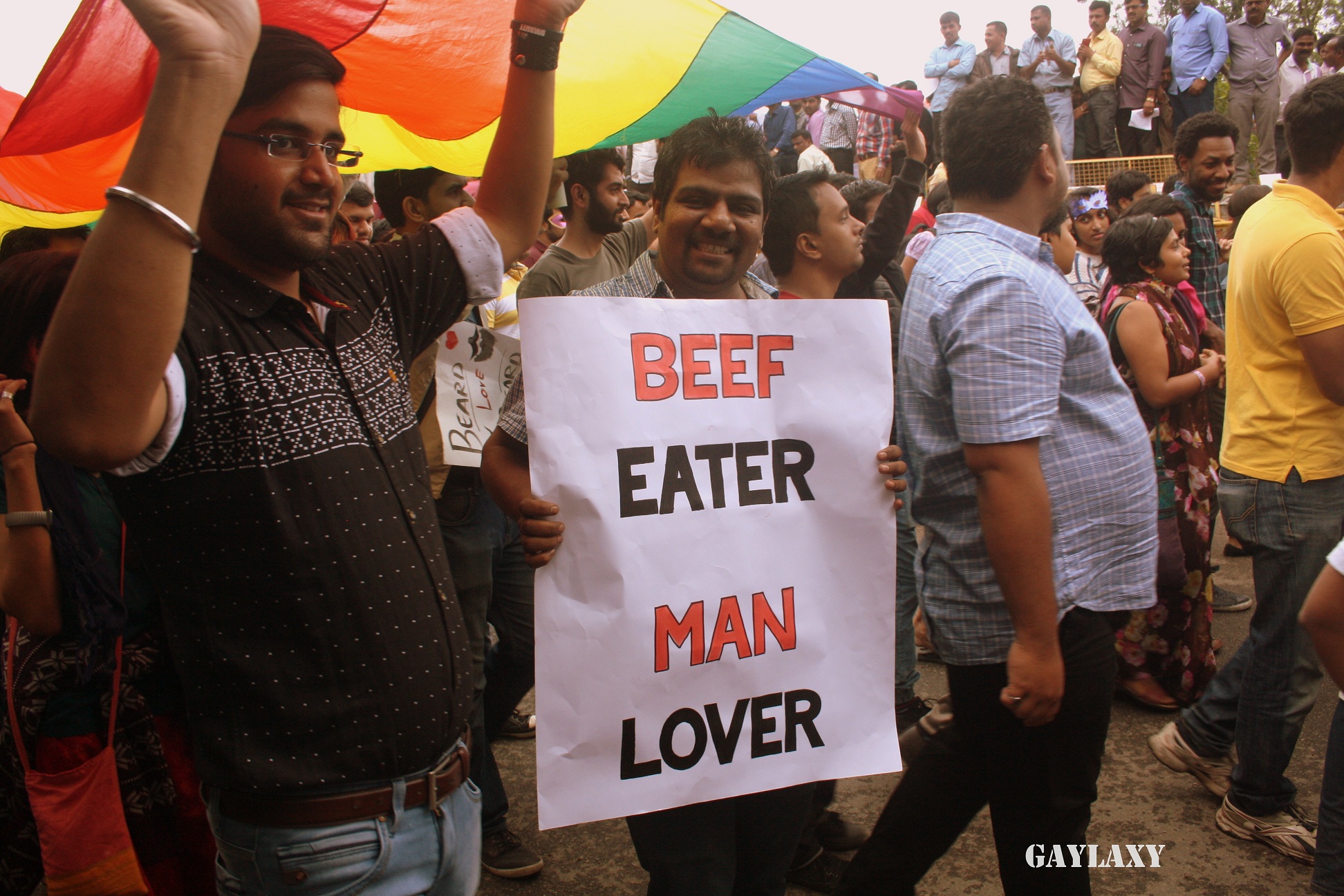 Beef and Queer Pride: An Intersection of Social, Political and Economic Struggles

After attending Bengaluru Pride for a 3rd consecutive year, back home my attention was drawn to a debate started in one Facebook group and carried on in another group too, which was around one particular placard that was displayed in the pride, that read ‘Beef Eater and Man Lover’.

The Debate was about ‘Why should one get the issue of Beef into LGBTQ Pride?” –There were responses explaining about intersectionality, building alliances with counter questions such as ‘How many beef protests ever has included LGBT rights?’ and there were also my fellow vegan friends who brought in the question of ‘Animal Rights’. Hence it moved from intersection to collision of issues.

If the Queer movement is a fight against the control of the state and society over the individual’s desire, body, privacy, sexuality and so on, how can the Beef agenda fall out of the Queer space? Let us not forget that we live in a society where it is not just sexuality and gender that is controlled and conditioned as per its set standards and morals (of a particular caste & religion), but the same has also been done to the food, especially to the food of Dalit, Adivasi and other marginalized people. Just as the queer sensibility which is quite widespread and experienced in society is marginalized into a minority movement, beef eating which is practiced by a huge amount of the population is also marginalized and made into a political, oppressed minority. If Queer movement is about challenging the hetero-patriarchal and gender-binary hegemony, I wonder how it cannot express its solidarity towards beef fight challengingthe right wing and upper caste’s hegemony over food.

The argument of ‘Indian culture’ is not just limited to what an individual wears, what kind of life a woman lives, what do two consensual same-sex partners do in their bedroom… it is the same argument that has been used to decide what one should and should not eat, what food practices are natural and not, and thus makes one acceptable and not!! It would be sheer ignorance to have a blind eye at the social, cultural and political context of food. The state-announced Beef bans to the recent Dadri lynching are evident examples of how people are being targeted, attacked and persecuted based on their food culture.

This is no new scenario, I still very much remember how a Beef festival organized by Dalit Bahujan students’ of Osmania University in 2012 had turned out to be a violent one where the organizers were attacked and a vehicle was set on fire by the right-wing and ABVP leaders. It is interesting to note that this year’s LGBTQ flash mob organized by Queer Campus Hyderabad wouldn’t have happened without the support of the same group that organised Beef festival in Osmania University.

As Audre Lorde says that “There is no such thing as a single-issue struggle, because we do not live single-issue lives”. People’s movements are run by collective of individuals who come with multiple identities and multiple issues. Intersection of these identities and issues is inevitable and it only further strengthens the movements. Expecting each of these identities to be confined to aparticular group and the assumption of having them not to intermingle with each other itself is a voilent thought.

It is this intersectionality that gives us a scope to understand how the whole act of discrimination, oppression is systemic and organized. Won’t the very idea of the so-called exclusive mainstream be dismantled when the marginalized of the so-called margins come together, collaborate and act as collective!!

For something such as LGBTQ movement, which at the moment is largely constituted by the privileged middle class and upper middle class section of the society, it might not be easy to recognize the hegemony of dominant caste & class over food. Dr. Veena Shatrugna, Former Deputy Director at the National Institution of Nutrition surfaces this widespread and deeper hegemony by pointing out how the nutrition planning for the nation constituted an unbalanced diet consisting cereals alone – as they are the cheapest and the most easily available source of 2400 kilocalories which is suggested by Recommended Dietary Allowance. If calories was all it is required, one could derive the suggested calories from potatoes or oil or any one particular food item alone, but when just that one kind of food cannot supplement all essential vitamins, proteins and minerals, what happens to the a larger section of masses whose minimum wage rates and poverty line are linked to the access of this 2400 kilocalories? What happens to the variety of food in a poor person’s plate?

Now there is a very recent scenario of removal of eggs from the mid meals in certain states, not to mention about the government in those states. B12 being a vitamin which is not found in vegetarian foods, is a vitamin which is important in the cell division and deficiency of this can cause anemia, vision loss, pale skin and so on. In spite of the adverse health effects on its people the state would prefer to adhere to its Brahminical understandings in deciding their ‘unbalanced diet’.

This of course doesn’t affect the middle class, upper middle class and rich upper caste who have the privilege of consuming different kinds of vegetables, milk, curds and various other kinds of supplements… but for the marginalized poor it means lack of a balanced nutritional diet.

Having this apart, the most interesting part of debate over the placard was with the clash of the rights when my fellow Vegans took offence of the placard towards Animal rights. Being a vegan for four years, I do understand where the argument comes from.

Vegeterianism is about abstaining from meat where as Vegan diet is one in which no kind of animal products are consumed or used in any manner.

We live in a country where a huge number of adults and children are underweight, malnourished and do not have access to a balanced nutritional diet. The choice of being Vegetarian/Vegan comes from a great deal of privilege of resources and class. It is an undeniable fact that a diet such as vegan at least at this stage is not only an expensive one, but also is very hardly accessible, unless you are an urban, upper middle class individual who has access to certain exclusive resources and vegan collectives. In such a state the whole idea of promotion of Animal rights on the lines of Vegan lifestyle sounds more as an imposition of a particular food choice by a particular privileged class, which chooses to be in oblivion about a larger section of masses who cannot have the minimum required protein and nutrition just through cereals and grains and can supplement the same through a non-vegan diet (cheap meat, eggs, etc.).

There has always been a huge problem with placing of food habits on a moral hierarchical order, which is indeed the result of the Brahmanisation that the society has been subjected to. It is important for the ‘Animal rights’ activists and Vegan promoters to understand that the whole idea of vegan diet being animal-friendly and animal-protecting is nothing but a false one at lot of levels.

What would be the age of Agriculture in human civilization? – ‘Not more than 12,000 years old.’ From the very first stage of agriculture, as it progressed there has been violence in different forms at different levels. The violence is not merely to nature itself but to many other animal species in the form of deforestation and displacement. Post that is the employment of animals for various kinds of labor in the field. So the position of moral higher ground of vegan diet is nothing but a mere assumption.

Rather than a naïve categorization of food into ‘violent’ and ‘non-violent’ boxes let there be an effort towards understanding the identity politics, social, political and economic contexts of food and thereon be sensitive towards it, without which promotion of Veganism/Animal rights would be nothing different from Men’s rights agenda and Caste Hindu’s attack on Reservations.

It is okay for an individual to practice vegan diet to feel better and content at their personal level, but using the same privileged choice of being vegan to accuse others’ food culture is nothing but violence.

And of course not to forget mentioning that I am looking forward for the next Beef Festival in Osmania University this Dec 10th and if you are in Hyderabad please do join.

Beef is our culture,

breath of our soul.

I ask you. Another question:

Who are you to tell me what to eat or not?

Where have you come from?

What is your relationship to me?

have you reared a pair of bullocks?

A pair of sheep?

A buffalo or two?

Have you driven them to the forest to graze?

Have you at least reared a pair of fowl?

Have you once waded into the stream

to scrub and wash their bulk?

nor do you know the number of its teeth.

Don’t know the medicine for its toothache,

Do you know of cattle fuzz?

What, in the end, do you know

— Extract from the Poem ‘Beef, Our Life’ by Gogu Shyamala

Editor’s Note: This post has been updated to include a paragraph that got inadvertently deleted while publishing the post.