I am alarmed with some recent developments. Intrigued and appalled are other two feelings too that have occupied my mind-space. Before we delve into why these extreme emotions have consumed me, let me just ponder over a few jingoistic expressions that elude me. “Being Judgemental” is one of them. I do not intend to judge anyone from the comforts of my existence, but I cannot be a dumb spectator too. Taking stands and having opinions is extremely important in this much divided and polarised environment we live in. I do have very strong opinions about a few Weddings that are now doing the rounds. Weddings of few of the people I knew or were friends with. People who were open about their sexual identity and declared they were gay. The most intimidating thing about this whole thing is, they are all now married (happily?), but  not to anyone from the LGBTQI community. They have now hidden themselves back in the closet in a very conceited and well planned exit from the “community”. I only want to know why? What are their justifications and how do they rationalise such a behaviour?

I came from a remote town in my twenties to a city like Bangalore and went through very trying times coping with the intimidation this landscape and lifestyle had to offer me. Dealing with my sexual identity at that age and time was even more difficult without the kind of visibility the community has these days. I understand how “coming out” in  society like ours can be extremely stigmatised and draining, psychologically to any individual. It was for me too and still is; for many youngsters who are struggling with their identity.  A ray of hope in those testing times was, to see so many brave influencers who walked the prides and aggressively involved themselves in this movement to seek equality. Their presence and voice was inspiring and comforting.

Lot of such individuals have worked very hard and have given their entire lives fighting for the rights of all fellow members of the LGBTQI community. Especially the brave faces from the marginalised transgender communities. It is their work that has brought us to where we stand today. It is extremely discomforting that there are other individuals who posed to be these warriors of justice, while what they did was simply diluting the efforts of all the real voices. These “Other Individuals” take our collective struggle backwards and that makes me angry. Their hunger to be the FACE of the community and the shallow GLAMOUR it offered, probably empowered them to masquerade themselves as messiahs of CHANGE!

They published books, wrote blogs, shot films, wrote and directed plays, gave youtube interviews and always remained in the spotlight of all the Pride marches and gatherings. They even kickstarted Pride marches in many cities and formed many groups that would support and bring together LGBTQI members together. Some of them attended entrepreneurship summits, brought their Mothers to the pride and made them speak to  television channels! One can still find their very emotional coming out interviews where they, with great lucidity and character, talk about why it is important to come clean and not fall into the traps of pressure from the society. They were known as party animals and were almost seen in all the parties and were omnipresent on all chatting and dating platforms. Amidst all the spotlight and stardom, they suddenly GHOSTED !

They are now the invisible folk! Their surnames slowly changed. You realised you were blocked by them on all social platforms. Their old images and articles are now deleted and missing from the world wide web. It was all very conspicuous till you realised that this was not ordinary. It was a well planned, strategised and meticulously planned exit.

They had very intelligently (read criminal) diffused out of the community and merged themselves out into the “normal” world.  Their wedding invitations were out and you heard that they were all now married in a properly celebrated traditional marriage ceremony. There was no way for you to know who they were getting married to, because they did not let that information slip out until their weddings were in place. One can now spot their profile picture with their wives, holding hands amidst flowers against very romantic lighting!

What happened to all their activism? What happened to all that talk about fighting against patriarchy? Nobody has answers! It is extremely hurtful and disturbing to see their brides shy away and smile being clueless of who they are getting married to. Where is the ethics and what happened to this whole lifestyle that they projected and flaunted? Who gave them the right to dilute the struggle of so many individuals who worked so hardly to build this movement? How can one not think about the injustice and deceit? What happens to those guys who looked up to them for inspiration? What happens to all those people who walked the pride because they were inspired by this cowardly bunch?

I have so many questions to ask them! Are you pushing them back Into the closet too? Or is your chord with this side of the wold completely cut off? Will their parents too, force them to follow your path now? What will your straight friends think now about the community? What happens to TRUST?

What you do not understand that what you have done is betrayal on multiple levels. Betrayal to the institution of marriage, to the bride and her family, to the LGBTQI community, to yourselves! Just so-many things that this one decision can complicate and destroy. It is extremely sad and depressing to be a bystander and watch this madness.

In all this, let me clarify that I am not writing this to villainize anyone. My outpouring is more of a monologue that can ignite an introspection. Living a queer life can be extremely difficult. The heartbreaks, the loneliness and the stigma can creep into our souls. The class bias, the obsession with glamor, body shaming, racism and so many other factors can push anybody into a pool of cynicism and disbelief. My question is, How as a community can we come together and fight this out? How can we not alienate people away. How can we grow beyond dance parties and fashion shows to a community that encourages dialogue? How can we build support groups and support systems to help fellow members who are delving Into depression and disbelief fight its as a family? Can we have more platforms which run alongside dating apps, that can bring people together as friends? Can each one of us promise to keep our ears and hearts open so that we can be there for anybody who wants to be heard? When the legal struggle is of utmost importance, is it not equally important to support and accept ourselves first?

While I sign away feeling disillusioned by looking at these wedding pics and rituals, I also carry a heavy bag full of questions. As much as I am disgraced by the decisions these individuals took, especially after claiming limelight as warriors spearheading the LGBTQI movement, it’s high time, we as a community looked inwards. IT IS TIME. 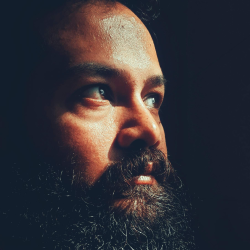 Karthik Hebbar
Karthik Hebbar is a Musician, Theater personality, photographer and writer. He hails from Bangalore. He is a renowned musician and academician in the field of classical music and dance. He writes for many national publications and has a keen eye for photography too.