As of January 2022, same sex marriages are legally recognized and sanctioned to perform over 30 countries across the globe. These countries with their legalization years are as follows: [3]

The Human Rights Campaign (HRC) Foundation tracks developments in the legal recognition of same-sex marriage around the world. According to them, there are four Asian countries out of eight where the world is tracking development of marriage equality.[4] They are- India, Japan, Philippines, Thailand.

The recognition of same sex marriage is considered to be a human as well as civil rights issue and at the same time it brings social, political, and religious dimensions to it. There are countries which have preventive laws to stop same-sex marriages, and some have criminalized homosexuality altogether.

Content analysis is a research tool used to determine the presence of certain words, themes, or concepts within available qualitative data and secondary analysis refers to the use of existing research data to find the answers to a research question. (Iran J Public Health. 2013 Dec).

Online data have been studied and analyzed and articles from relevant journals are taken into reading to understand what impacts the legalization of such bills, especially in South Asian countries.

The pictorial representation for global status: [5]

Evident from map and the data, Taiwan (officially the Republic of China) is the only Asian country as of January 2022 that has legalized same sex marriage in the country. To note the fact, there are 48 countries in Asia today, according to the United Nations.

Canada became the first country in Western Hemisphere to legalize same-sex marriage. It was followed by Argentina (2010), Brazil and Uruguay (2013), Mexico (2015), Columbia (2016), Ecuador (2019), Costa Rica (2020), and Chile in 2021. The United States Supreme court ruled on June 26, 2015, that the Constitution gives same sex couples the right to marry, effectively legalizing same sex marriage in the thirteen states where it was banned. This came amid significant drifts in public opinion. By 2020, 70% of Americans polled approved of same-sex marriage, as compared to 27% in 1996.[6] The only Central American country to recognize this is Costa Rica and some others in this region have limited anti-discriminatory policies.

Javier Corrales, who focuses on LGBTQ+ rights in Latin America points out in his research paper that regional divergences over these issues (specifically in Latin America) are influenced by income levels, role of religion in politics as well as the overall strength of democracy. [7]

New Zealand and Australia are the only two countries in Pacific Rim to legalize same sex marriage.

Same Sex relations are illegal in most of South and Central Asia including Pakistan and Bangladesh. In 2018, India decriminalized the colonial era ban on gay sex by ruling out Article 377 from Indian Constitution.

The case is worst in Middle East and North African countries like Iran, Saudi Arabia, Yemen, Morocco where same-sex relations have death penalties. However, Israel stands apart from its neighbours and recognizes same-sex marriages in other countries (but the bill for its own country lost the votes in 2018). South Africa is the only sub-Sahara African country where same-sex couples can register marriage since 2006.

Before diving into same-sex marriages, we need to understand how same-sex relations are perceived in Asian countries. LQBTQIA+ rights in Asia are comparatively limited and restricted unlike other parts of the world, especially the West. Countries like Afghanistan, Brunei, Iran, Qatar, Saudi Arabia, UAE, Yemen, Chechnya have banned homosexual activities with death penalties.

In South and South East Asia, especially the countries which were ruled by British Empire like Bangladesh, Brunei, Malaysia, Myanmar, Pakistan, Singapore, and Sri Lanka have criminalized same sex relations (with India decriminalizing it in 2018). Brunei, Malaysia, and Maldives also impose Sharia law to prohibit such activities. Dinusha (2016) [9] explains five major socio-cultural factors in South and South East Asia that reinforce criminalization of same-sex relations. They are:

These factors provide functionalist as well as expressionist arguments- to maintain social cohesion and use resources for pressing matters and on the other hand, expressing moral values of religion and culture respectively.

Apart from legal norms in these countries, the societal norms pave a way for criminalization of such relationships. Multi-generational households and long family networks inhibit notions of individualism and privacy. The prioritization of religious views and ethnic harmony over gender equality is apparent in the family laws of retaining jurisdictions. As scholars have noted, libertarian and privacy-based arguments played a critical role in decriminalizing same sex relations in the West. [10]

Legal sanction of such laws is perceived foreign, and countries take a stance of protecting themselves from immoral West. Here is a statement in its support- “Our laws are an expression and reflection of the values of our society and any public discourse in Singapore on such matters should be reserved for Singaporeans. Foreigners will not be allowed to interfere in our domestic political scene, whether in support of the gay cause or against it.”- 2007 by Singapore’s then Minister of State for Law and Home Affairs, Ho Peng Kee.

Here is the file image to represent the status visually: [11]

Economist Intelligence Unit Survey (2019) published a report after surveying 1,901 people—including 339 in Asia—for their report Pride and Prejudice: Assessing Progress in Asia-Pacific. They found out:

45% of respondents agree that Asia-Pacific will eventually embrace marriage equality, versus 31% who disagree. Three in four respondents believe the overall climate for lesbian, gay, bisexual and transgender (LGBT) rights in Asia-Pacific is more open now than three years ago. [12]

Progress in gaining sexual rights is visible across the globe. There are countries which are expected to sanction same-sex marriages in coming years. Despite such rulings, UNHRC has expressed grave concern over violence and discrimination against people based on sexual orientation and gender identity. Therefore, activists on global arena have focussed more on anti-discriminatory and anti-violence campaigns rather than marriage equality. Countries and activists must take it slow keeping the security and health of individuals in concern.

When Asia is compared to West, a lot of other factors come into play apart from legal bodies like religion and family structure. Some countries are still in colonial hangover and one step in this direction would be public acknowledgement of criminalizing same-sex relations by United Kingdom in previously dominion states of Asia. At national level, several reforms could be taken like engaging with public on the issue of decriminalization, working on a legal framework which is inclusive of all sex, gender, and ethnicity, combating child abuse through statutory provisions rather than putting it on existence of different sexual identities as it has been long discredited. Instead of showcasing it as libertarian arguments of West, we can campaign it about being an equality issue. It will reduce the anti-West sentiments and bring substantial effect on multi-generational families of South Asia.

There are some limitations of this research. There is little information on public attitudes towards homosexuality in Central and Southern Asia. It would be interesting to dive deep and analyse the history of countries on homosexuality and understand what holds them back from opening themselves up. The researcher personally believes that constricting people on love does good to nobody. Rather than viewing it from lens of selfishness when it comes to- “do what’s right for you”, we must relearn that it is a phrase of openness. How can expressing your sexuality and love for somebody be unnatural and immoral? When love wins, everybody wins. 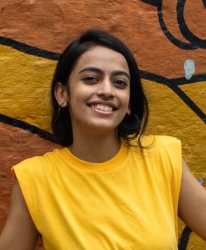 Ramsha Naushad
Ramsha Naushad (she/her) is a post graduate student at Jamia Millia Islamia New Delhi. She has completed Journalism from Amity University Noida and aspires to continue her journalist storytelling ability through quality research. She cares about environment, inclusion and empowerment as well as the magnificence of self-expression.