Chennai All Set For 5th Rainbow Pride, Celebrations Throughout June And July 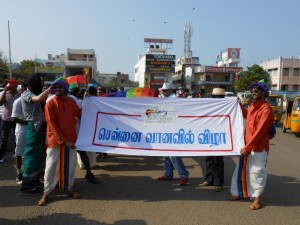 The 5th Chennai Rainbow Pride March will be held on June 30th this year. The pride events in Chennai will commence in June and continue through July. They will include cultural performance festivals, sensitization of self-help groups and other stakeholders on sexuality and gender identity issues, a meet of parents of LGBT children, poster and placard-making sessions, and film screenings.

While pride marches have been organized in India since 1999, beginning with Kolkata, Chennai played host only in 2009 when local groups and collectives working in the areas of sexuality, gender-identity, human rights and health/HIV groups came together under the banner of the Chennai Rainbow Coalition, and organized a series of events in the city culminating in the first march on the last Sunday of June. This was soon followed by decriminalization of homosexuality in Indiaby the Delhi High Court on 2nd July 2009.

The key demands of organizers this year are upholding of the judgment by Supreme Court in the Naz Foundation case that had led to decriminalization of homosexuality in India; non-discrimination and anti-bullying policy at educational institutions; equality in the workplace in terms of policies, benefits and workplace climate and inclusion of sexual orientation and gender identity issues in diversity training for staff. They are also demanding that Tamil Nadu government respond to the October 2012 writ petition from the National Legal Services Authority asking all States and Union Territories to grant equal protection and rights to transgenders as every other citizen of India; and that the Govt continue and build on the work of the Aravani Welfare Board and expand its scope to include sexual minorities who face harassment and discrimination because of their gender identity, gender expression and/or sexual orientation.