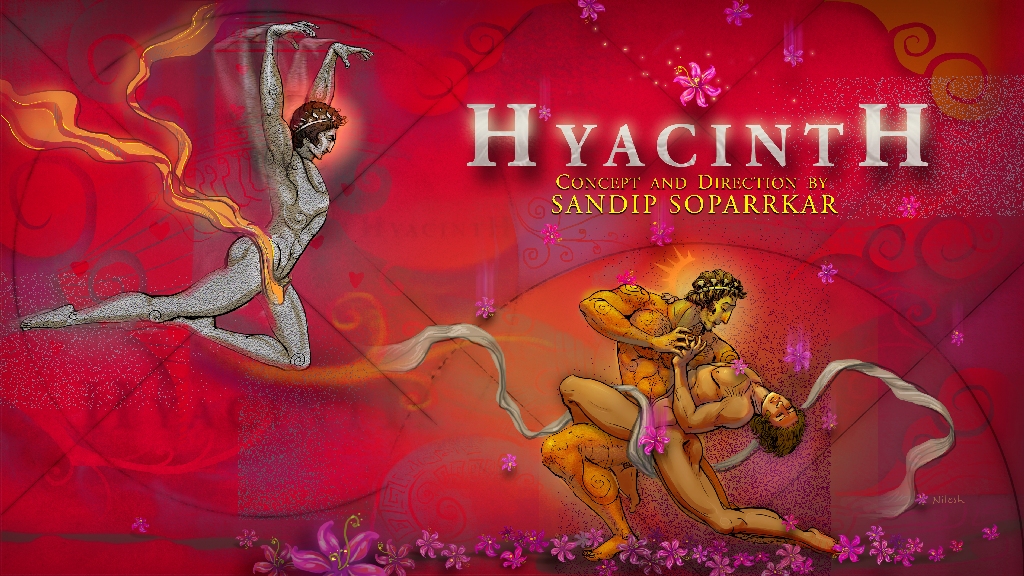 The Humsafar Trust(HST) is India’s oldest registered organization that works on the rights and health of the LGBT (Lesbian , Gay Bisexual and Transgender) Community. Humsafar Trust strongly advocates for the human rights of LGBT individuals in the country by using innovative methods of theatre, film as well as street plays . Humsafar Trust believes that since there is a huge stigma in expressing one’s own homosexual identity, it becomes difficult for LGBT community members to express their love, passion and their relationships. With a view to portray that same sex relationships have passion and emotions, Humsafar Trust has approached dance maestro and celebrity Sandip Soparrkar to direct a Dance Drama that will depict this aspect of the LGBT community.

While Zephyrus blows strong winds that destroy everything in its path, Apollo uses his powers to create an artistic sky. Hyacinth accepts Apollo’s love only to make Zephyrus bitter, angry and envious.

One day as Apollo and Hyacinth take turns throwing the discus, Zephyrus blows a strong wind. As Hyacinth runs to catch it he is accidentally struck by the discus and bleeds to death. The tale makes the wind god Zephyrus responsible for the death of Hyacinth. Apollo wails over the body of his dying lover only to make Zephyrus realize his mistake and painfully regret his actions.

When Hyacinth dies, Apollo does not allow Hades-(God of Death) to claim the youth; rather, he makes a flower, the hyacinth, from Hyacinth’s spilled blood. Zephyrus the wind god promises to spread the flower all over the world.

The two lovers ensure that their lover attains immortality. Hyacinth lives amongst us in this world today as the beautiful flower (Hyacinthus).”

It will be the first time that a noted choreographer such as Sandip Soparrkar will dedicate his time and effort to stand up in support of the LGBT community. The first performance will be held on the 4th October 2015 in Vile Parle East at the Vile Parle Gujarati Mandal, Shraddhanand Road in the evening.

In the back drop of colonial laws such as Section 377 which still plague the Indian Judicial landscape. Hyacinth will again be one of the tools in the bouquet of content that Humsafar Trust presents as a part of its sensitization on LGBT issues. The Humsafar Trust will use such content to sensitize corporate spaces, mainstream audiences, judiciary and parliamentarians alike with poignant portrayals of same sex love, depicting them as sensitive human relationships not limited to sex.

The Humsafar Trust is crowdfunding for this performance around same sex love through Wishberry. You can make your contribution here.