“Homosexuality Not Crime Unless Affects Others”: RSS 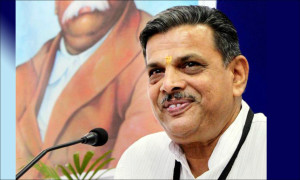 The Joint General Secretary of the Rashtriya Swayamsevak Sangh (RSS), Dattatreya Hosabale’s reply to a question on the 1st of the 2-day India Today Conclave 2016, about criminalization of homosexuality under Section 377 of the Indian Penal Code, marks a softening of its stance, in sync with the tenor of the decision of the Supreme Court of India to refer the Curative Petition in the same matter to a 5-judge Constitutional Bench.

He said, “I don’t think homosexuality should be considered a criminal offence as long as it does not affect the lives of others in society. Sexual preferences are private and personal. Why should RSS express its views in a public forum? RSS has no view on that. It is for people to have their way. Personal preference of sex is not discussed in RSS and we dont even want to discuss that.”

The statement assumes significance in the backdrop of the unyielding stance with respect to homosexuality of the historically and politically significant Hindu nationalist organisation, widely perceived to be the mentor and ideological lodestone of the Bharatiya Janata Party (BJP), the biggest party in the ruling National Democratic Alliance (NDA) coalition and the party of the current Prime Minister Mr. Narendra Modi.

Mr. Hosabale’s explicit statement that homosexuality ‘not affecting the lives of others in society’ is not a crime, and also the acknowledgement of the personal nature of sexual preference, are more in consonance with Justice A.P.Shah’s landmark July 2, 2009 ‘Naz judgment’ in the Delhi High Court which upheld constitutional morality rather than religious or social morality, and underscored the importance of privacy as an aspect of personal liberty, which is protected as a fundamental right under Article 21 of the Constitution, rather than the Supreme Court’s fateful decision on December 11, 2013 which referred to LGBTs as ‘miniscule minorities with so-called rights’.

The 159-year-old Section 377 of the Indian Penal Code, widely considered to be a relic of Victorian-era morality removed by the colonial power Britain itself 40 years ago, penalizes ‘carnal intercourse against the order of nature’, interpreted to mean sodomy, with a maximum ten-year jail term.

The statement also marks a see-saw in the political goings-on in the matter of LGBT rights, with positive views, like Finance Minister Arun Jaitley’s call for amending Section 377 for LGBTs on one hand, and the repeated vote (December 18, 2015 and March 11, 2016) against the introduction of Congress Member of Parliament Shashi Tharoor’s private member’s bill, The Indian Penal Code (Amendment) Bill 2016, for the same reason, on the other.