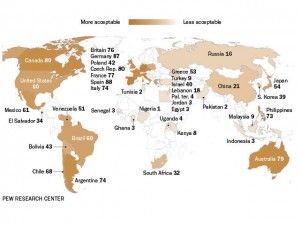 On June 4, 2013, an American based organization, Pew Research Center released its report regarding the global attitudes towards homosexuality. As a fact tank that informs the public about the issues, attitudes and trends shaping America and the world, Pew has been conducting research on various issues of social and political importance through public opinion polling, demographic research, media content analysis and other empirical social science research.

Overwhelming majorities in the predominantly Muslim countries surveyed also reported homosexuality should be rejected, including 97% in Jordan, 95% in Egypt, 94% in Tunisia, 93% in the Palestinian territories, 93% in Indonesia, 87% in Pakistan, 86% in Malaysia, 80% in Lebanon and 78% in Turkey.

Moreover, the report also showed that there was a strong relationship between a country’s religiosity and opinions about homosexuality. There was far less acceptance of homosexuality in countries where religion is central to people’s lives – measured by whether they consider religion to be very important, whether they believe it is necessary to believe in God in order to be moral, and whether they pray at least once a day.

However, there were some notable exceptions. For example, Russia and China received low scores on the religiosity scale, which would suggest higher levels of tolerance for homosexuality but in reality only 16% of Russians and 21% of Chinese reported that homosexuality should be accepted by society. Conversely, Brazilians and Filipinos were considerably more tolerant of homosexuality than their countries’ relatively high levels of religiosity would suggest.

Moreover, in many countries, views of homosexuality also varied across age groups, with younger respondents consistently more likely than older ones to say homosexuality should be accepted by society. Age differences were particularly evident in South Korea, Japan, and Brazil, where those younger than 30 were more accepting than those ages 30-49 who, in turn, were more accepting than those ages 50 and older.

Results for the survey were based on telephone and face-to-face interviews conducted under the direction of Princeton Survey Research Associates International. Survey results were based on national samples. The study excluded India citing concerns about the survey’s administration in the field.