Love, Simon is an adaptation of the book Simon vs The Homo Sapiens Agenda by Becky Albertalli. Just as the book is a fun and emotional read, the film has its laugh out loud and heart-warming moments.

Simon Spier is a senior in high school with a close group of friends – Abby, Leah, and Nick. He is a well-liked and moderately popular kid. As mentioned by Simon, he has extremely supportive parents and a younger sister he adores (but don’t tell her that). On the surface his life is seemingly perfect, however Simon has a closely guarded secret, one he has kept since the age of 13; he is gay.

Simon begins an anonymous email correspondence with another boy from his school, whom he calls Blue. Blue and Simon talk about everything and nothing, slowly falling in love with each other. Simon rides the high of being in love for a while, coming out to Abby in a burst of courage after finding out that Blue was going to do the same during a trip with his father. However, in true high school rom-com fashion, certain events push Simon, his friends, and Blue apart (primarily in the form of Martin) and eventually bring them back together.

Simon begins his day by picking up his friends and driving to the local coffee shop. They all have the same order – an iced coffee – except Abby prefers hers with milk. After the coffee is ordered and paid for, he drives them all to school. Their friendship is the kind you wished you would see more of in high school genre films. They have a healthy respect for one-other which stems from their complete trust in each other, as is evident in Simon’s coming out scene with Abby. She deals with this new information and him pleading with her not to tell anyone else masterfully.

Simon and Leah have been friends forever, and their friendship is treated very delicately because of Leah’s feelings for Simon. Their deep love for each other is prominent in two scenes in particular: the first being after the group finds out about Simon’s attempts to keep Nick and Abby apart by encouraging Leah to go out with Nick because Martin is threatening him with screenshots of his email conversations with Blue, forcing Leah to yell out in frustration that she is in love with him (Simon) and not Nick and that she can deal with him being gay but not with his betrayal.

It must be noted that Martin’s reason for threatening Simon was to get closer to Abby, but after being turned down by her, Martin posts the screenshots of Simon and Blue’s conversations on the school Tumblr blog.

The second scene occurs when Simon profusely apologises to Leah while she is walking her dog and admits to being in love with the boy from the emails. Leah forgives him and encourages him to tell her about this boy. Leah’s unrequited romantic love for Simon never acts as a source of conflict or angst between the two best friends. She is able to prioritise their friendship over her feelings, a rarity in movies featuring teenagers as the central characters. The group eventually reunites toward the end of the film. 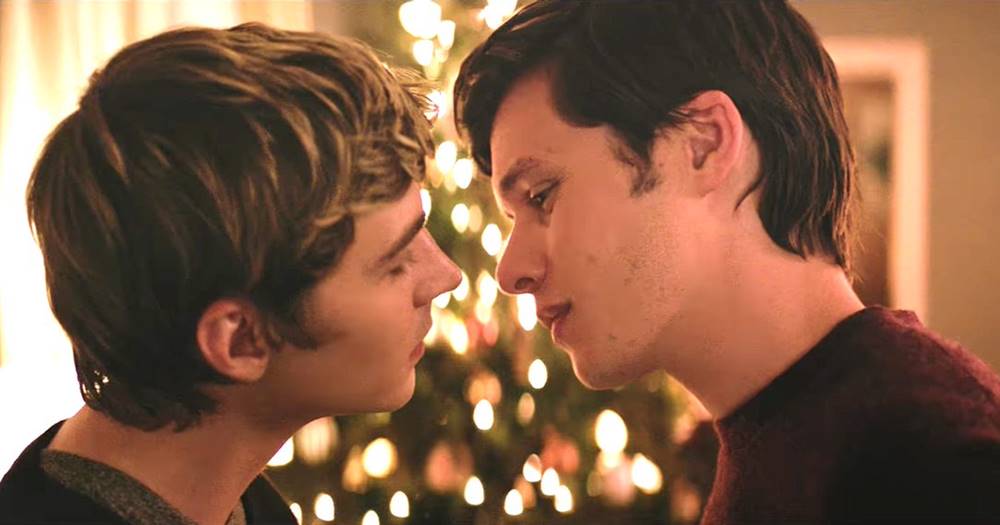 Simon’s life is turned upside down after being roughly shoved out of the closet by Martin. Blue disables his email address, he loses his friends, and is even bullied by two of his classmates, who end up being suspended because of their behaviour. This instance of bullying leads to a bonding moment between Simon and Ethan, the one openly gay kid of the school before Martin’s outing of Simon. When asked by Ethan why he (Simon) did not confide in him (Ethan) about his sexuality, the main reason cited by Simon was that of jealousy – he envied Ethan’s courage to be completely and unapologetically himself. This revelation of jealousy speaks to the closeted experience of seeing people who are proud of their sexuality or gender identity and wanting to be them.

Simon’s coming out to his parents and their acceptance of him is tear inducing – not the sad kind, but the happy kind. His father, tears running down his face, tells his son he loves him regardless and that his jokes about homosexuality over the years were never meant to isolate him. Their conversation ends with Simon’s father pulling him into a tight embrace.

It is, however, Simon’s conversation with his mother that truly makes one want to sob into their pillow. Emily Spier drops some serious truth bombs in the form of motherly wisdom while talking to her son. She says and I quote “As soon as you came out you said “Mom, I’m still me”. I need you to hear this, you are still you, Simon. And you are still the same son who I love to tease, and who your father depends on for just about everything. And you’re the same brother who always compliments his sister on her food even when it sucks. You get to exhale now Simon. You get to be more you than you have been in a very long time. You deserve everything you want”. These are lines that every queer kid dreams to hear from their parents – that their sexuality or gender does not change them, that they are still the people their parents raised them to be, and that they are free to be their true selves.

Simon’s relationship with Blue unfolds over the course of the aforementioned events. He desperately tries to solve the mystery of Blue’s identity, never quite figuring it out. Once comfortable with the fact that everybody is in the know about his sexuality, Simon writes a long post on the school’s Tumblr page thanking his friends and family and asking Blue to meet him at the Ferris Wheel in the Winter Carnival. No one shows up for a while, and Simon grows increasingly despondent, until Bram shows up asking to sit next to Simon on the ride. Bram is Blue. Bram is also one of Nick’s soccer friends, whom Simon has a slight crush on throughout the film. They share multiple kisses at the top of the Ferris Wheel, simultaneously cementing their relationship and declaring it to almost the entire school that has gathered around the ride.

In many ways the characters of Love, Simon break several stereotypes – there is no back stabbing among friends, they are not confined to high school clichés such as the masculine, tough, mean jock, and their relationships with one another are not based on manipulation. Even Martin feels a healthy dose of shame after outing Simon and attempts to apologise to him. He is of course, and for good reason, shut down by Simon.

Teenage angst is central to the film as a product of Simon’s inner turmoil, and the school’s Tumblr is essentially used as a means to spread gossip, but who has been able to outrun either while young. Love, Simon is a wholesome high school rom-com, with a gay protagonist. It is a sensitive film that teaches love, friendship, and acceptance in its purest form.

I hope that this review will contribute positively to the movement demanding that the film be released in India. #ReleaseLoveSimoninIndia

About the Author: Sneha Kumar  is currently in between semi and full adulthood. Writing helps me work out all the complex thoughts I have floating around in my brain.