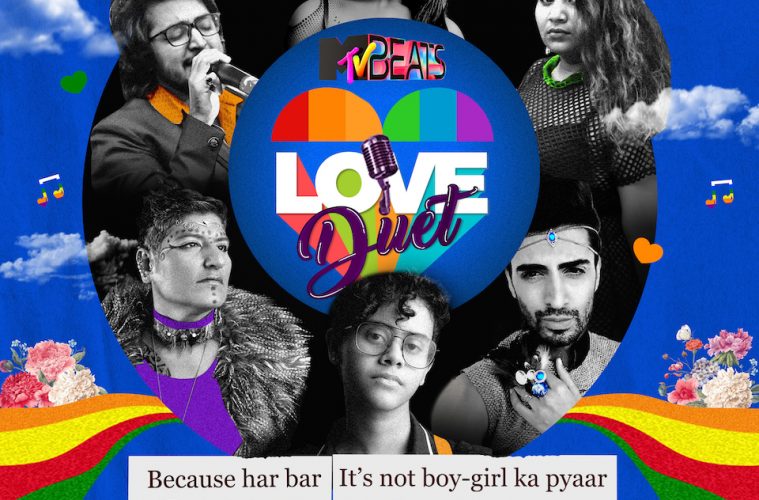 From 1942 – A Love Story to Ek Ladki Ko Dekha Toh Aisa Laga, mainstream Hindi cinema in India has started taking steps to go beyond the conventional norms of gender in storytelling and put the LGBTQIA+ community in spotlight. Unfortunately, for mainstream music, the story is not the same. Amidst the numerous tracks on Raj-Simran, Rahul-Anjali and Naina-Bunny, there are not many gender inclusive songs or even songs that go beyond genders. But not anymore. To celebrate two years of the historic judgement on 6th September 2018 that repealed Section 377, MTV Beats, India’s No. 1 Contemporary music channel has launched MTV Beats Love Duet, a gender atypical love duet album. Created by artists from the LGBTQIA+ community, this album embraces love that goes beyond the ‘boy-girl’ ka pyaar.

With an aim to normalize conversations on love that goes beyond the stereotypes of gender in the Hindi music space, MTV Beats Love Duet, in association with Kitty Su, brings together some of the greatest musicians from the community to spread love through the power of music. From the mesmerizing vocals of Sushant Divgikar, the multi-talented youth influencer along with Shubhangi, Rushik Thakkar and Prachi to the snapping beats by Ma Faiza and the music production by Rtunjya, the best from the community have joined hands to write and compose the album. Acclaimed singer Nikhita Gandhi has also poured in her love with a special track, “Khud Ko Hi Paake” for MTV Beats Love Duet.

Commenting on the initiative, Sushant Divgikar said, “The landmark judgement on Section 377 has been pioneering for all of us and led to significant changes in driving our acceptance. While it has been welcoming so far, the larger social battle is yet to be won and that will only happen if we, as a community strive together for a positive impact. MTV Beats Love Duet is a groundbreaking effort in that direction. As India’s first love album by the LGBTQIA+ community, it beautifully defines and normalizes love beyond genders. Together with some exceptionally talented people, it has been a pure delight to work on this album and echo our thoughts through the power of music. This one is by us for everyone who believes in love in its purest form.”

MTV Beats Love Duet album has 3 songs titled, “Teri Meri Baatein”, “Jashn-e-bahaar” and “Ishq Karle Tu” promising a fine blend of Indie -Pop, Indo -Western and Rap for the music lovers. While Teri Meri Baatein is a sweet rendition signifying love that can start with just simple conversations, Jashn-e-bahaar chronicles the emotion of first love with mixed feelings and the thought of being loved back by the person. Ishq Karle Tu is a bold, confrontational song that challenges the stereotypical notions attached to same-sex love. These tracks will be available on the social media pages of MTV Beats.

Penned by Sushant himself, along with Rushik Thakkar and Rtunjya, Jashn-e-bahaar chronicles the feeling of realizing a different sexual orientation for the first time. Coupled with a zillion emotions of pehla pyaar and pehla confusion, comes an innocent question of the perplexed mind- will they love me back? And the song perfectly captures that with upbeat Indo-western tunes. The song owes it refreshing music to the talented music producer Rtunjya. Sushant has sung in both male and female voices in the song.

Jashn-e-baahar candidly showcases varied emotions with a powerful message of feeling pure, natural love for someone, that’s not bound by any conventional norms. Listen to the song below: