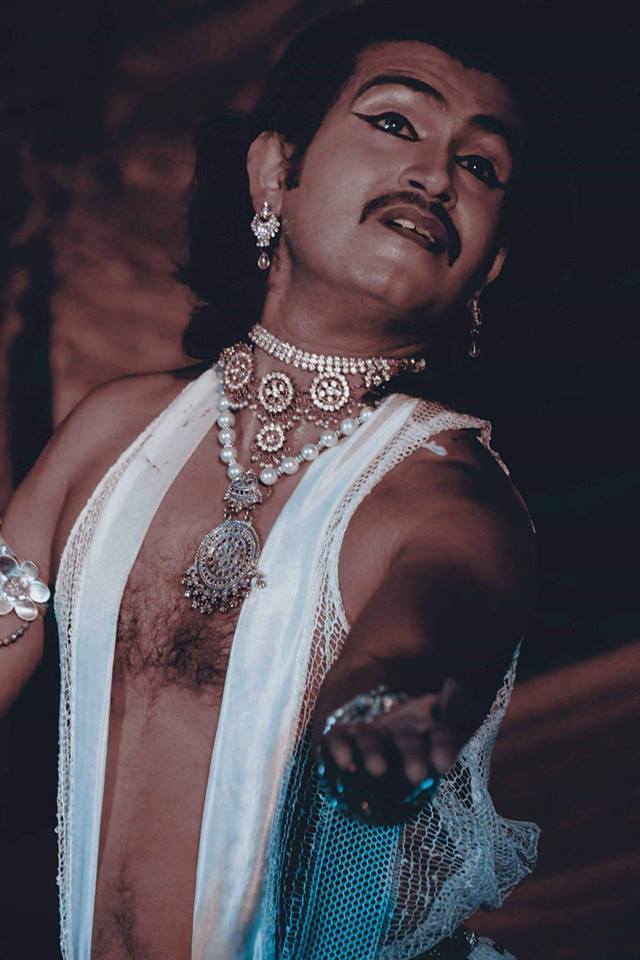 Agni took his time rummaging through his mother’s dressing table drawers. She would have some normal looking wigs hidden somewhere, though lately she preferred the more outrageous ones. Aging had turned Mohini’s taste in make-up and wardrobe a tad gaudy. His gaze rested on her collection of lipstick. How many did she really own? It seemed all the shades of red and brown and purple as well. He picked one that would go with the wig and applied it generously on his broad lips. “What are you doing with my lipstick?” It was as if Mohini grew an extra set of eyes behind her head when someone dared to come near her dressing table.

Agni smiled at her, the untrained application of the purple shaded lipstick making his lips appear comically lopsided. “I completely forgot to tell you Mom, I am playing Draupadi in our college production.”

“Why?” Mohini pursed her lips and wrinkled her brows.

“What why?” Agni was miffed at his mother’s reaction, who was mostly supportive of all his experimentations.

“Why are you playing Draupadi, of all characters?”

“Because I find it challenging.”

“Why do you have to go look for challenges in such extreme and bizarre places?” muttered Mohini as she noticed Agni wearing one of her wigs and a very purple lip color. “And why are you destroying my lip colors?” She snatched the lipstick from his hands and appraised its condition with critical eyes.

“Mom, stop fussing. It’s just lipstick. I will get you two more shades if there is any left in the stores after you looted them.”

“You know that is not my real concern.” Mohini looked like she had bitten into a sour grape. “The part that I am more worried about is that how your girl-friend will feel about you fluttering your eyelashes in a part for a woman.”

“Then who is Mrinalini?”

“She is my friend, not girl-friend.”

Agni looked away from her, his eyes travelling outside the tenth-floor window. His mother just did not understand his relationship with Mrinalini. She was no ordinary girl with mundane insecurities.

“So, stop wearing lipstick for college plays and talk to her,” said Mohini stowing away her Lipstick.

“I know her for less than a year and she thinks I am gay, anyway. So, why bother?” Agni vigorously cleaned his lips with a tissue his mother handed him.

“But you are not. That is the whole point. Why don’t you make that clear to her?”

“Do you hear yourself? How the hell can I just walk up to a girl and tell her that in spite of falling into the stereotype bucket, I am not gay?”

“Sometimes things have to be spelled out properly. Misunderstandings can ruin everything. This stupid World does not understand nuances.”

Agni plopped down on Mohini’s bed and hissed out a long-held breath. His handsome features seemed dampened with a mist of anxiety.

“What is it? Something troubling you?”

“I do want to tell Mrinalini about my feelings, but I don’t know how. She does not take me seriously. I am too deep into her friend zone.”

“Oops,” Mohini grimaced. “Now that is a real problem. It is easier climbing out of the grave then ever coming out of the friend zone of a girl.”

Agni could not help grinning at her solemn expression. She was such a drama queen.

His mother was different from other mothers. She was not possessive about him in the lowly banal way that other mothers are capable of. She wanted him to be happy no matter what it cost her. “I can do anything to make you happy,” she had once told him and that had made him cringe in discomfort. Agni disliked extreme display of affections. He was a mild natured person who hated anything too bright or loud. But now that he was older and a wee bit wiser, he knew how much his mother loved him and had actually meant what she had said. Instead of rebuking him for going after a girl and not focusing on academics, here she was showering concern on the possibility of him being misunderstood by the girl he liked.

Agni was nervous about playing Draupadi. He had definitely bitten off more than he could stomach this time. The college drama team director wanted to prove how gender is not a binary, but a spectrum. The role of Draupadi, the wife of the five Pandavas from Mahabharata, one of the greatest Hindu Mythological epic, had been given to a man and the role of Arjun, one of the Pandavas, was given to a woman. Agni had found the concept fascinating and auditioned for Draupadi’s role.

He wanted to showcase his versatility across characters and genders. But this time he might have gone too far, he thought nodding his head. That is what his best buddy Gautam had told him.

“Just to prove yourself an exceptional actor, must you also play a role of a woman? That is so lame,” Gautam had said rolling his eyes. “It just seems so forced.”

His drama teacher did not think so. He believed that actors should spend a good amount of time exploring and expressing oneself in every way possible, in all dimensions, in both genders. Agni could change his physical appearance by donning a wig and saree and applying make-up, but like his teacher he believed that the real metamorphosis should take place in the mind. To play Draupadi, he had to feel like her, inside and outside.

Sitting in his mother’s room, touching her sarees and dresses that wafted of her favorite perfume was transporting him to that zone. He remembered smelling her clothes whenever he felt miserably unhappy or lost as a child. He would hide in her walk-in closet and spend a long time playing with the soft fabrics. It calmed him down, and made him hum half-memorized Hindi songs fondly. His heightened imagination would turn the clothes into characters he saw on movie screens. A flowing kurta would transcend to a notorious dacoit with a rifle slung over his shoulder. A scarf wrapped around a hangar would shape shift into a beautiful dancer pausing between her stage performance. The belts would hiss at him with beady eyes and slither their way out of the closet to find their next prey. Anything was possible in that universe. To play the part of Draupadi, he would have to go beyond his physicality and insert himself into a new identity.

But his mother was right. There was a new and parallel development brewing in his life that made him anxious as well. It was so inconvenient that at this point in his life, when he felt ready to experiment and push his creativity to a new level, he also felt an intense pull towards Mrinalini. His affection for her had blossomed unexpectedly, almost inconveniently so.

Mrinalini had come from the city of Kolkata to Mumbai for her under-graduation. She was one of those people, whose reputation preceded her. Belonging to a family of actors, she was quite skilled herself but in a bookish way. She had read up everything there was to learn about Indian and World cinema at this tender age and was known to display an irritating variety of superiority complex about that. She wore the halo of hauteur with comfortable slickness and often rubbed people the wrong way with her brash sort of honesty, but Agni never felt like that when he talked to Mrinalini.

They had started conversing randomly during last year’s Malhar. The college festival threw together fascinating music, dance and drama and other artsy events. She had seen him performing at the Experimental Theatre event and approached him with some terribly serious technical questions about acting right after, which much to his embarrassment, he could not answer satisfactorily. She had raised her eyebrows and smiled to that. It was not an unkind smile, more an amused one. She discussed cinema with him like an eager cinephile would, mentioning films and film festivals he had never heard of. They attended acting workshops together and talked nonstop about cinema and its impact. Once he got to know her better he realized that her sincerity and focus made her exterior prickly and was mistakenly interpreted as snobbery by some. She was actually quite friendly, beneath the tough veneer of solemnity and intellect.

Interacting with Mrinalini had changed him in certain ways. He was drifting purposelessly along, content with not doing anything serious before he met her. Seeing her drive to live life with a hankering appetite, he wanted to do more than just floating about aimlessly. Unknowingly she had inspired him to expect more from himself as a person and as an actor.